Your Morning Dump... Where the Celtics Cleverly Thwarted Washington's Scheme 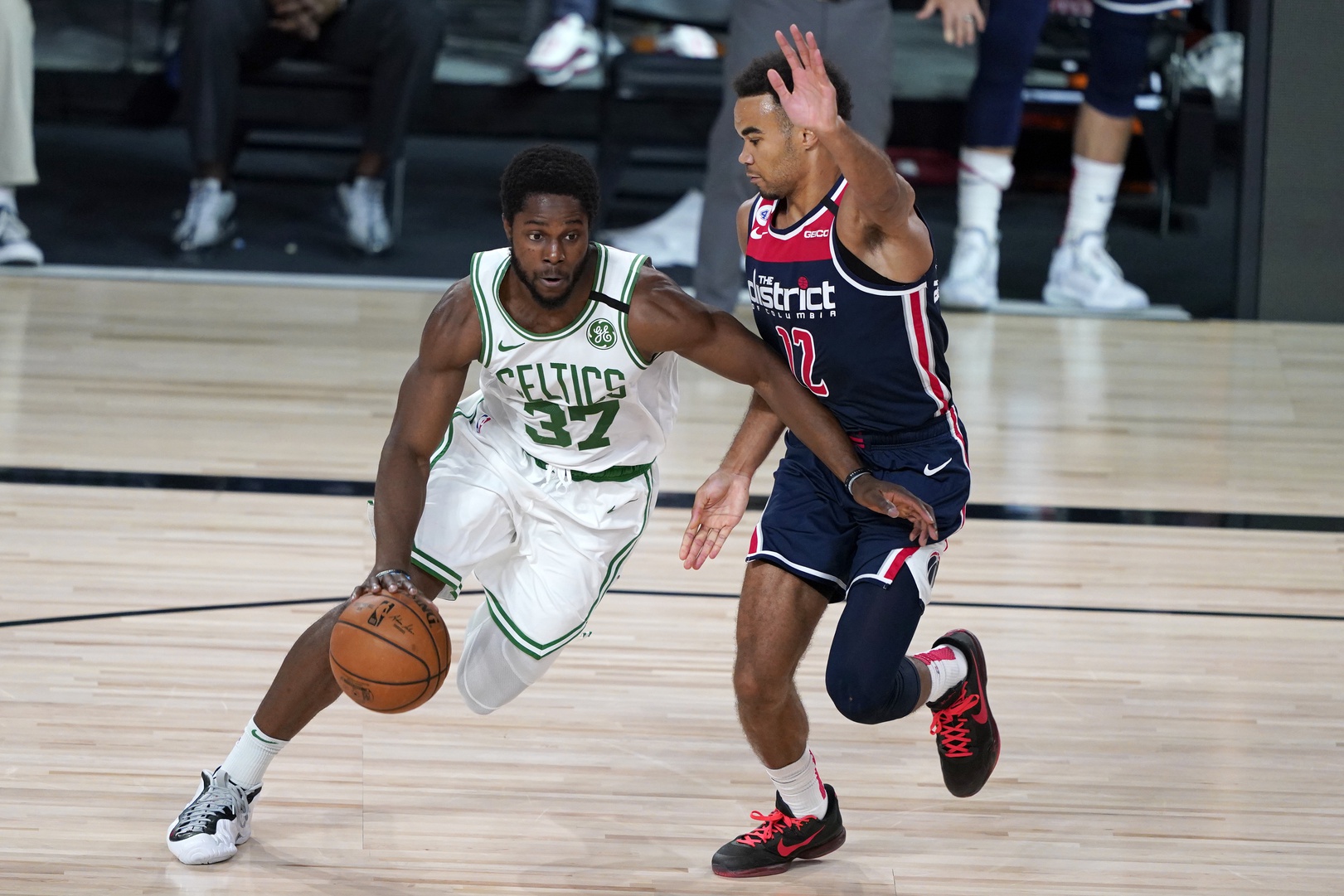 Your Morning Dump... Where the Celtics Cleverly Thwarted Washington's Scheme

Have you ever had to scrounge up a player for a fantasy league? Or replace one at short notice?

I imagine the NBA brass felt something akin to this when they were rounding out the league’s lineup for the bubble season. The top of the Eastern Conference is stacked, but the bottom is, well, not. Not at all. The 7th and 8th seeds are both entering the playoffs with sub .500 records, which meant that the league had to invite some really sketchy playoff “contenders” to the bubble.

One of them was Washington. And the Wizards were a fringe team before Bradley Beal opted to sit out the restart.

Washington nonetheless saw the opportunity afforded by this extended season…

…the opportunity to leapfrog the idle Charlotte Hornets and move down in the standings for better draft position.

Thus they lost seven straight seeding games and did their darndest to lose the 8th, but the Celtics were having none of this and foiled the Wizards’ plan to be as stinky as possible by being slightly worse, thus forcing Washington to actually win a game.

Why am I starting off this morning’s dump with a snarky recap of yesterday’s midday matinee?

Because there really isn’t a lot of ‘news’ so I’m winging it (sorry Chuck).

The Celtics are gearing up to play the Sixers

It’s the team of Joel Embiid, now that Ben Simmons has had season-ending knee surgery, with Al Horford back in the starting lineup for the last five games since the point guard’s injury. Stripped of Simmons’ singular ability to drive one of the most powerful transition offenses in the NBA, it’s a team that will attack a Celtics weakness — interior defense.

And even at that Embiid has recently been plagued by ankle and thumb issues. But even before the Sixers looked like the Celtics’ likely first round opponent, the Celtics’ coaches were deep into their playoff preparation.

“We’ve been looking at Philly obviously with the idea they’re a likely opponent,” Stevens said

Philly is an interesting matchup for the Celtics–in no small part because it looks, on paper, closer than I think it will be in real life.

And why do I say that? After all, the two teams’ records aren’t as far apart as their seeds, 3 and 6, suggest.

I say that because of this additional remark by Stevens:

In the games Simmons hasn’t played they’re the No. 1 offense in the league

Stop and think about that for a moment. This is a team whose whole is less than the sum of its parts. They landed Al Horford over the summer of 2019 and promptly demonstrated that they have absolutely no idea what to do with him, relegating him to bench duty in the bubble because they seem to think he’ll help the team more by playing center.

The C’s played Horford at the 5 because they really didn’t have other options. Center is neither Horford’s natural position, nor, as he gets older, is it a position he likes playing. I think the idea of starting next to Embiid more than anything else factored into his decision to sign with Philadelphia. Instead, the Sixers are playing him at center–off the bench.

The Sixers with Horford and without Simmons are a better team because, frankly, conventional wisdom is stupid. Simmons is a ‘star’, Horford is a guy who, thanks to ignorant fans in Boston, has acquired a reputation for being overrated. But you won’t lose money betting that Horford will make the right basketball play. The same, alas, cannot be said about Simmons who appears content to let his raw athletic ability carry him as far as possible.

“The whole, ‘Let’s break up Joel and Ben’ eternal conversation … we should be talking about breaking up Al and Joel,” Torre told Haberstroh. That is the relationship that is irrevocably broken. That’s the one that is a non-starter. That’s the one that’s doomed. We have all sorts of evidence now, but the eye test and statistical, to prove this. … In no world does Joel Embiid and Al Horford as a pair make sense… “I just hate watching Al Horford play basketball. I just hate it. It’s infuriating,” Torre said. ” … We’ve had four extra months to really contemplate how useless Al Horford is to the Sixers’ ambitions.”

It used to be that I’d get really ticked off when I’d read crap like this.

Then I realized that these guys are basically paid to be circus clowns–to trade in exaggeration and farce.

And then I realized that there are coaches and GMs out there who actually listen to these guys.

Horford has struggled to fit with his teammates, and was recently moved to the bench only to become a starter again after Ben Simmons hurt his knee.

“Starting alongside Embiid the last few games I’ve watched, Al’s an excellent player. Al knows how to play, an excellent player at both ends,” Brad Stevens said after his team’s loss to end the regular season. “He understands what they’re trying to accomplish as a team. Obviously had great regular season and playoff moments for us. We obviously have the utmost respect for him and understand all the things he brings to the table.”

I’ve said elsewhere in this blog that off-court leadership is not a Horford strong suit. If the Sixers landed Horford hoping that he would be a vocal leader who would provide some maturity to a young locker room, they took exactly the wrong lessons away from the C’s disastrous 18/19 season.

And on the court, Horford is not going to look better than his coach. He’s not a guy who fills the void left by bad coaching with rebounds or points.

Which Embiid shows up this series? And how the heck do Celtics defend him?

Despite all their question marks, the Sixers might have the best player on the court in this series and that can never be discounted.

Will we see the Embiid who stomped into Boston in December and put up 38 points and 13 rebounds after pundits questioned his superstardom? Or can the Celtics blitz him with extra bodies and quiet Embiid like they did in early February during a lopsided win at TD Garden?

This is one of my favorite questions: “How will the Celtics stop Embiid?”

When the C’s season restarted, I wrote a little bit about player gravity–how good players bend and warp defenses the way a black hole mangles space. When this happens, it is almost always because the defenders are playing off instinct, not strategy.

The Celtics do not play defense instinctively.

And that game in December where Embiid padded his stat line? It was hardly a blowout. The Sixers squeaked out that victory. With only 25 seconds left in the game, their lead was just 110-109. That game was effectively a tie–if the C’s make just one more basket and the Sixers miss just one more, or turn one C’s two into a three and vice versa, the score is 110-109 in Boston’s favor and the Sixers are the ones fouling to stop the clock.

When Embiid goes off, the smart play is to let him go off. This league has never had a player who could singlehandedly defeat an entire team. But problems arise when the players on the court forget that fact.

MassLive: Boston Celtics vs. Philadelphia 76ers playoffs and TV schedule released | Al Horford is ‘okay’ with not having to play Boston Celtics at TD Garden in first-round series