Your Morning Dump... Where the C's are back in action tonight 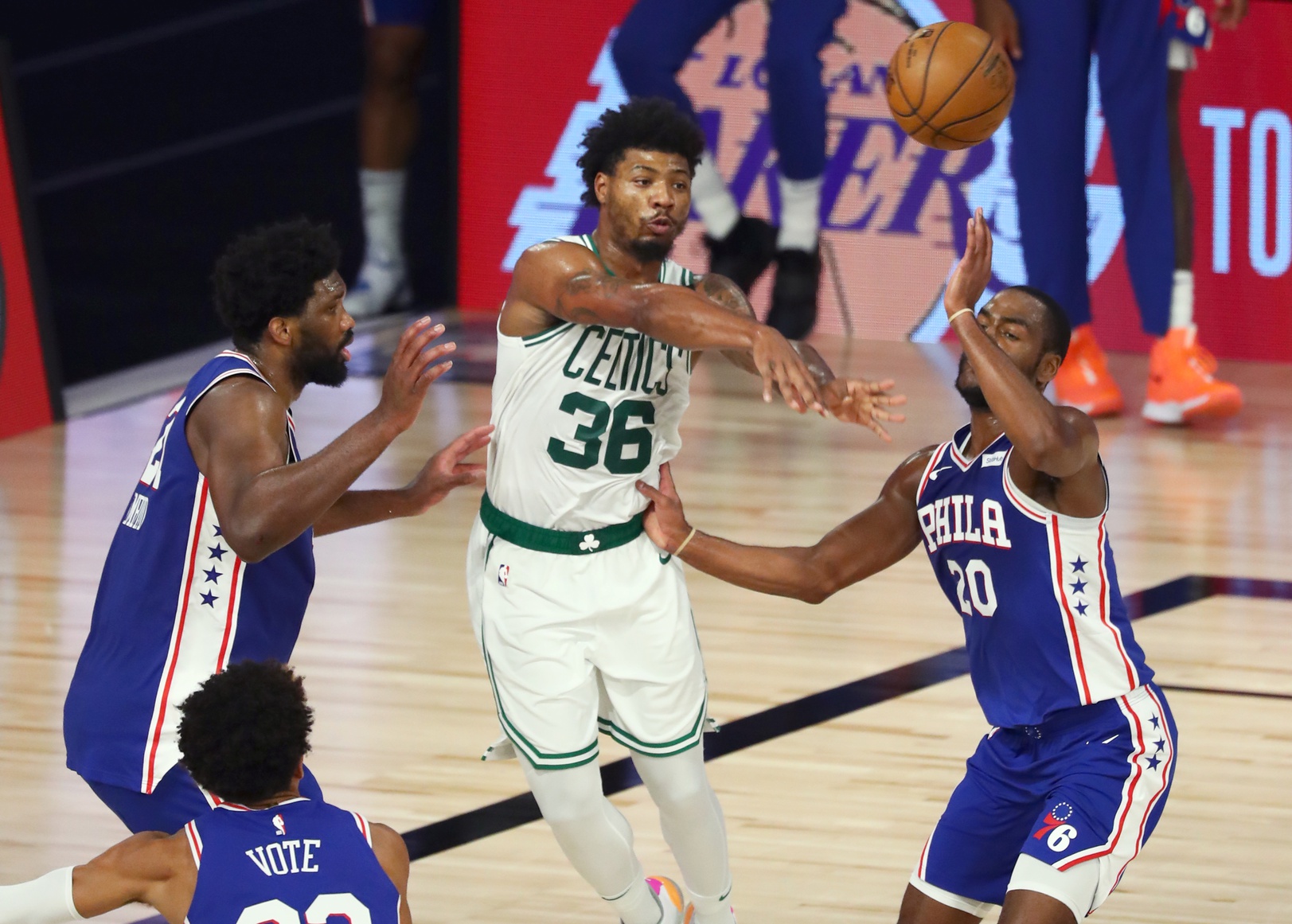 Your Morning Dump... Where the C's are back in action tonight

The Boston Celtics could be without a couple big men in Tuesday night’s preseason opener versus the Philadelphia 76ers at Wells Fargo Center.

The C’s released an injury report Monday afternoon, and the team ruled out newly acquired center Tristan Thompson with a right knee hamstring strain. Veteran center Daniel Theis is questionable to play against the Sixers due to lower back soreness.

Even if Theis does play, it’s quite possible we could see Robert Williams get extended minutes. The 2018 first-round draft pick has played well when healthy, giving the C’s much-needed depth, rim protection and athleticism in the frontcourt. His development is one of the most interesting storylines for the Celtics entering the 2020-21 season.

Yessiree folks, there’s real live basketball tonight with your favorite team in action. Or, I should say, most of your favorite team. If both Williams draw starting nods, we could be looking at a starting lineup consisting entirely of Ainge’s draft picks: Smart, Brown, Tatum, Grant & Rob.

But this is the preseason, and the offseason has been incredibly short. The C’s, moreover, have not been able to incorporate Tristan Thompson or Kemba Walker into whatever new schemes Stevens & Co. have cooked up. Actually, they haven’t been able to incorporate Thompson into any of their schemes, period. Langford is still under wraps, and so even though this is actual competitive basketball, don’t expect to see a work of art.

And please do your blood pressure a favor and refrain from jumping to season-defining conclusions on the basis of what you see tonight. Me personally? I’m expecting a lot of shots that clang off iron at both ends of the court. Especially in the early going.

Over at Boston.com, Tom Westerholm has ten more things we should look for tonight:

3. How much does Jeff Teague have left?

Teague once made an All-Star team, and he’s only two seasons removed from averaging 12.1 points and 8.2 assists in Minnesota, but he turned 32 in June and he started just 17 of the 59 games he played last season.

If Teague just needed a new opportunity, he could be an enormous pick-up for the Celtics — a creator for himself and others off the dribble and out of the pick-and-roll. The Celtics will need point-guard production until Walker returns.

Minnesota is one of those teams that, well, I don’t judge players strictly off what they do for the Timberwolves. It’s a place where all too often, bad players look good and good players look bad.

I think Teague still has something to give, and one thing we know about Stevens is that he excels at maximizing player contributions. Undoubtedly there are still some things Teague does well and he’ll get a chance to do those things once the season starts in earnest.

6. Can Aaron Nesmith space the floor right away?

Stevens has preached caution regarding Nesmith, even while noting the former Vanderbilt wing’s skill as a shooter.

“Aaron Nesmith hadn’t played a 5-on-5 game since January until his first practice, and everybody is asking me if he’s going to be in the rotation or not,” Stevens said. “He was just trying to get down the court. There’s so much growth that we all have to go through. We are just on an expedited timeline here.”

Reading between the lines, many expect Nesmith to contribute right away, since his 3-and-D skill set feels like a natural fit.

Here is one area in particular where I think there’s going to be a lot of overreaction, if Nesmith comes out clanging a bunch of threes and looking out-of-step on defense. I’ve seen multiple people claim that Nesmith’s game is “NBA ready”, forgetting that, in most years, “NBA ready” players basically begin prepping for their rookie season as soon as the NCAA tournament is over. These guys participate in informal competitions with other NBA caliber players not only at the draft combine but also team workouts before the draft. After the draft comes summer league and almost a month of training camp before the first preseason games.

Shoot. Nesmith has only been a Celtic for 27 days and change.

If he looks good, that’s great, because he’s had a very compressed time frame to get acclimated to NBA speed and NBA distances. But if he looks bad, well… that’s pretty much to be expected.

At the Athletic, Jay King has some “musings” about the C’s season as a whole:

5. The Celtics will need more from Jaylen Brown too. I’m very curious to see how his role will evolve in the new team ecosystem. Especially during Walker’s absence, the Celtics could ask Brown to produce in different ways than he has in the past. He could need to run more pick and rolls. He could need to be the focal point of many non-Tatum lineups. Passing has never been Brown’s strongest suit, but his feel has improved and he could be ready to create more offense for himself and others.

A meaningful strength of the Celtics last year was the abundance of creators that they could put on the floor at any one time. Hayward, Walker, Brown and Tatum all had enough ‘gravity’ to unbalance a defensive set creating an opening either for themselves or someone else, coupled with the ability to recognize and exploit that opportunity. But among those four, Brown had the most room for improvement. Without Hayward, period, and without Walker for the first part of the season, Jaylen may need to do more with the ball in his hands. Even if Teague has enough left in the tank to start at point, the C’s will still be down one creator, which means more work for everyone else. This could be Brown’s year to demonstrate the progress he’s made as a ball-handler.

8. Among Boston’s young players, Williams is my leading candidate for a breakout season. He showed as a rookie that he can help a defense while playing either power forward or center. Despite rarely producing anything on the offensive side of the court, he earned playoff minutes — and he deserved them.

Grant Williams was so good last year that not only did most fans forget that he was a rookie, he was conspicuously absent from many of the recent online ‘discussions’ about Ainge’s ability to draft. Williams looked like a veteran out there in his first year. People forgot that not only was he just a rookie, he had been selected late in the first round.

And, that in my opinion, is the highest compliment to Williams’ game that can be given: People forgot that he was a rookie.

I’m not worried about how or whether Williams will improve this season. He will.

It was Williams in a nutshell; spend time fighting under the basket on one end of the floor and then switching onto a small, quick guard on the other. Play big and then play small.

That’s not going to change.

When asked what position he’s been mostly playing in practice so far, he answered “I’ve played everything, honestly. Coach kind of just puts me in and expects me to know every position no matter what it is.” Williams is the team’s multi-tool; a handy piece of machinery hanging on Brad Stevens’ hip that can used in any situation.

“I’ve done a little bit of everything. Same as kind of last year, no set position,” Williams said. “Plus, a lot of guys are out. So it might be different when guys are back like Tristan, or when guys are practicing.”

But the flip-side of that is that much of the game has become somewhat positionless. And it looks like Grant Williams is poised to join Marcus Smart as a guy who can go up against anybody.

NBC Sports: Forsberg: What does a successful C’s season look like?