Your Morning Dump... Where we meet the new guy 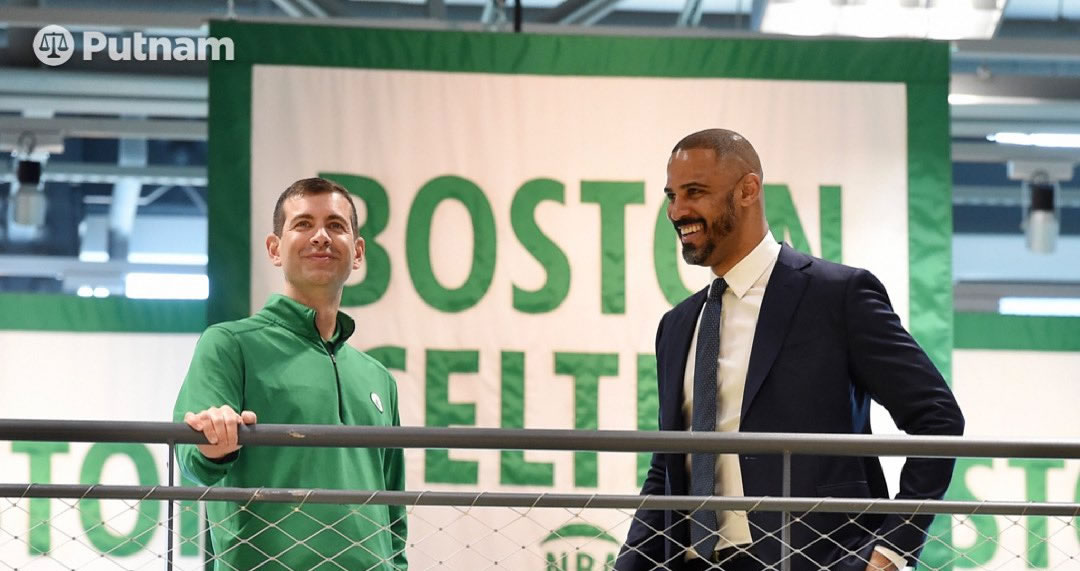 Your Morning Dump... Where we meet the new guy

The Celtics’ core players supported Udoka during the hiring process. Tatum and Brown are good enough to have the power that comes with stardom. They’re also young enough that they both still need to develop. The need to balance those things could be tricky.

Stevens got them as rookies coming from college who had to respect and trust the coach as they found their way. Udoka is getting two All-Stars who already know they’re good.

If they continue to support him, this has a chance to be a great hire. But he’s got to push them to a level they haven’t been at yet. In his final interview of the season, Tatum was asked what would motivate and drive him in the offseason. He talked about being a great player and an MVP. He didn’t talk about winning a championship. For almost every great player, putting a title above all else requires an evolution in their priorities.

I know there are a lot of C’s fans that are over the moon about this Udoka hire—and that more than a few of them are already saying way too much about Nia Long (I suspect these are basically the same fans that got way too involved in speculations about the home life of the Haywards).

I, however, can’t shake a certain fundamental unease about the whole hiring process and Matt Vautour over at MassLive has captured a bit of it.

Udoka said all the right things at the press conference yesterday, but I’m just not comfortable with the notion that guys need to have someone, as Udoka put it, “riding their ass” and pushing them to improve.

At the same time, I might be backfilling my own history, pushing the realizations of my late 20s and early 30s into my early 20s and thus setting an unrealistic standard for maturity on the C’s young stars. At a certain point, you need to demand more from yourself, without needing someone else to hold your feet to the fire.

One of the more untenable conclusions of a legal system that gives kids the right to vote, smoke, buy lottery tickets, enlist and move out at 18 is that by that point you’re substantially finished maturing and more or less an adult. That’s hardly the case; but you can forgive kids in their early 20s for (1) chafing at being called kids and (2) being immature enough not to realize the extent of their immaturity, because basically, they’re accorded the status of full grown adults.

So I guess what makes me uncomfortable with this Udoka hire is that we’ve got conflicting assumptions in back of it.

The conflict is this: (1) We assume that Tatum and Brown are immature enough to need a coach that will ride herd on them, but (2) they are mature enough to deserve a say—and perhaps veto power over—the coaching hire. To me, every argument in favor of one assumption undermines the other…

But the toothpaste is out of the tube, and the C’s seem to have hired a good ‘un. We just need the guys who approved the hire to listen to him.

Page 2: Where the Blazers and Mavs are a mess

Hammon impressed Portland officials and was generally liked among Blazers staffers, sources said. But when Portland reached out for intel from San Antonio figures, the background on Hammon was not nearly as complimentary pertaining to various aspects of day-to-day coaching responsibilities. That sentiment has been echoed by sources around the league. Blazers personnel then cast doubt that Hammon was the candidate to steer the ship through such delicate waters with Lillard.

One of my concerns with Tatum and Brown being involved in the hiring process at Boston is the possibility that the C’s did not hire the best available candidate, period.

By taking a stance that is effectively no different than other players from another era insisting that they would prefer to have a white head coach, I worry that Tatum and Brown have kept the C’s from hiring a better coach in the same way that the C’s would not have won those last two titles in the 60s if Red had followed the prevailing belief that black people were, as a race, less intelligent than whites. Back in ’67, Red did what he always did: he hired the best available, period.

But at the very least, the C’s have not hired a guy with baggage, and there’s more to the Chauncey Billups story than just ‘he-said/she-said’, a police examination the day after the incident found injuries to the woman consistent with rape.

Now you can imagine that the Blazers front office was quite surprised by the blowback that came with the Billups hire, and they honestly have every right to be. The league, as a whole, has been content to let the Billups situation ride for almost 25 years. Billups got a Finals MVP and a whole series of coaching gigs with nary a discordant note voiced. You can forgive Neil Olshey for assuming that people would continue to look the other way.

But once the noise started to be heard, the Blazers front office reacted in a predictable way: Justifying the hire by discrediting other candidates.

In Hammon’s case, the method chosen is predictable.

Essentially, she’s being accused of conforming to gender stereotypes.

‘She’s too disorganized to be a head coach’

Now I cannot imagine a scenario where Popovich would place as much trust in Hammon as he has, if she was not organized and effective at carrying out all the responsibilities her job entails.

But, again, trashing Hammon after the fact is basically trying to justify a decision that the front office didn’t think they’d have to justify.

And that gets us back around to what’s really working against Hammon.

All three are ex-NBA, and all three were hired because players on their teams wanted to be coached by someone with NBA experience.

That is what’s holding back Hammon.

There is this growing myth that only an ex-player can ‘understand’ current players and ‘connect’ with them.

And as long as that myth holds sway, it’s going to be ‘close but no cigar’ for Hammon.

Then there’s the Mavs…

One of the most amazing aspects about the Mavs is the way that whole ‘toxic workplace’ story just dried up without any substantive changes: The Mavs fired a couple people caught in the spotlight, but apparently the front office culture hasn’t changed at all.

And nothing could exemplify that better than the tone-deaf hiring of a coach whose bench record is as pathetic as his off-court behavior is execrable. But hey, he used to play in the NBA so he’s obviously better qualified than anyone with no prior experience in the league. And, I mean, he’s in the Hall of Fame, so that obviously excuses him from being a chronically bad person.