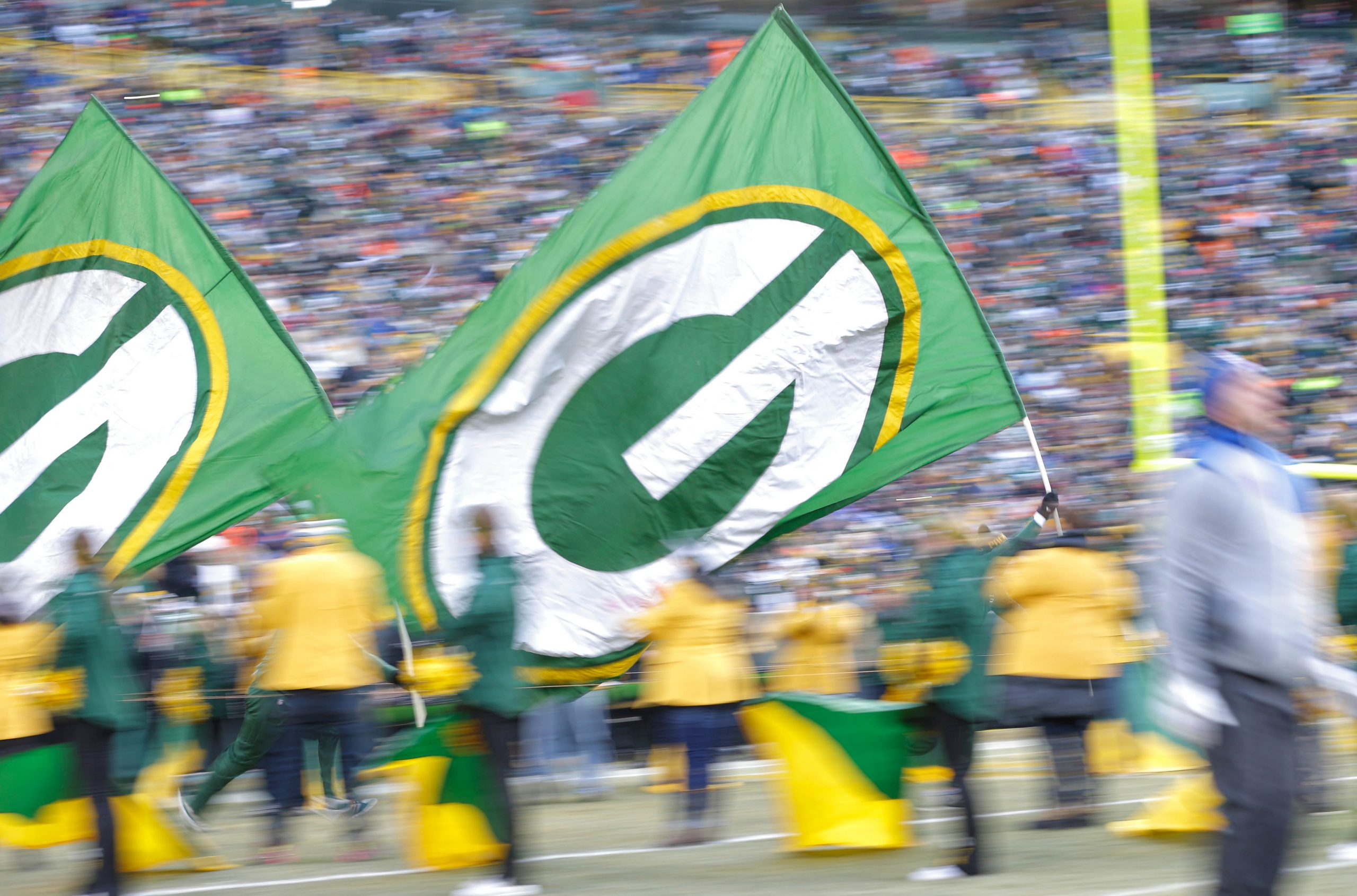 We have reached Thanksgiving, my favorite holiday of the year. How can you beat traditions full of food, family and football? Besides an NFL triple header (which thankfully doesn’t involve the Packers this year), this is a good time for Packers fans to give thanks for the many things they enjoy as fans of the Green and Gold.

I limited this to my Top 10. Feel free to comment on these or to add your own in the comments section. I am also thankful for the people who read my articles and make this column possible. Have a very happy Thanksgiving everybody.

1. 13 NFL Championships, more than any other team.

The Green Bay Packers have won 13 NFL championships, four more than any other team. The Packers won their first NFL title in 1929, the year the stock market crashed to start the Great Depression. They won their last title in 2010 when they beat the Steelers to win Super Bowl XLV.

The Packers are also the only team to ever win three consecutive NFL titles, a feat they accomplished twice. The Pack won three in a row from 1929-1931, two years before the NFL instituted a championship game, and then won three straight again under Vince Lombardi from 1965-1967. The second three-peat included victories in “The Ice Bowl” and the first two Super Bowls.

Over the years, Packers fans have had the privilege of watching 25 Hall of Fame players who spent most of their NFL careers in Green Bay.

There aren’t too many teams who are fortunate to have back-to-back Hall of Fame quarterbacks for a time period that spans 27 years and counting. The Packers have been fortunate to get back-to-back star QBs in Brett Favre and Aaron Rodgers.

The last time the Packers didn’t have a franchise quarterback starting under center (barring injury), George H.W. Bush was president of the United States and top films included “City Slickers,” “Dances with Wolves” and “The Naked Gun 2 ½” featuring an actor named O.J. Simpson in a supporting role.

Favre was under center every game from the third contest of 1992 through the NFC title game for the 2007 season. He took the Packers to the playoffs 11 times, reached two Super Bowls and led the Pack to a 35-21 win over the New England Patriots in Super Bowl XXXI.

Aaron Rodgers took over in 2008 and led Green Bay to eight straight playoff berths that included a win over Pittsburgh in Super Bowl XLV and a 15-1 record in 2011.

Rodgers just signed a contract extension and should be under center for several more years which should be good news for Packers fans.

4. The only NFL team owned by its fans

The Packers are the only team in the four major American sports leagues (MLB, NFL, NHL, NBA) that is community owned. You don’t have to be rich to be an owner of the Packers. A working-class fan can buy a share of the Packers when the team sells shares to raise money.

Shareholders can vote for the team’s Board of Directors and attend the annual shareholder meeting at Lambeau Field.

The Packers don’t have rich owners with large egos like George Steinbrenner or Jerry Jones, they are owned by the fans. If the franchise is ever sold, the money goes to a foundation to distribute it to local charities.

No team has a closer relationship with its fans and its town than the Packers do.

No coach has ever assumed the mythical proportions of Vincent Thomas Lombardi. The Brooklyn native became the Packers leader in 1959 and immediately transformed a 1-10-1 team into a 7-5 club. Two years later, they were champions of the NFL.

Lombardi led the Packers to five NFL titles in seven years, including three straight championships from 1965-67.

The way Lombardi won was at least as important as how many titles he won. He preached a commitment to excellence, or as Jerry Kramer put it, “He loved the idea of winning. To him, winning was an attitude, a state of mind. And it was that attitude that he emphasized, that he demanded. ‘I will demand a commitment to excellence and to victory,’ he said, ‘and that is what life is all about.’”

Bart Starr recalled how Lombardi outlined his philosophy in his first meeting with the team. “‘Gentlemen, we are going to relentlessly chase perfection, knowing full well we will not catch it, because nothing is perfect,’” Starr recalled Lombardi telling the Packers. “‘But we are going to relentlessly chase it, because in the process we will catch excellence.’”

Many of Lombardi’s players found his influence extended well beyond the football field.

6. Lambeau Field one of the best venues in all of sports

The Packers play in the best stadium in the NFL, Lambeau Field. In ranking all 31 NFL stadiums in 2015, The Sporting News ranked the Packers home as the best in the league and simply summed it up by saying, “Simply put, it’s the NFL’s best fan experience.”

Lambeau Field has a college atmosphere and the tailgating is outstanding with beers and brats usually figuring prominently on the menu. There isn’t a bad seat in the house and the fans are loud and enthusiastic but almost always respectful and welcoming of visiting fans.

Add the history of Lambeau Field and you’ve got the one NFL stadium that is on most football fans’ bucket list to visit.

The tradition was started by safety LeRoy Butler back in 1993 and it again involves something that serves to unite the team and its fans. After scoring a touchdown against the Raiders, Butler jumped into the stands and celebrated with the fans in the front row of the end zone.

The celebration quickly took off and “The Lambeau Leap” became a tradition at Packers games.

Other teams occasionally try to imitate it, but the Packers made it happen first and do it best.

The NFL’s oldest rivalry is between the Packers and the Bears and dates back to 1921. The Bears were then known as the Chicago Staleys, but the two teams began battling then and haven’t stopped fighting for division titles and bragging rights since.

The Lions and Packers have played each other every year since 1930 which is the league’s oldest continuous rivalry (the 1982 strike canceled both Packers-Bears meetings that year).

Add the Vikings who only joined the league in 1961 but have as fierce a rivalry with the Packers as any team and you’ve got a mix of tradition and competitive football that brings out the best in players and fans alike.

It’s a tradition that dates to the Lombardi Era, although nobody is sure exactly when it got started. During training camp, Packers players ride bikes to practice, bikes that are supplied to them by local kids.

This is a unique link between the players and their young fans. “You choose a kid and their bicycle and just get to focus on that individual kid, to get to know the kid and figure out what they like to do and who they are. It’s a direct connection,” former Packers safety Ha Ha Clinton-Dix told SI Kids in 2017.

“I don’t think there’s a tradition anywhere that will top it,” Clinton-Dix added. “Being able to touch these kids’ lives…it’s moving for me, and I think it’s a memory they will have forever.”

It’s also one of the great traditions associated with Packers football.

10. A History of Great Receivers

The Green Bay Packers have been blessed at the receiver position over the years. Davante Adams is the latest in a long line of excellent receivers that date back to the early days of the franchise.

It started with Hall of Famer Don Hutson, likely the most dominant receiver of all time. Hutson led the NFL in receiving during eight of his 11 NFL seasons. In 1942, Hutson led the league with 74 catches. The next highest player had just 27. In fact, four of the league’s 10 teams caught fewer passes than Hutson that year.

This is the deepest and most talented position in the 100-year history of the Packers franchise and a group Packers fans have had the privilege of watching.