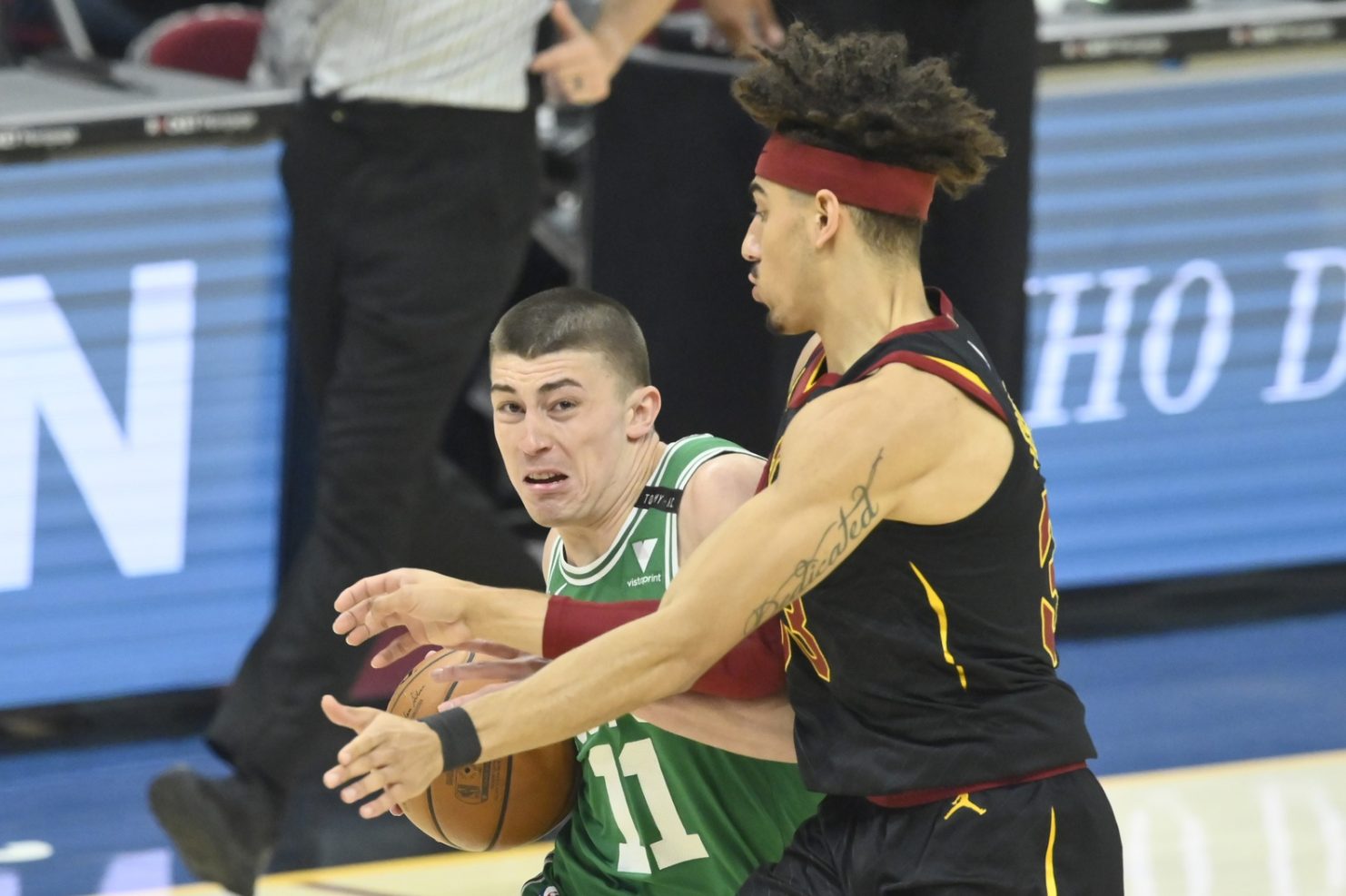 Yeah. Um. That game sucked. Payton Pritchard’s face in that header image up there just about encapsulates how I feel.

The Celtics just do not have much fight left in them, and tonight it seemed like a lot of the problems stemmed from a morose lack of engagement.

I don’t entirely blame them. The health issues that’ve persisted all year haven’t gone away. The loss of Jaylen Brown was the icing on a s**t-cake that had been baking for weeks and arguably months…but it’s the Cavaliers, man. The team’s defense has been subpar even at relatively full strength, and without JB, Smart and Rob, it’s piss-poor.

All they had to do was not sleepwalk in Q4. The mistakes that had already happened in the game could’ve been bygones if they stayed somewhat together. But they slacked off, gave the Cavs an opening and Kevin Love and Collin Sexton made them pay.

One immutable truth about the Celtics in the Brad Stevens era: If they move the ball, they often succeed. If they fall into ruts of ISO-ball, they often fail. You don’t have to be an expert basketball analyst—I most certainly am not—to recognize that.

sorry is Tremont leading the Celtics with 3 assists

Not a joke. Tremont Waters did indeed lead the Celtics with 3 assists. Only Aaron Nesmith and Luke Kornet even reached 2. (Jayson Tatum, for what it’s worth, had his usual excellent numbers, ending with 28-8-1-2-2, and he’s not usually a playmaker in general, but him having only 1 dime is still pretty abnormal.) Boston ended the contest with 14 assists, whereas Cleveland had 27. Whatever the latter’s other flaws, they were executing the nuts and bolts of offense well, and it eventually paid off.

3. Bummer night for the young fellas

The best you can hope for a game like this, win or lose, is that the younger players get some extended reps they wouldn’t otherwise get. If not for the piss-it-all-away-at-the-end way the Cs lost this game, the result would matter very little to me in itself. (After everything that’s happened this season, what else do you expect me to say about these final matches?)

What made it even more of a drag was seeing most of the youth fall short. Nesmith didn’t capitalize on his starting opportunity. Grant Williams, who had looked solid after a long time on the shelf just two games ago, was absolutely lost. Luke Kornet had 3 blocks but little else of note. Romeo Langford looks physically adept and is otherwise a total question mark. Carsen Edwards was, not surprisingly, a goose-egg. Jabari Parker (who is, strictly speaking, young) didn’t see the floor, though that’s probably for the best. (Not that it cost a lot of money, but the Parker signing seems like yet another roster-construction mistake.)

Pritchard did OK from a scoring perspective to hit 15 (though not an efficiency one, shooting only 39%) and again showcased impressive rebounding for an undersized guard (7 boards). Tremont Waters also stood out to me—not in terms of numbers, but effort. I’m not entirely sure what his future is, with the Cs or as an NBA player, but he does his best to make the most of the chances he’s given. He’s actively trying in spite of his physical limitations and minimal playing time. That’s more than can be said of some people on the Boston bench who’ve played more minutes this season than he has.

Although the Celtics might be able to fall to 8 before the regular season ends, it’s mathematically impossible to fall to the 9th seed. As such:

The Pacers are one of the few teams to deal with as much demoralizing s**t as the Celtics, and are in open revolt against their apparently weirdo micromanaging coach. The Celtics could probably beat them. The Wizards always have a chance, against pretty much any team, because of Bradley Beal and the history-making Russell Westbrook, but their bench and the ineptitude of Scott Brooks make it a coin-flip. The Cs could potentially win that one was well.

So they have to lose twice to avoid an actual playoff series.

I just don't want to see Brooklyn bro. I'm not here for all the Kyrie narratives, the Nets pick discourse, etc. Please I'm begging you just let Milwaukee put us out of our misery

This is my nightmare, like Colonel Kurtz envisioning the snail crawling along the edge of a straight razor and surviving. And I’m saying this as someone who kinda likes the Nets, up to and including Kyrie and Harden (Blake Griffin super ultra mega sucks, though). It’ll be insufferable. Facing the Sixers and inevitably losing would be just as horrible. So please, please…if the Cs must reach the Actual Playoffs, let it be Giannis and the Bucks who take us out to the woodshed.

5. The toxic discourse is still toxic and stupid even when games (and things in general) suck this much

We’ve already responded in two different ways to the latest expulsion of acid-drenched feces commonly known as “a Dan Shaughnessy column about a team other than the Patriots in the Tom Brady era.” I don’t need to belabor that specific thing much more other than to say…when’s the last time you heard Shank write about the Cs during an inspiring season like the Hospital Celtics 2017-18 run, or even last year’s campaign?

Besides, he’s not the only problem. Even aggregating him with Bill Simmons, Ryen Russillo, the freaks at WEEI/98.5 and others of their kind doesn’t fully encapsulate the problem. More than any other market except possibly Philadelphia and New York, Boston sports media has made a commodity of rage. Especially about the sport that clearly ranks last in their hierarchy of interest. (The last time people like Shank and Felger gave a damn about the Celtics was probably when Chris Ford coached the team.)

Here’s a little micro-example, regarding Scalabrine:

Not sure what Scal is getting at with the “not sure why Tatum didn’t go downhill all game” thing. He’s taken 16 of his 26 FGAs at the rim and only two non-paint 2’s.

Scal is either stupid (very possible) or made s**t up to fit a narrative he shrewdly knows A Certain Type Of Boston Fan will eat up. This is far from the only time Boston media figures and even, say, high-profile Celtics Twitter people have done this. It’s toxic, dishonest and stupid, and makes an already depressing fandom environment even worse.

“OK, sure,” you’re saying, “but who cares about fans being happy if the team sucks this much?” Ordinarily that’d be a fair question. But look at it this way:

The Celtics had blatantly f**ing obvious on-court problems throughout the season. Of course they did. Anyone who won’t concede that is just as dishonest as the toxic jackasses described above, but there simply aren’t many Cs fans who are quite that ostrich-headed.

The issue was that the things they couldn’t control (injuries, COVID-19) were so pervasive. Thus, there wasn’t nearly enough time to really dig into the gameplay problems (uneven effort, inconsistent defense, an intermittent, problematic proclivity for ISOs that gummed up the offense) that, with practice and dedication we know they’re capable of, they could’ve potentially solved. They screwed up plenty on their own, but never had a real opportunity to fix it. The sooner we recognize that as fans, the sooner we can move on from this hellhole of a season. 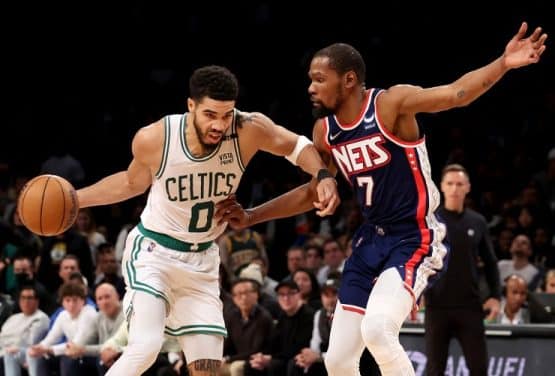 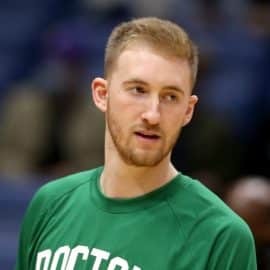