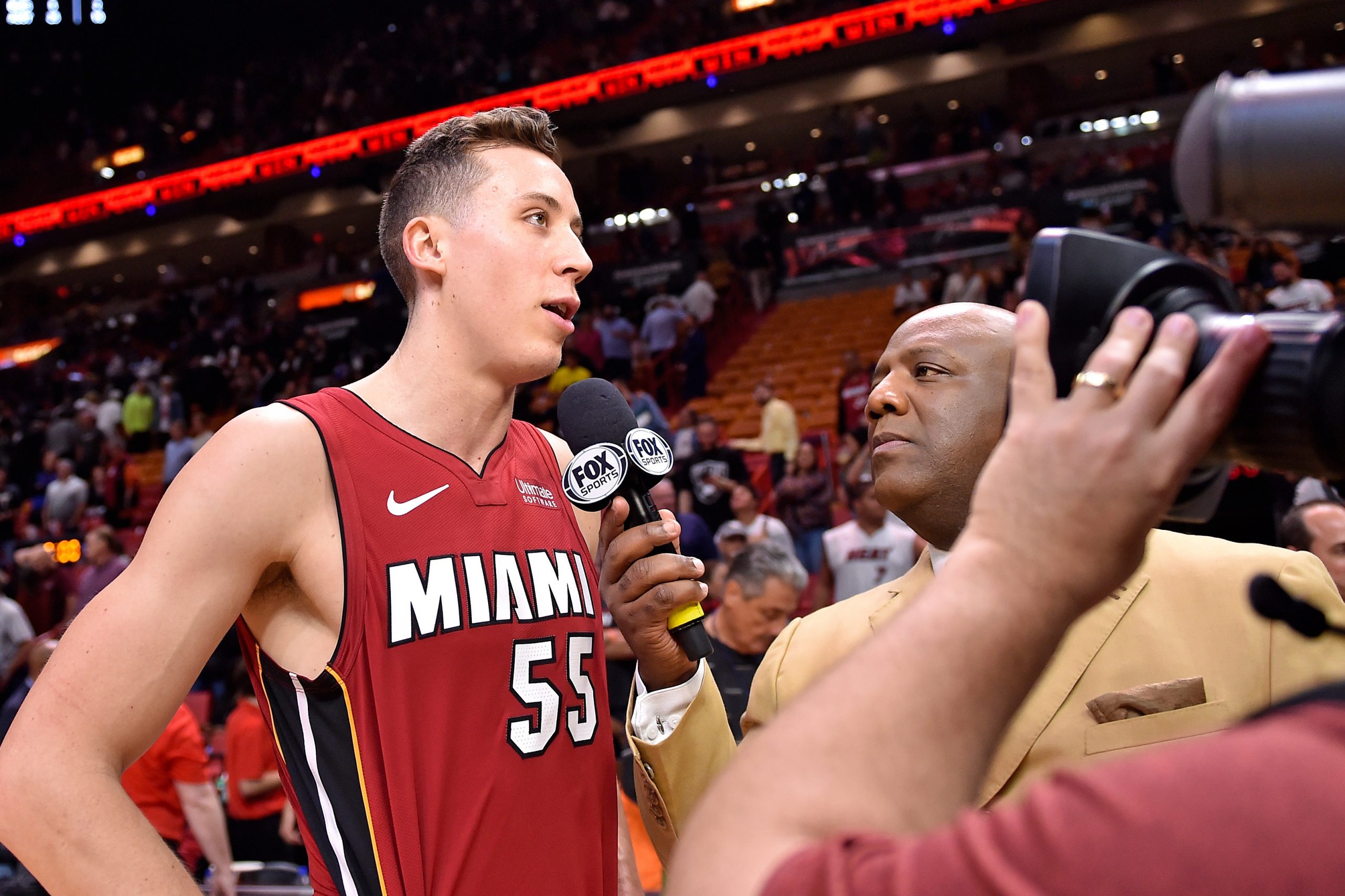 Unless you’re a fan of the Heat or University of Michigan basketball, you probably don’t know who Duncan Robinson is, and neither do some of the coaches on the Cavaliers apparently.

The 25-year-old forward went off in the first half of Miami’s game against Cleveland on Wednesday night, which was a prediction caught by some of the best online betting sites (see this list), putting on an absolute clinic from 3-point range with eight made triples, the most ever by a Heat player in a half.

Heat's Duncan Robinson couldn't miss in the 1st half 😳🔥

During the game, a fan caught what appeared to be a member of the Cavaliers coaching staff attempting to look up Robinson on a phone.

Funny thing is, Cleveland’s head coach, John Beilein, was actually Robinson’s coach at Michigan. Safe to say he of all people should know all about Robinson’s shooting ability, but the rest of the staff must’ve not gotten the memo.

Robinson finished the game with a career-high 29 points on 9-of-15 shooting.

Anthony Davis returned to New Orleans for the first time since being traded to the Lakers.  Certainly a daunting circumstance for even your most stoic and strong warriors but, come on… you couldn’t expect this to go well, right?!?! And, of course, fans at Smoothie King Center treated him exactly how we thought they would.

Davis was booed before the game even began, and it continued once the contest tipped off at center court.

It began during pregame introductions, where the boo birds were out in full force.

It then carried over into the game itself, literally every time Davis touched the ball in the opening minutes.

Brow getting all the boos in NOLA

Fans also cheered quite loud when Davis missed the Lakers’ first shot of the game — a midrange jumper that caught the back iron.

To his credit, at least AD did go back and face the music — rather than taking a load management day.

Vince Carter is still playing in the NBA, even at 42 years of age, but he probably wishes he wasn’t on Wednesday night, judging by what happened on one particular play in the Hawks’ game against the Bucks.

Carter was unlucky to have been matched up against reigning MVP Giannis Antetokounmpo on a play in the game, and that was rather unfortunate for him.  It’s a little unreasonable to expect this once legend of the court and now a little past his prime to be able to guard the beast that is Giannis.

And Giannis took advantage of it.

Antetokounmpo drove the lane, then delivered a forearm shiver that sent Carter backward — nearly knocking him down. Carter briefly recovered, but then Giannis dunked all over him.

Ouch. That was a touch sequence for the seasoned veteran.

Kyrie Irving didn’t play in Wednesday’s game against the Celtics at TD Garden, but fans of the home team didn’t really care.  One might say that it’s a fun, but difficult time to be a Celtics fan at the moment but I digress.

Irving missed his triumphant return to Boston due a shoulder injury, and he didn’t even make the trip for the game. It certainly could’ve been because he didn’t want to face the music and hear it from fans.

Celtics fans, however, did not seem to care. They chanted “Kyrie sucks!” multiple times throughout the game, starting just minutes in. And they were loud.

It’s hard to imagine what type of reception Kyrie would’ve received had he actually been in the building — let alone play in the game.