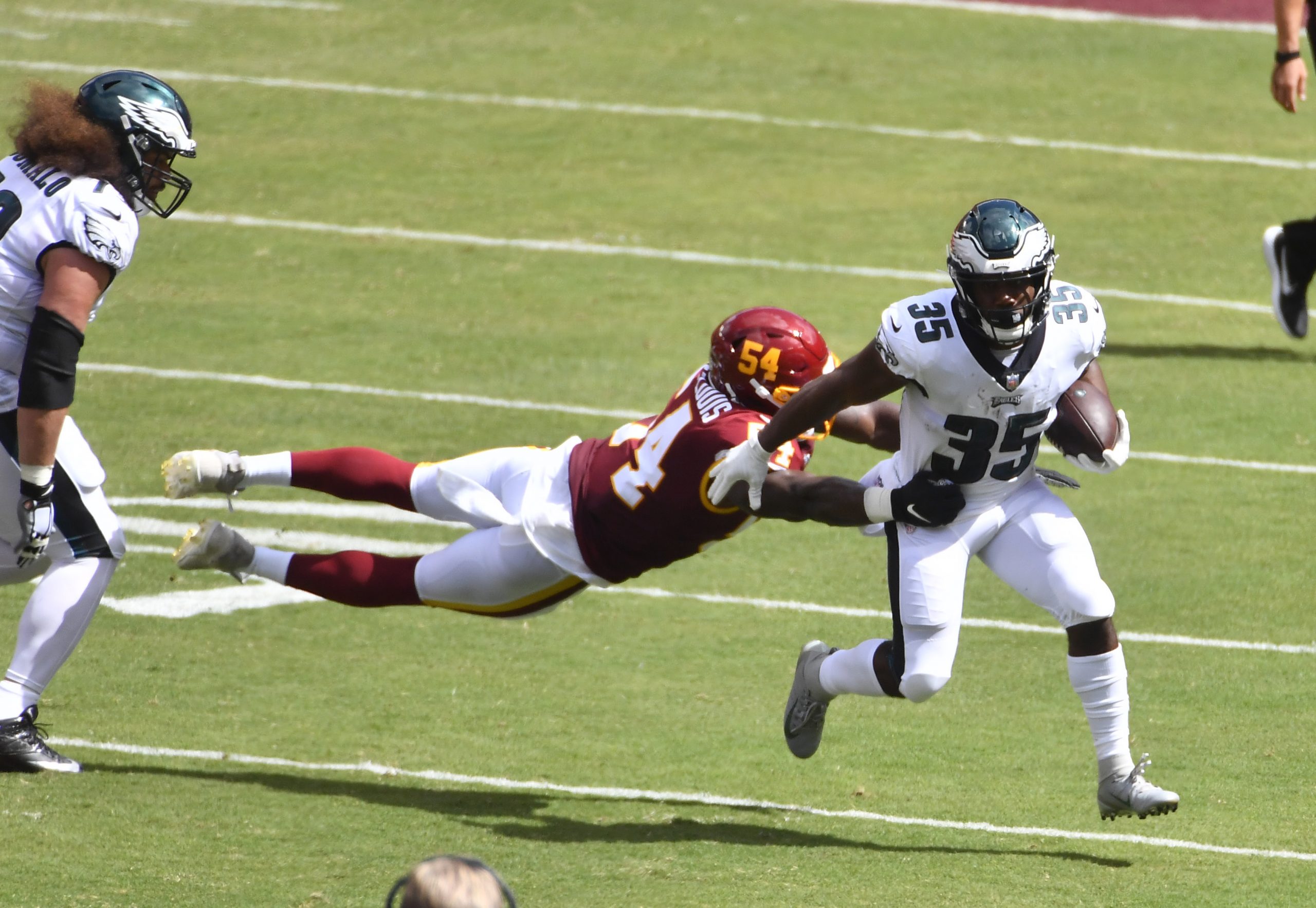 In that contest, the Eagles leaned on their running game, racking up 123 yards on the ground (101 in the second half). Washington’s front seven stymied Philadelphia’s rushing attack in the first half, holding them to 22 yards on nine carries.

However, Eagles head coach Doug Pederson realized for his team to get back into the game, they had to get their trio of running backs (D. Sproles, M. Sanders, and J. Howard) involved,

Unlike last season’s regular-season opener, the Eagles neglected their running game on Sunday, which was just one of the reasons why Washington defeated them, 27-17, at FedEx Field.

Heading into their Week 1 matchup, Philadelphia was without second-year running back Miles Sanders, who was dealing with a hamstring injury.

Without Sanders, the Eagles had to use the likes of Boston Scott, Corey Clement, and Jason Huntley in their backfield. All three running backs are capable of providing Philadelphia with some production in both the passing and running games.

But Eagles head coach Doug Pederson decided not to commit to run on Sunday. Instead, he dialed up 42 pass attempts for starting quarterback Carson Wentz, behind a patchwork offensive line that was getting annihilated by Washington’s front seven.

Meanwhile, the Eagles’ trio of Clement, Scott, and Huntley only had 16 carries for 55 yards. Scott led the team with 35 rushing yards on nine carries, Clement added 19 yards on six carries, and Huntley received one carry for two yards.

Those numbers are completely unacceptable, especially when the Eagles’ patchwork offensive line couldn’t hold their blocks long enough for Wentz to make a competent pass.

After the game, Pederson spoke about the ground game’s ineffectiveness against Washington.

“The way we started the game with the tempo, we felt comfortable there,” he said (h/t NJ.com). “We didn’t do our best in the run game. That’s an area we have to clean up and make the necessary corrections. Listen, I don’t necessarily know in-game if we are throwing or running. I just know that we are going to execute the play called and do our best to try to score.”

Granted, Pederson is right in that the tempo to start the game had Washington’s defense on their heels. The Eagles’ offense was able to do whatever they wanted through the air and imposing their will.

However, one could also make the case that when the tempo slows down, and you have a 10-point lead going into the second half, you need to run the ball. It’s just that simple!

The last time the Eagles had less than 60 rushing yards in a game was last season against the Atlanta Falcons.

In that Week 2 contest, where Philadelphia lost 24-20, Wentz coincidentally threw the ball 43 times, while Sanders and Howard had a disappointing 46 yards on 18 carries.

Nevertheless, it was a perfect example of not leaning on your running game and trying to win the game through the air.

The Eagles (0-1) will now prepare to take on the Los Angeles Rams (1-0) next Sunday at Lincoln Financial Field. Philadelphia hopes that Sanders is ready to go as they are facing a Rams’ defense that gave up 136 rushing yards to the Dallas Cowboys.