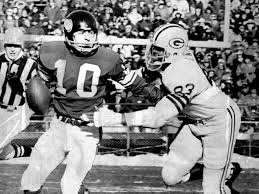 In 1972, the 8-4 Green Bay Packers headed into Minnesota to take on the 7-5 Vikings in a battle for first place in the old NFC Central. A victory for the Packers and they would end the Norsemen’s string of four straight Black and Blue Division crowns.

Few experts expected the 1972 Packers to be very good. The previous season, the team finished 4-8-2 under rookie head coach Dan Devine who had been very successful in the college ranks at Missouri but was new to the NFL. But the Pack mixed a few experienced veterans from the Lombardi era like linebackers Dave Robinson and Ray Nitschke, wide receiver Carroll Dale and center Ken Bowman, with young talent like running back John Brockington, cornerback Willie Buchanon and kicker Chester Marcol.

The Packers had one of the best running games in the NFL that season with Brockington and MacArthur Lane combining to create a strong one-two punch. The duo blocked well for each other and both ran effectively. Brockington finished the season with 1,027 yards to become the first player in NFL history to rush for more than 1,000 yards in each of his first two seasons in the league, while Lane added 821 more yards and led the team in receiving with 26 catches.

It was a bitterly cold day in Bloomington, Minnesota, then home of Metropolitan Stadium, now the site of The Mall of America. The temperatures hovered around minus-two degrees with a wind chill of minus-18 at kickoff.

“It was so cold, you had to find an old cleat mark [on the field] to put your cleats in,” John Brockington recalled in Joe Zagorski’s book, “The Year the Packers Came Back: Green Bay’s 1972 Resurgence.” “They were trying to heat the field up with heaters, but you couldn’t do anything on that field. We were like stuffed dogs.”

This young Packers team knew going in that magnitude of this game. “We went into the game knowing that if we won,” remembered Devine, “we would go to the playoffs. It was that simple. Before the game, I told the team in the locker room to play this game to win… and they did.”

The game started as a typical “Black and Blue” division slugfest with both defenses dominating. The score was 0-0 after the first quarter.

The Vikings finally broke the ice on a second-quarter drive aided by a pass interference call against Packers cornerback Ken Ellis. On third-and-goal from the one, Tarkenton handed off to tight end Stu Voigt on a tight end around and Voigt scored. The Packers trailed 7-0 at the half.

In the second half, the Packers offense started to move the football on the ground. Lane swept right behind blocks by Bill Hayhoe, Malcolm Snider and Bill Lueck for a 37-yard gain. That set up a 36-yard field goal by Marcol that got the Packers on the board and made the score 7-3.

The Green Bay defense stepped up on the next drive and forced a big turnover. Safety Al Matthews hit Vikings running back Bill Brown and forced a fumble that linebacker Fred Carr scooped up and returned 26 yards to the Minnesota 28. Five plays later, Scott Hunter scored on a one-yard quarterback sneak and Green Bay led 10-7.

The Packers defense forced another turnover on the ensuing drive which gave the Packers another big scoring chance. Tarkenton tried to throw to his big-play receiver John Gilliam, but the ball bounced off his hands. Safety Jim Hill tackled Gilliam while Buchanon stepped up and grabbed the lose ball, returning it 25 yards to the Minnesota 28. Four plays later, Lane broke a tackle by Eller and ran in from three yards out to give the Packers a 17-7 lead.

The Packers benefitted from an offsides penalty called against Page on a punt to pick up a key first down midway through the fourth quarter. The future Hall of Famer was called offsides on two consecutive plays and had to be taken out of the game for a few plays when he lost his cool at the referee.

The Packers drive ended with a 42-yard field goal by Marcol and Green Bay’s lead was now 20-7 with just five minutes left in the game.

An interception by Ellis set up the Packers final score, a 10-yard field goal by Marcol that made the final score 23-7. At the final buzzer, the Packers players carried Devine off the field on their shoulders.

The Packers ran the ball effectively against the Vikings in the cold. Brockington finished with 114 yards on 25 carries while Lane added 99 in 19 rushes and a touchdown.

Vikings coach Bud Grant gave the Packers credit after the game. “Green Bay deserved to win,” he admitted. “They played better than we did.”

“It’s a young team with a lot of ability,” Robinson said of the Packers after the game. “We are like a vast, raging river. The veterans are the channel in the bottom of the river. We keep it going straight.”

The victory gave the Packers their only playoff appearance of the ’70s and their only division title in a non-strike season between the time Lombardi retired in 1968 and when Brett Favre arrived in 1992.

The Packers were unable to build on their 1972 success. The following year, they slipped to 5-7-2 and then 6-8 in 1974. Devine left Green Bay and headed back to the college ranks to coach at Notre Dame. He was succeeded by Bart Starr who served as the quarterbacks coach and play caller in 1972.

The Packers have another chance to go into Minnesota and clinch a division title Monday night against the Vikings. It brings back the memories of what they accomplished in 1972 on the frozen turf of Metropolitan Stadium for one of the team’s few highlights during the ‘70s.