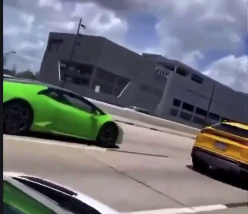 Rockets superstar James Harden doesn’t have all that much time until he’s scheduled to join his teammates in the Orlando “bubble,” so he’s trying to make the most of his precious hours until then.

It will be quite a test for Harden and the rest of the NBA, as they’ll be living in this so-called “bubble” for between two and three months, with the league resuming its regular season via an eight-game format, and the playoffs to follow.

That could be why Harden busted out some of his favorite toys, with some of his friends, on Thursday. He and rapper Lil Baby, as well as G-Five, among others, went cruising around the Houston highways in Lamborghinis, because that’s what real bosses do.

Sirens could be heard at the very end of one of the Instagram Live videos, so we wonder if someone got pulled over.