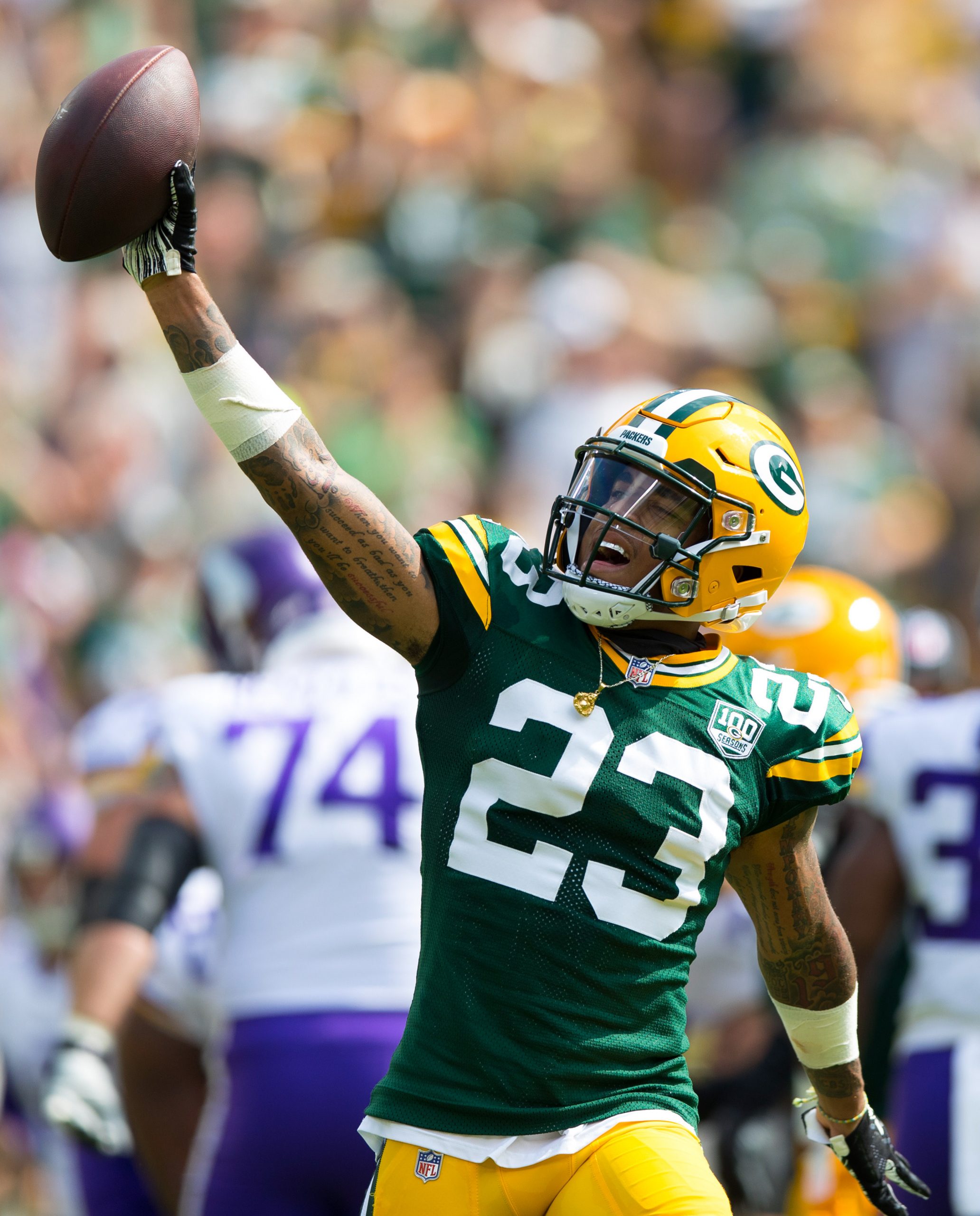 Injuries and upheaval were a big part of the Packers secondary in 2018. By the end of the season, starter Kevin King was out with an injury, starting safety Ha Ha Clinton-Dix had been traded to Washington while backup Jermaine Whitehead was released midseason. Veteran cornerback Davon House was injured early in the season. When depth players throughout the secondary also missed significant time due to an assortment of injuries, cornerback Tramon Williams was moved to safety to solidify that position.

The team addressed the secondary in both free agency and the draft. Former Bears safety Adrian Amos was signed as a free agent while Darnell Savage was selected after the Packers traded up with their second pick in the first round. Additional players were signed to add depth and compete for jobs in the nickel and dime packages.

The Packers need to concentrate on creating more turnovers this season after intercepting just seven passes a year ago. Only the 49ers had fewer picks in 2018.

On paper, the Packers have more talent and more depth in the secondary than they did a year ago. If the team can keep more of their starters healthy, this could be a deep, athletic group that should also benefit from the improved pass rush this defense should provide in front of it.

Here is a look at the Packers secondary as they enter training camp:

The Packers starting DBs provide a good mix of youth, speed, size and experience. King has the size at 6’3”, 200 pounds. He has been a good cover corner when he’s been healthy, but that has been an issue in each of his first two NFL seasons. King has played in only 15 of a possible 32 games thus far in his NFL career and started 11. When he’s in the lineup, the secondary is much more consistent.

Alexander had a very strong rookie year and is likely to establish himself as the team’s best cover corner. He’s fast, anticipates well and has a lot of confidence that CBs need to succeed in this league. If he takes the projected second-year jump, he could be in contention for a Pro Bowl berth. Alexander needs to improve on last year’s single interception, but otherwise he has the potential to become a shut down corner with hard work and the proper coaching.

Amos should add stability to the secondary. Clinton-Dix was very inconsistent and while he made some big plays, he gave up a lot more of them. Amos is more conservative and positionally sound, something the Packers have lacked at the position in recent seasons. He will also add leadership to a young group.

Savage looked strong in OTAs and has coaches and teammates alike talking about his positive attitude and willingness to play fast and hit anything that moves in front of him. Expect him to make his share of rookie mistakes, but also expect him to improve his play as he gets more comfortable playing at the next level.

Williams is an experienced DB who can play outside, as a slot corner or move inside to safety. He has seen it all in this league and while he is not as quick as he was in his prime, knows the game well enough to compensate with anticipation and savvy. He is a great locker room leader as well.

Jones is a bit of an enigma. The Pack selected him in the second round of the 2017 NFL Draft, but he has yet to establish himself as a starter at safety or the hybrid safety/ILB position Mike Pettine likes to employ. In his first two seasons, Jones started only 12 games including just five last year. Undrafted free agents were starting ahead of him. Jones asked for a trade during OTAs but is still with the Packers. If he remains with the team, he has the talent to be in the team’s DB rotation but must play better than he has thus far.

Jackson had his struggles as a rookie last season. He appeared in all 16 games, starting 10 and was credited with 10 passes defensed but failed to intercept a pass. Jackson’s lack of elite speed may make him a better candidate in the slot or even at safety. He is better suited for zone coverage than man-to-man. The Pack is hoping for a jump in Jackson’s play as he starts his second season in the NFL.

The Packers picked up Brown on waivers after cutdown day and he was activated from the practice squad in late September. The undrafted free agent has good speed and showed promise in the 11 games he played for the Packers. Brown forced two fumbles and broke up five passes while playing solid positional safety. He should be a rotational DB and special teams player again this year.

Greene made the team as an undrafted free agent out of James Madison a year ago. He recorded five tackles and one quarterback sack in eight games before being sidelined with an ankle injury in December. The Packers liked what they saw out of Greene and he should continue to play on special teams and add depth to the secondary.

Holman was selected by the Pack in the sixth round of this year’s draft out of Toledo. He should at least make the practice squad if he doesn’t make the team. He is a great story and hard worker who runs a 4.37 40-yard dash. He will need to work on his technique to succeed at the next level but should contribute on special teams as a rookie.

Hamilton was signed as an undrafted free agent after playing at Ole’ Miss. In addition to playing corner, Hamilton has some experience returning both kicks and punts. He intercepted three passes during his career at Mississippi. He will have to shine on special teams in order to make the team or the practice squad.

Jamerson was with the Saints and Texans before joining the Packers late last season. He played in two games with Green Bay when injuries struck the secondary. Jamerson has 4.4 speed and is a good player on special teams, both of which should help him compete for a roster spot.

Matthews is a first-year player out of Auburn with good size. He was in training camp with the Vikings last year and was briefly on the Colts practice squad before the Pack signed him to their practice squad in early December. Matthews has good size and is best fit for the hybrid SS/ILB position in Pettine’s defense. He is a strong tackler and could also do well on coverage teams.

Redmond is a corner who has struggled with injuries throughout his three years trying to make NFL rosters. He was a third-round pick of the 49ers but missed his rookie season with a knee injury. He later was on the Chiefs practice squad and the Packers practice squad before the Pack activated him in early November. Redmond played in five games for the Pack predominantly on special teams before being placed on the injured reserve list again in late December. Redmond needs to stay healthy and recapture the form that got him drafted in the third round in 2016.

Tyson played safety in college at Cincinnati, but the Seahawks drafted him and converted him to cornerback. He later spent time on the Texans practice squad before the Pack signed him off waivers in mid-May. Tyson plays a physical style and is best suited as a press corner. He can also fill in at safety. In 10 career NFL games, Tyson has been credited with five total tackles.

Sullivan is a CB who played five games with the Eagles last season, starting one. The Georgia State alum made 11 tackles and had one pass defensed last season. He is a smart, heady player and was the first Georgia State player to be invited to the Senior Bowl. He should contribute on special teams and to provide depth in the secondary if he makes the roster.

Rouse played both safety and linebacker during his college career at West Chester. He had eight career interceptions in college and recorded three pick-sixes in 2016. He has good speed and even ran indoor track during college.  He is also very positionally sound and has good football intelligence.

Ento is a converted WR who played offense at Colorado. The Packers are trying him at CB in training camp. Ento has a very good vertical leap although his 40-time was a very average 4.53 at Colorado’s pro day. Ento has a lot to learn to play regularly on defense, but he could see action on special teams and if he shows enough promise, is a potential practice squad addition.

The secondary should be a deeper, stronger group. Amos and Savage should solidify the safety position while the combination of King and Alexander would be a strong one at corner. The depth should be improved also, assuming injuries don’t strike as frequently as they did a year ago. If the pass rush is more consistent, that should make the secondary more effective as well. Don’t be surprised if Alexander approaches star status by the end of the season and if Savage is on the all-rookie team.