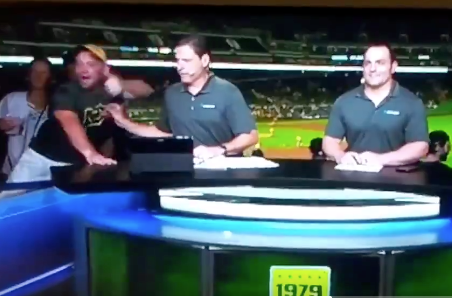 Fans have been known to do stupid things in an event to get on television, and that’s what happened after a recent game between the Pirates and Phillies.

The Pirates were shooting their routine postgame show, giving a live report to sum up the game, and that’s when a fan stepped into the shot and started looking like an idiot — right next to show co-host Rob King. It didn’t take King long to put the fan in his place — check out how he shoved him out of the way with a solid stiff-arm, in the video clip below.

It's 10:30 PM on the hottest day of the summer and Rob King is having none of it. pic.twitter.com/UNc7iBdo2L

That fan clearly deserved it for acting like a moron.