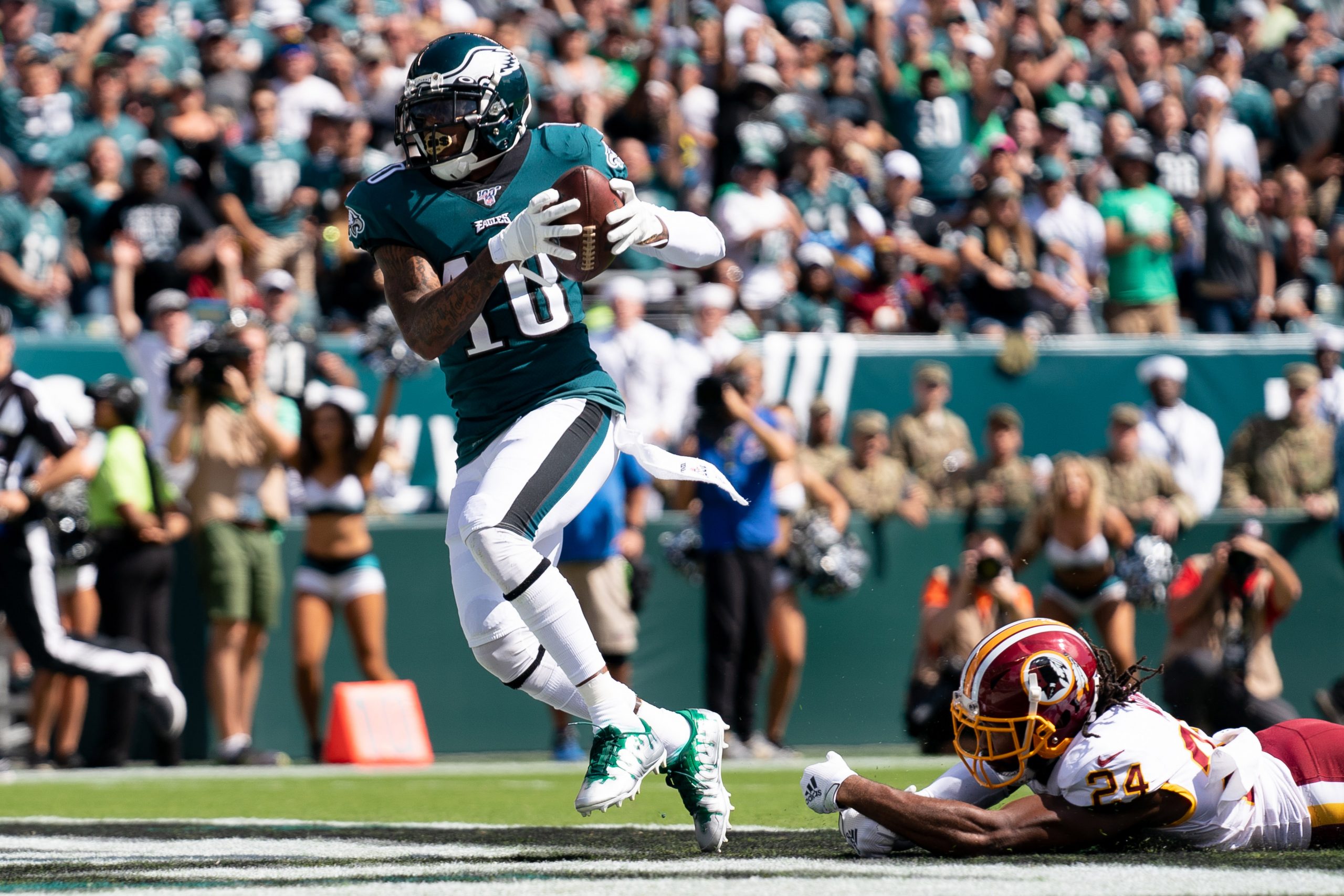 That fan is EYE, but I represent the feelings of at least half of the current Eagles fan base… and I know by cognitive diffusion that DJax is appreciated by nearly every Eagles fan who picked up on the sport by at least their middle school years in 2008.

This scrawny kid from California with a Bowery Boys attitude changed the way we looked at wide receiver profiles.

No longer the rules of gentleman-like deftness of contact and conflict— nay, I defy your physical superiority by counter-jamming your coverage in ways you have not yet imagined— and then I shall find the pass thrown our way in the most scientific way, as if your own flight instruments have failed. And then I shall shift into roadrunner gear and generously feed you the pellets flying off my cleats…

DeSean was lean and mean and smart and stupid all at the same time.  That’s why we loved him.  He was like Waldo on “Family Matters”.  He had a gift.

This column was born in DeSean’s rookie year. Now without a Comments Section the column fizzles along with DeSean’s career with the Eagles.  Both of us are hanging on.  At least DeSean could still hook up with another NFL team if he wants to sweat the training and reach for an encore…. But at this point, if I were DeSean, I’d count my blessings and my previous concussions and move on to something less confrontational.

“One of the greatest Eagles draft picks – the 49th pick in the 2008 NFL Draft – Jackson was released Friday prior to the start of the new league year on March 17. Jackson earned three Pro Bowls and an All-Pro nod in his first six Eagles seasons. He was released following the 2013 season and then rejoined Philadelphia after spending three seasons in Washington and two in Tampa Bay, a heralded reunion prior to the 2019 season.

“It started well enough, as Jackson caught a pair of touchdown passes of 51 and 53 yards from quarterback Carson Wentz in the ’19 opening-day win over Washington, part of an eight-catch, 154-yard afternoon at Lincoln Financial Field. Unfortunately, injuries sidelined him for the majority of the 2019 and 2020 seasons, but his final hurrah was an 81-yard catch-and-run touchdown in a December 27 loss at Dallas. Jackson somersaulted into the end zone in what would be the final of many game-breaking highlights in an Eagles uniform for No. 10.

“[His final two Eagles seasons] shouldn’t take away from what Jackson brought to the table in his first six seasons as an Eagle. An electrifying talent with natural ball-catching abilities, breathtaking speed, and the skills to track a deep pass like few receivers in the game, Jackson was an integral part of the Eagles’ offense from the jump. He caught 62 passes for 910 yards and a pair of scores as a rookie, adding a punt return for a touchdown in that first season. In 2009, Jackson made the first of his three Pro Bowls as an Eagle, catching 62 passes for 1,156 yards and nine touchdowns, and adding another pair of scores on punt returns, averaging a whopping 15.2 yards per punt return. He scored at least one touchdown in five straight games, the second-longest streak in franchise history in that category.

“Jackson’s 65-yard punt return on the final play of the game to beat the Giants in 2010 was, of course, one of the greatest plays in the history of the franchise – the play was the first in NFL history to end with a punt return for a winning touchdown and it was awarded an ESPY for Best Game of the Year – and it demonstrated his flair for the dramatic and the danger Jackson posed every time he had the ball in his hands.

His 376 receptions as an Eagle rank sixth in franchise history, and he’s third in the record books with 6,512 receiving yards, tied for fourth with an average of 17.2 yards per reception, and Jackson ranks ninth in team history with 35 receiving touchdowns. Jackson had eight games in his Eagles career with at least 150 receiving yards, a team record. Jackson’s four punt returns for touchdowns are tied with Darren Sproles in the Eagles’ record books.

Born: December 1, 1986 (age 34 years), Los Angeles, CA
40 yard dash time: 4.35 seconds
Height: 5′ 10″
Education: Long Beach Polytechnic High School, University of California, Berkeley
Draft year: 2008 nfl.com
Net worth:  $14 million
The Eagles had to move on from Jackson, who’s been hurt for most of the two years since he came back to Philly, and they had to move on from Alshon Jeffery, whose healthy production has declined steadily since he got here. Cutting ties with the two veterans wasn’t just necessary from a football standpoint, they together save the Eagles over $15 million in cap space.
Don’t write off DJax completely, he will get looks from teams like the Raiders and the Browns if he is remotely interested in playing for the league minimum salary with incentives.  But for his physical and mental well-being, EYE wish him a speedy retirement.
Topics
Eagles