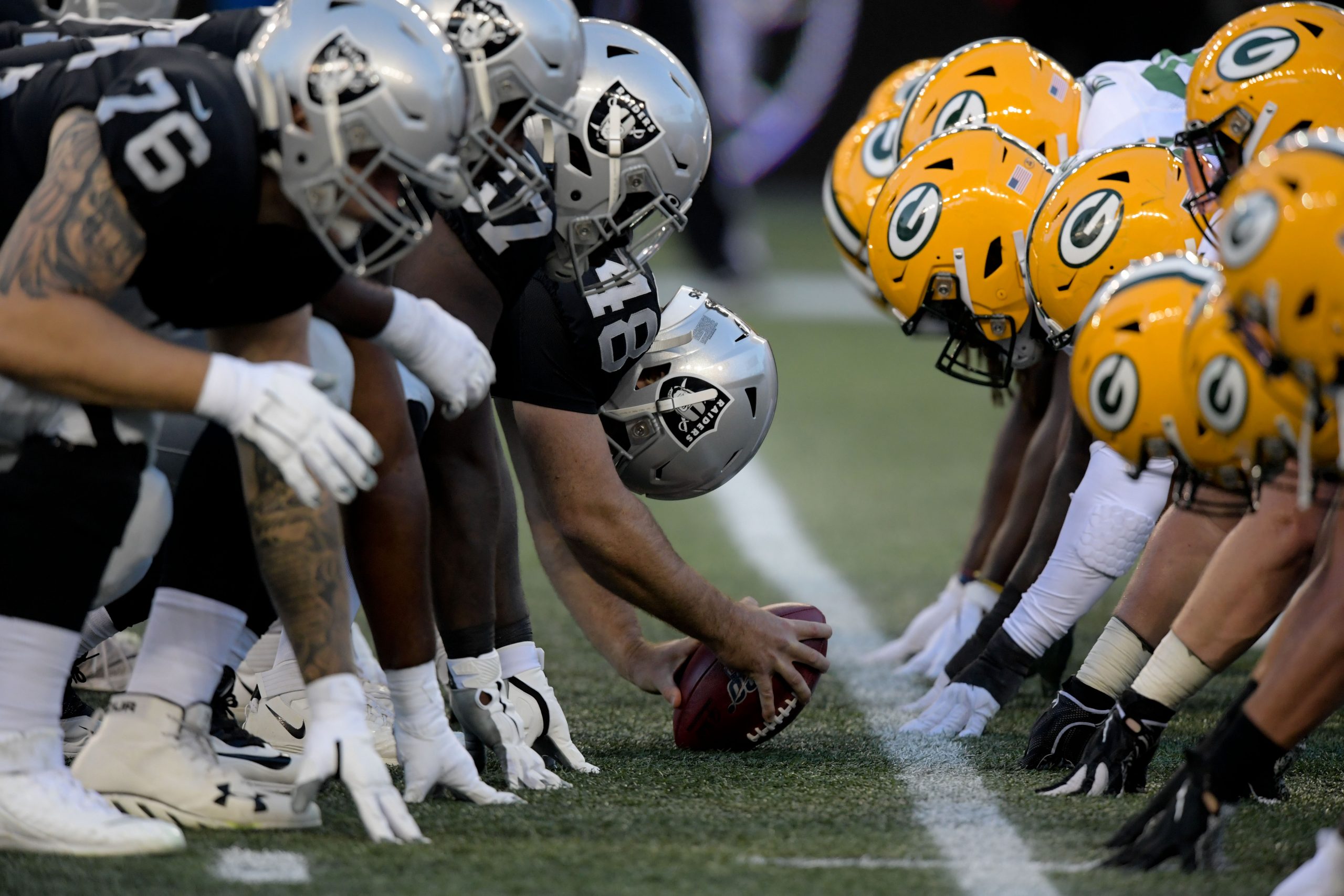 The Green Bay Packers host the Oakland Raiders Sunday afternoon at Lambeau Field. The Packers enter the game in first place in the NFC North with a 5-1-0 record while the Raiders are 3-2-0 coming off their bye week. The Packers edged the Lions on Monday night 23-22 while the Raiders won their last game in London two weeks ago, defeating the Chicago Bears 24-21.

Here is a look at the six key factors that will determine who will win Sunday’s game in Green Bay:

The Raiders offense revolves around rookie running back Josh Jacobs who leads the team with 430 yards in five games. He is averaging 4.9-yards per carry and has four rushing touchdowns.

Expect Jon Gruden to try to grind things out against a Green Bay defense that has often struggled to stop the run. The Packers have done a better job over the last two weeks, taking Ezekiel Elliott and Kerryon Johnson out of the last two contests.

Jacobs is only 5’10” but he is 220 pounds and is tough to bring down between the tackles. Blake Martinez, Kenny Clark, Montravius Adams and Dean Lowry must do a good job of controlling the line of scrimmage and not allowing Jacobs to set the Raiders up in second and third and short situations.

2. Spread the Ball Around in the Passing Game

The Packers will be without Davante Adams again for the third straight game on Sunday. Geronimo Allison is listed as doubtful while Marquez Valdes-Scantling is questionable. That leaves the Packers very shorthanded at receiver.

As a result, Aaron Rodgers will have to spread the ball around and find the open man on any given play. Expect running backs Aaron Jones and Jamaal Williams to have a larger than normal role as receivers. With linebacker Vonteze Burfict lost for the season due to a suspension, the Packers should be able to get very favorable matchups for their running backs in the passing game.

The tight ends will also be utilized more often if they can get open. Robert Tonyan should be able to play this week and Marcedes Lewis has played a bigger role as a receiver in recent weeks as well.

It will be interesting to see how Allen Lazard does after a strong finish last week against Detroit. Newly signed WR Ryan Grant may also be active and see some action depending on how quickly he can learn the playbook.

The Raiders run defense is a solid group and they rank 10th in the league with 92 rushing yards allowed per game.

The Packers need to be able to move the ball efficiently on the ground with their receiving corps missing so many key players.

The Raiders will be without DE Arden Key and the Pack needs to take advantage of that matchup.

The middle of the Green Bay offensive line led by Corey Linsley and Elgton Jenkins, will need to do a good job off opening holes for Jones and Williams to cut through. DT Maurice Hurst will be a challenge to move off the line on Sunday.

4. Get Pressure on Derek Carr

The Raiders tend to move the ball methodically down the field as they lack breakaway receivers to get deep consistently. Derek Carr is averaging only 6.9 yards per attempt despite having completed 73.3 percent of his passes this season.

The duo of Za’Darius Smith and Preston Smith need to put some pressure on Carr and force him to break the rhythm of his short and quick release passes to his receivers. Preston Smith leads the Packers with seven sacks in six games while Za’Darius is close behind with six.

Raiders right tackle Trent Brown is listed as doubtful for the game with a calf injury while right guard Gabe Jackson is nursing a knee injury and is listed as questionable. Expect defensive coordinator Mike Pettine to try to use his blitz packages to take advantage of the matchups on the right side of the line throughout the game.

The Raiders will be without WR Tyrell Williams who is dealing with a foot injury and has been ruled out. Their top target by far is TE Darren Waller who just signed a multi-year contract extension this week.

Waller has 37 catches on the season, more than double the next nearest Oakland player. Ex-Packers WR/RS Trevor Davis and ex-Bills WR Zay Jones will probably see plenty of action for Oakland.

The Packers have an edge as their cornerbacks, led by Jaire Alexander, Kevin King and Tramon Williams, are a strength of this team while the Raiders are struggling with a lack of receiving depth.

Green Bay will be without Darnell Savage for the second straight week but will rely on Adrian Amos and Will Redmond to slow down Waller and the rest of the Raiders TEs and RBs.

If Waller is kept in check, the Raiders will have difficulty throwing the football down the field. Pettine wants opposing offenses to have to sustain long drives and the Raiders offense tends to play that way anyway. That allows the Packers to force the opposition into key mistakes and to come up with sacks and turnovers.

The Raiders have a pair of dangerous return specialists in Dwayne Harris and Trevor Davis. The Packers coverage units have struggled at times this season although they are improved over the past few campaigns.

The Packers cannot allow the Raiders to make game-changing plays on special teams. A long return or costly turnover can be very costly to the Packers. JK Scott and Mason Crosby will have to have solid games punting and kicking off and the coverage teams cannot allow any splash plays on returns.

Return specialist Darrius Shepherd fumbled last week and lost his confidence after the turnover. He will need to bounce back to keep his spot on the roster secure.

The Packers have won a lot of close games this year and this should be another one. The Raiders are clearly an improved team over last season, and they are rested off their bye week while the Packers had a short week after playing on Monday night.

If the Packers can win the turnover battle and slow down Jacobs enough, they should have a big advantage on Sunday. It will not be easy for Carr to beat the Green Bay secondary consistently to make big plays.

Look for a low scoring game but the Packers have the edge at home.