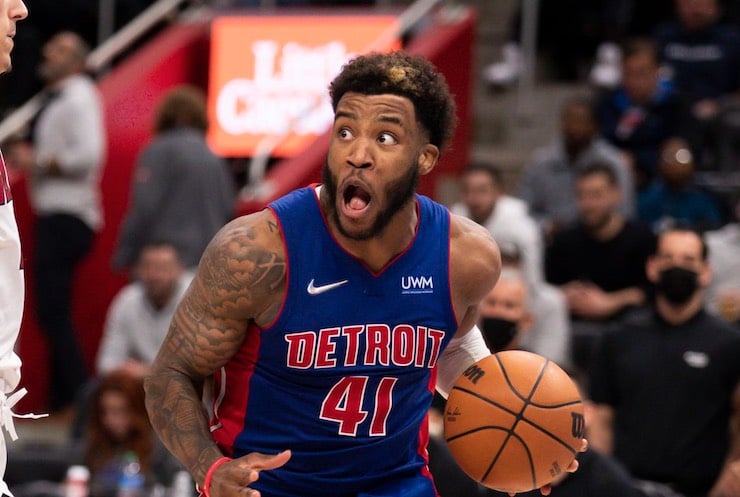 For a long time, Saddiq Bey has been off the table as far as trade rumors go, but after a tough start to the season, the Detroit Pistons are apparently willing to listen to offers.

According to Jake Fischer, the Pistons have taken early calls on Bey but are intent on further evaluating the 23-year old before they truly entertain his trade market.

A former first-round pick, Bey’s productivity on the court has been disappointing, especially on the defensive end of the floor. With Bey suffering from a sprained right ankle, the Pistons have him sidelined during their current West Coast road trip.

Saddiq Bey Trade on the Table for Detroit Pistons

The Pistons are rebuilding and have a great core of talented young players with a lot of potential. However, Bey’s development has been a little disappointing this year.

Known as a gifted scorer, Bey started all 82 games last season for the Pistons, but he’s taken a step back so far this year. Bey is averaging 14.7 points, 4.8 rebounds and 1.6 assists per game but is shooting just 29% from beyond the arc so far this year. His numbers are down across the board and seemed to be trending in the wrong direction even prior to getting hurt..

The main problem around Bey is his consistency. In his last five games, he’s only averaged nine points and shooting 31.4 percent from the field.

The 23-year old has still shown flashes of brilliance so far this season, reaching 20 points in five of his 17 games. In an October win over the Golden State Warriors, Bey scored 28 points.

The young guard hasn’t found his rhythm yet this year but the Pistons are apparently interested to hear what Bey is worth on the trade market. General manager Troy Weaver has always been very open to hearing trade proposals in the past and it appears he’s running out of patience with the former Villanova product.

The Pistons are in the process of rebuilding and will need to decide whether or not Bey will be a part of their core going forward.

With rumors swirling, there could be a few potential trade partners for Bey.

While the Pistons’ forward is no longer with the team on its West Coast road trip, the LA Lakers are apparently one of the team’s rumored to be interested in Bey’s services.