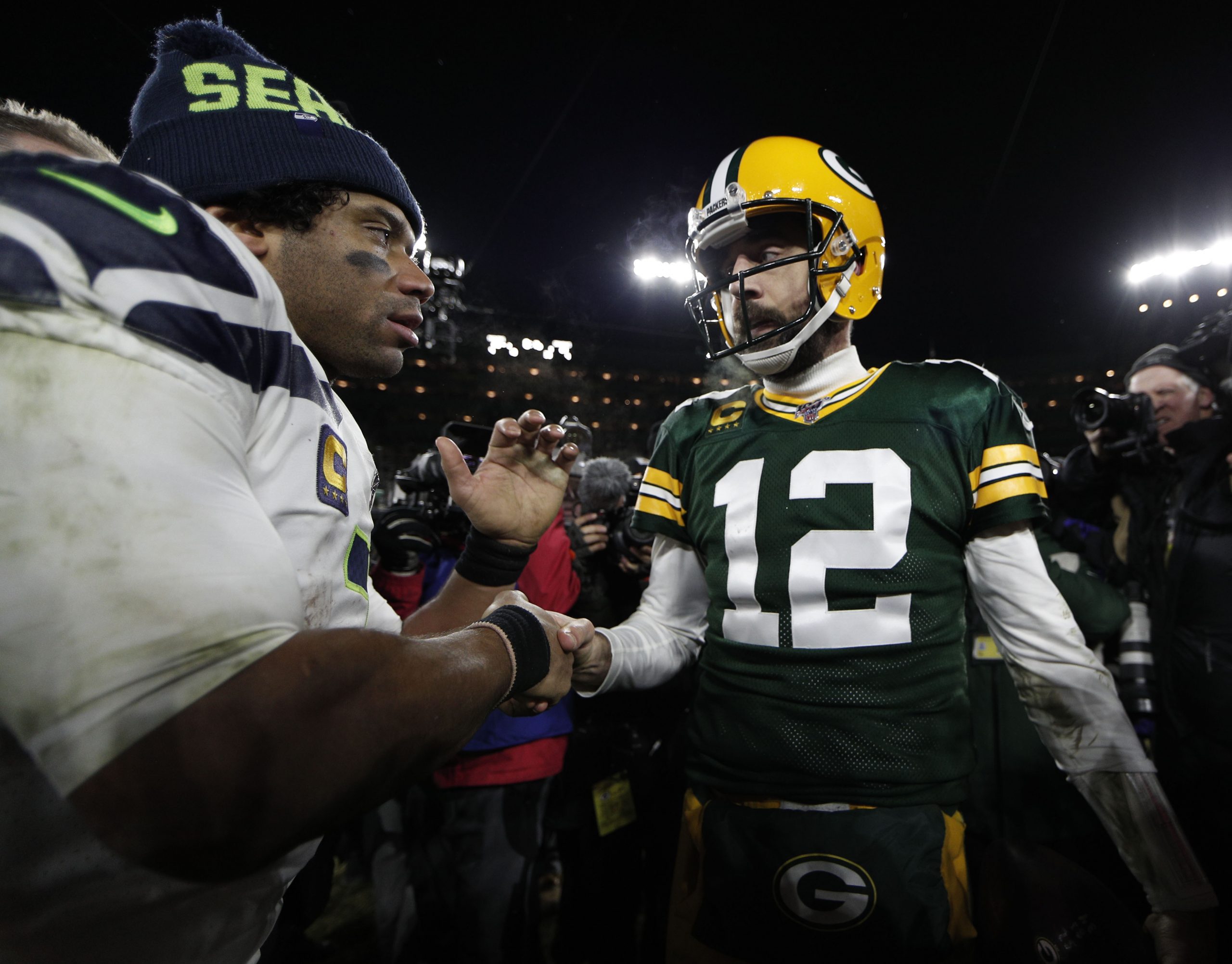 The Green Bay Packers face the Los Angeles Rams on Saturday at Lambeau Field in the NFC Divisional Playoffs. This will be the eighth time the Packers have hosted a division playoff game and thus far, playing at home and in the Wisconsin winter in December and January has been a big help for the Packers.

Thus far, the Pack is 6-1 in division playoff games at home dating back to 1967. Here is a look at the previous games. Only home games are included here and the games are listed in chronological order. Weather conditions for each game are listed when available.

The Packers started their postseason drive for a third straight NFL title with a 28-7 win over the Rams at Milwaukee County Stadium. The Rams entered the game with an 11-1-2 record but the Packers 9-4-1 Packers had more experience and were not intimidated by the Rams “Fearsome Foursome” defensive line. 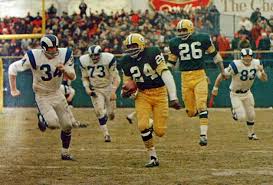 After falling behind 7-0, the Packers scored 28 unanswered points with rookie running back Travis Williams running for 88 yards on 18 carries and scoring two touchdowns.

The Green Bay defense stepped up and shut down the high powered Rams offense, holding them to just 217 total yards and sacking quarterback Roman Gabriel five times including 3.5 by Hall of Fame defensive tackle Henry Jordan.

Gabriel was unable to pass well in the cold, completing just 11 of 31 passes for 186 yards and one touchdown. He also had one pass picked off by Tom Brown.

“We rose to the occasion,” Vince Lombardi said. “A lot of people said the Packers were dead, but we still have a great nucleus.”

The victory sent the Packers back to the NFL Championship Game against the Dallas Cowboys, a game that would be forever remembered as “The Ice Bowl.”

The Packers hosted their first home divisional playoff game in 29 years when they faced the 49ers in the rain and mud at Lambeau Field.

The weather conditions limited both offenses as Brett Favre threw only 15 passes, completing 11 of them for 79 yards and a touchdown. 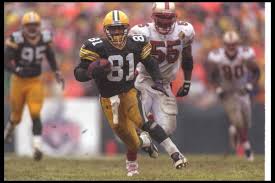 Desmond Howard opened the scoring with a 71-yard punt return for a touchdown that gave the Packers an early lead. Edgar Bennett ran for 80 yards and two touchdowns while the Packers defense held the 49ers offense to 196 yards and forced five turnovers including three interceptions of 49ers quarterback Elvis Grbac.

The win sent the Packers to the NFC Championship Game for the second straight year and they hosted the game for the first time since The Ice Bowl.

The Packers managed to hold off the Bucs for the third time in 1997, beating Tampa Bay in a tough, defensive slog, 21-7. Dorsey Levens ran for 112 yards and a touchdown and caught four passes for 29 more yards to pace the Packers offense while Brett Favre overcame the cold to pass for 190 yards and a touchdown. 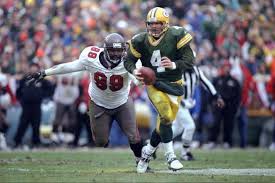 The Green Bay defense made big plays including sacks by LeRoy Butler and Keith McKenzie and interceptions by Tyrone Williams and Mike Prior.

Favre’s touchdown pass went to tight end Mark Chmura in the first quarter and it gave the Packers a 7-0 lead.

The Packers advanced to the NFC Championship Game in San Francisco against 49ers where they won to get to their second straight Super Bowl.

The snow fell hard during the Packers playoff game against the Seahawks but that didn’t stop the Packers from a record-setting victory.

Ryan Grant fumbled on each of the Packers first two drives and the Seahawks took a quick 14-0 lead when the game was just 4:01 old. But Grant didn’t let his slow start stop him and he finished the game with a Packers postseason record 201 yards rushing on 27 carries and ran for three touchdowns. 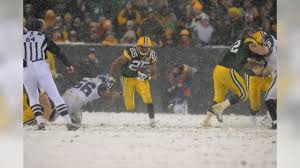 Brett Favre also had a strong game despite the weather, completing 18-of-23 passes for 173 yards and three touchdowns without throwing an interception. Two of those scoring tosses went to wide receiver Greg Jennings who led all Green Bay receivers with six catches for 71 yards.

Favre had now thrown at least one touchdown pass in 17 straight playoff games, an NFL record. This would also be Favre’s final victory as a Packer.

The Packers 15-1 season came to a premature and disappointing end when the Giants upset the Packers 37-20 at Lambeau Field.

The turning point came on the final play of the first half with the Giants leading 13-10. Eli Manning threw a Hail Mary pass to Hakeem Nicks from 37 yards out to give the Giants a 10-point halftime lead and to deflate the Packers. 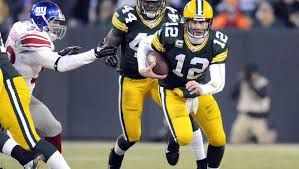 Aaron Rodgers threw for 264 yards and two touchdowns but he also led the team in rushing yards with 66. Manning finished with 330 passing yards for the Giants and threw for three touchdowns.

“We play to win championships,” Rodgers told Newsday after the game. “You win a championship, have a kind of the top of the mountain, and you forget how bad this feeling is. After the 2009 season when we lost to Arizona, it stinks. This team, this organization, this fan base, expects championships. We had a championship-caliber regular season and didn’t play well.” 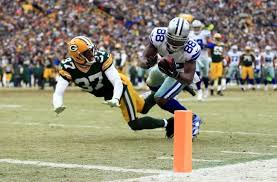 The Cowboys tried to engineer a late comeback but their drive fell short when officials ruled that Dez Bryant did not complete a long catch that would have put the ball inside the Packers five-yard line with a little more than four minutes left in the game.

Rodgers finished the game with 316 yards passing and three touchdowns while Eddie Lacy ran for 101 yards. Both Randall Cobb (eight catches for 116 yards) and Adams (seven catches for 117 yards) went over 100 yards receiving for the Packers.

The victory sent the Packers to the NFC Championship Game in Seattle.

The Packers built an early 21-3 halftime lead and then held on to win Matt LaFleur’s first playoff game 28-23 over the Seahawks.

The Packers defense sacked Russell Wilson five times including two each by Preston and Za’Darius Smith.

Green Bay clinched the win late when tight end Jimmy Graham picked up a key first down to allow the Packers to run out the clock and preserve the victory.

The win earned the Packers their first trip to the NFC Championship Game since 2016.