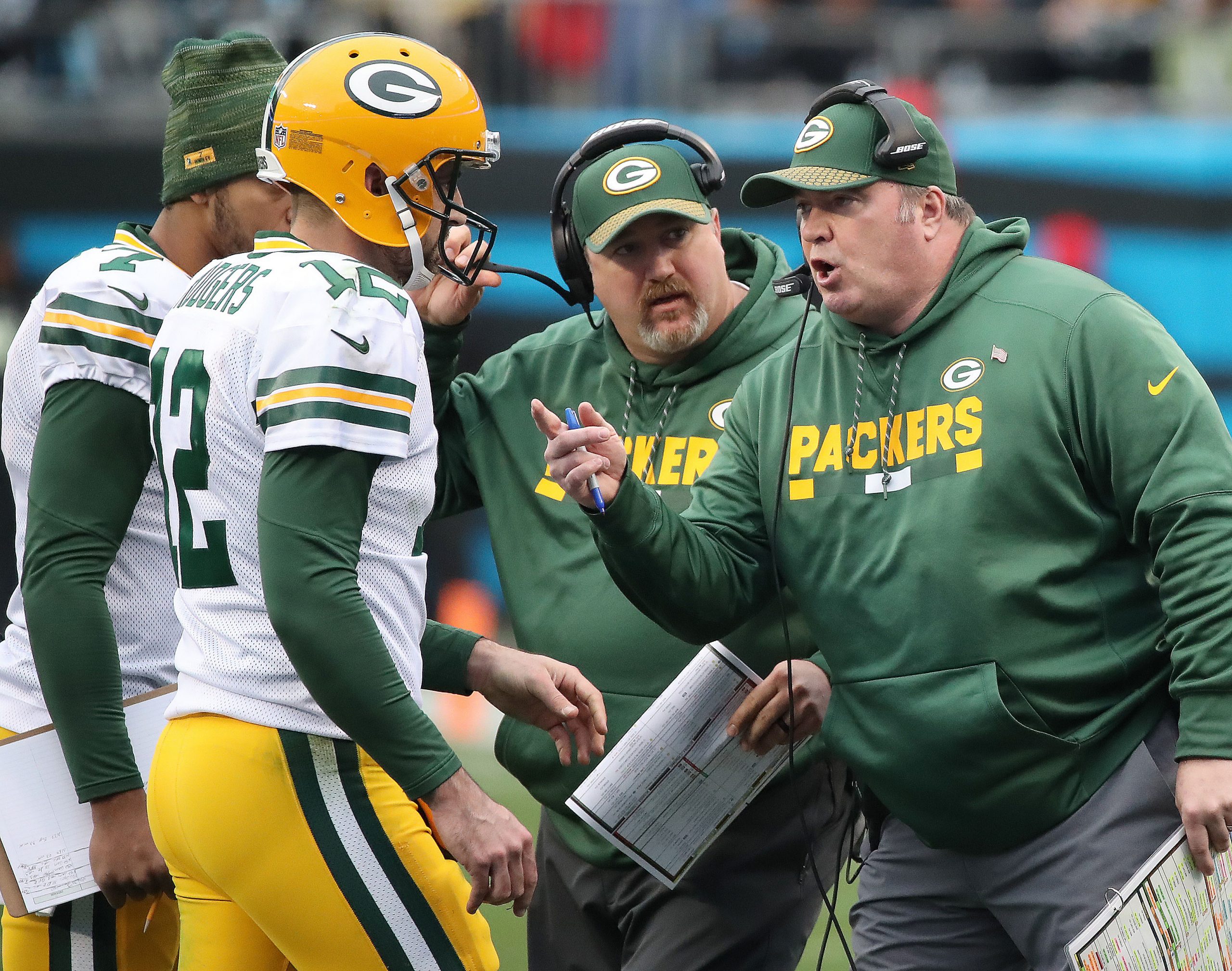 There was a feeling of inevitability when the Green Bay Packers dismissed head coach Mike McCarthy after Sunday’s demoralizing loss to the Arizona Cardinals. The only question for weeks has not been if McCarthy would be fired but when. The Packers almost did the coach a favor by sparing him four more weeks of speculation in the press and tension in the locker room.

But why was McCarthy fired? The simple reason is the team’s 4-7-1 record when they were expected to be a playoff team entering the 2018 campaign. But there are many reasons why Mike McCarthy had to be let go. Here is a look at the top eight reasons McCarthy’s tenure in Green Bay ended on Sunday after nearly 13 seasons.

The most immediate cause of any coach’s firing is a failure to win enough football games. Over the last two seasons under McCarthy, the Packers are 11-16-1. The 7-9 finish in 2017 was largely due to Aaron Rodgers’ injury. The Pack was 4-1 when Rodgers suffered a broken collarbone but went 3-8 the rest of the way.

McCarthy failed to get much accomplished with Brett Hundley. Hundley wasn’t ready to start in the NFL and the offense didn’t make proper adjustments with Hundley to help make him successful. Both factors can be at least partially blamed on McCarthy. As coach, it was his job to prepare his backup quarterback to play when called upon. Once he was in the lineup, McCarthy had to make adjustments to maximize the strengths and minimize the weaknesses of his inexperienced quarterback.

Rodgers’ absence earned McCarthy a Mulligan for last year, but the team’s failure to play better and more consistently in 2018 with Rodgers in the lineup sealed his fate.

Injuries hurt every NFL team. “Next man up” is a slogan that has become a cliché around the league. But the Packers got hit by injuries in the areas where their depth was poorest and that made things tougher for the team.

We already discussed Rodgers injury last season and of course the Packers franchise quarterback suffered a knee injury on opening day against the Bears that compromised his mobility, reduced his accuracy and perhaps most importantly, limited his practice time with his new tight ends and three rookie receivers.

Injuries then hit the Pack at receiver, so Marquez Valdes-Scantling, J’Mon Moore and Equanimeous St. Brown suddenly had to go from being the fourth, fifth and sixth receivers to the second and third spots. The injuries to Randall Cobb and Geronimo Allison forced the rookie receivers to contribute immediately and without adequate practice time with their quarterback. The result was inconsistent performances at wide receiver. Without knowing if his receivers would be open or even in the right place especially when he scrambled to extend plays, Rodgers’ frustration level grew rapidly.

Injuries also struck the Pack along the offensive and defensive lines and in the secondary. That made the trade of Ha Ha Clinton-Dix and the release of Jermaine Whitehead more painful and challenged young players to make major contributions before they were ready.

3. The Offense Failed to Grow and Evolve Enough with the Times

The best offenses in the NFL today are scheming their receivers open by making the opposing defenses defend all of the field. Teams like the Chiefs, Rams and Eagles run pick plays, jet sweeps and many other innovations. McCarthy’s offensive plan hasn’t incorporated enough of these changes and hasn’t evolved enough in recent years. The result: defenses learned how to slow it down except when Rodgers was playing his A game.

In 2011, McCarthy’s receiving corps was elite and didn’t need much help getting open. The WRs included Jordy Nelson, Greg Jennings, James Jones, Donald Driver and Randall Cobb while Jermichael Finley gave the Pack a tight end who could stretch the field and created matchup problems for defenders just based on his size, speed and ability.

The 2018 team doesn’t have that kind of depth or ability at the receiver position, so adjustments had to be made. But these changes weren’t used enough or perhaps not implemented enough by the quarterback, but we’ll get to that issue later.

Former GM Ted Thompson built the Packers primarily through the draft, choosing to forsake high-priced free agents for home-grown talent. This worked well for a while, but success meant the Packers were picking late in the draft which made it more difficult to consistently select quality players who could step in and contribute.

After a strong start that built the foundation of an elite team, Thompson had some weak drafts. Currently, there is just one player on the roster from the 2013 draft (David Bakhtiari), two players from 2014 (Davante Adams and Corey Linsley) and one player left from 2015 (Jake Ryan, who spent the entire season on injured reserve).

Players from those drafts would be in the prime of their careers right now, but they aren’t on the roster. As a result, the talent level, especially the depth, just isn’t there.

Simply put, if you compare a head coach to a chef, your results are best when you get him fresh and high-quality ingredients. There weren’t enough of them in recent years as a result of these three bad drafts.

5. McCarthy and Aaron Rodgers Were Unable to Work Out Their Differences

Both McCarthy and Rodgers have been described as “alpha males.” When two alphas get together, there is bound to be a test of wills and some tension.

But for years, both coach and quarterback were able to find a way to rise above these tensions, probably because the team was winning, and Rodgers’ stats were so good. As they say, winning is a great deodorant.

Rodgers was clear about this. “Like any relationship we’ve had amazing times and times when we butt heads, Rodgers admitted. “We accomplished a lot together. Like I said, it’s tough. You spend that much time together, so many years, and you have a close working relationship and a close friendship off the field.”

When Rodgers lost confidence in the play calling, he often changed plays at the line of scrimmage. That made it harder for McCarthy to get into any kind of rhythm with his game plans. Both Rodgers and McCarthy grew more and more frustrated.

In the past, McCarthy and Rodgers found a way to work through their tensions and worked together to find a way to be successful. That didn’t happen enough this year and the result was inconsistency on offense and frustration in the locker room.

At the end of the day, McCarthy had to realize this: once Rodgers signed a record-breaking contract that made him the highest paid player in NFL history, if it came down to a choice between McCarthy and Rodgers, the Packers would be keeping their quarterback, not their coach.

6. McCarthy Then Lost the Locker Room

Whether it was because Rodgers changed so many plays or the tension between coach and quarterback, McCarthy started to lose the locker room. The players weren’t responding to him the way they had in the past.

The release of Ty Montgomery was a telling incident. Montgomery disregarded his coach’s instructions to down the kickoff and tried to make a big play. The result was a turnover that cost the team a chance to pull off a big upset win that could have provided the galvanizing moment the team needed so badly.

Then, a Packers player anonymously questioned Montgomery’s dedication to the team and called him out for being selfish.

Clearly, this was not a harmonious locker room. Add that to the tensions between Rodgers and McCarthy and there are clearly some issues. GM Brian Gutekunst tried to improve the atmosphere by trading Montgomery and Clinton-Dix and releasing Whitehead, but it may have been too little, too late.

Again, when you’re winning, a lot of these problems can be overlooked and smoothed over. When the team is struggling, however, issues like these usually fester.

7. McCarthy Was Too Slow to Fire Some Assistants

Capers was clearly struggling the last few years in Green Bay. His defense was getting too predictable. From 2013 through 2017, the Packers “D” never ranked higher than 15th in the league in total yards and that included finishes of 22, 22 and 25. Whether it was out of familiarity or loyalty or whatever, McCarthy stuck with Capers until after the 2017 season.

Zook is in his fifth season with the Packers as special teams coordinator. Unfortunately, special teams have been a problem for the team year after year. Costly penalties have wiped out big returns, the coverage teams have been inconsistent and key turnovers and mistakes have cost the team wins in both the regular season and the playoffs.

Capers and Zook should not have stayed employed with the Packers this long. McCarthy’s failure to hold his assistant coach’s accountable made it harder to improve the team and for him to hold his players accountable.

The cliché is all coaches have an expiration date. Even the best leaders reach a point where their message gets stale in the locker room and players start to tune them out.

Mike McCarthy coached the Packers for nearly 13 full seasons. He was a very successful coach, reaching the playoffs nine times overall and for eight consecutive seasons. He has more wins (125) than any coach in Packers history except for Curly Lambeau.

But look at how the Packers played against the Cardinals on Sunday. In a must-win game in the snow at home, the team showed no emotion, no desperation, no sense of urgency.

There is no doubt McCarthy is still a very good NFL coach. In the long run, the Packers fans and organization owe Mike McCarthy a debt of gratitude for his successful run as coach of the team. He loved the job, the organization and handled his duties with class. The McCarthy Era will be remembered fondly in Titletown, but his time in Green Bay had expired and the Packers had no choice but to hit the reset button.