Early Signs of Trouble? 5 Injury Concerns for Teams to Worry About

Early Signs of Trouble? 5 Injury Concerns for Teams to Worry About 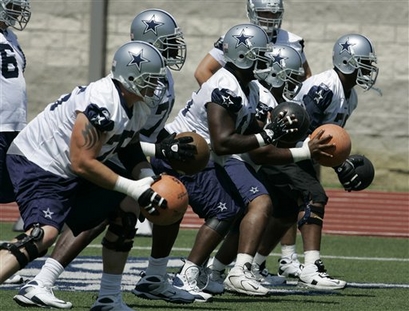 Last season’s New York Giants got a little banged up in the preseason only to get decimated after week 6 by injuries and never recover.

Here’s a couple warning signs that teams should be concerned about entering into the regular season.

Brett Favre’s Ankle – I know everyone’s just so excited to hear he finally made his decision and that he’s not going to play this ping-pong decision game anymore (at least this season). While he did make his decision and everything seems all good in Minnesota, did anyone happen to hear Brett say that his ankle still isn’t completely healed? The doctors told him not to expect any miracles like his bicep injury. He worked out and practiced today with the camp, but of course there’s no contact in camp. Will his ankle actually hold all season? Remember, week 1, they go right back to New Orleans to the same team that beat that ankle up. What Favre did last season could be described as nothing really short of a miracle. But 40 year old miracles only last for so long.

Dallas’s aging Offensive Linemen – Everyone knew that the Cowboys’ oldest spot was their offensive line. In 2008, it proved to be their Achilles’ heel and it was badly exploited, especially at the season’s end in that whomping by Philadelphia 44-6. In 2009, the line stayed mostly healthy all season, with only Marc Columbo going down but capable backup Doug Free stepping in and not missing a beat. Now with Flozell Adams gone and Free taking the blindside spot, injuries to this veteran group can leave Dallas with a real problem. As of right now, both Marc Columbo and Kyle Kosier are out at least until week 1. Their depth behind the starters is so-so. I won’t say they have an all-star backup squad. Recently acquired backup Alex Barron from St Louis hurt is out on injury, leaving them bare behind Free on the LT spot. If Dallas wants to reach that dream of being the first team to host a SuperBowl, they have to get this under control because this can easily make or break their season.

Ben Tate lost for the season – This might not sound like such a big impact, but this will sit with Houston for a good majority of the season. Tate was looked at as someone who was going to be a big part of the run game with feature back Steve Slaton. Now with Tate gone, the RB core in Houston looks a little thin and questionable. When Houston has a decent run game, they take pressure away from Matt Schaub and that’s when he’s at his most dangerous point. Schaub is a great QB, but injuries have plagued him throughout his career. They need to keep the pressure off the QB, and the task just got a lot tougher.

Who isn’t injured in Buffalo? –

Baltimore’s Woes with their DB’s – For a team that’s predicted to represent the AFC in the Superbowl, this team has some real concerns behind their front 7. Domonique Foxworth is gone for the season, Ed Reed is still nursing a bad hip, Lardarius Webb has an injured knee and still isn’t even cleared to practice. The only one who just recently got cleared to play was Fabian Washington, and this will be his first run at contact since injuring his knee. With all these injuries in the backfield, teams are going to test them right from the very beginning to see if they can properly pivot and turn on those knees. Hopefully Baltimore can get healthy in a hurry, because this is going to put a lot of pressure on Joe Flacco and Ray Rice to keep them in the game when they can’t stop someone defensively.

They always say Misery loves Company, and they aren’t lying in that statement. With both Marshawn Lynch and Fred Jackson banged up and questionable to start the season, our friends at ProFootballTalk just announced that standout S Jairus Byrd is done “indefinitely” after having groin surgery again. Byrd was up for Rookie of the Year previously for having 9 interceptions and being the only real shining spot in a very suspect Buffalo secondary. This is an even bigger blow than the RB problems since they drafted C.J. Spiller to give them a real attack in the backfield. With Byrd going down, this is going to be any opposing QB’s dream to attack deep on these guys every other dropback.