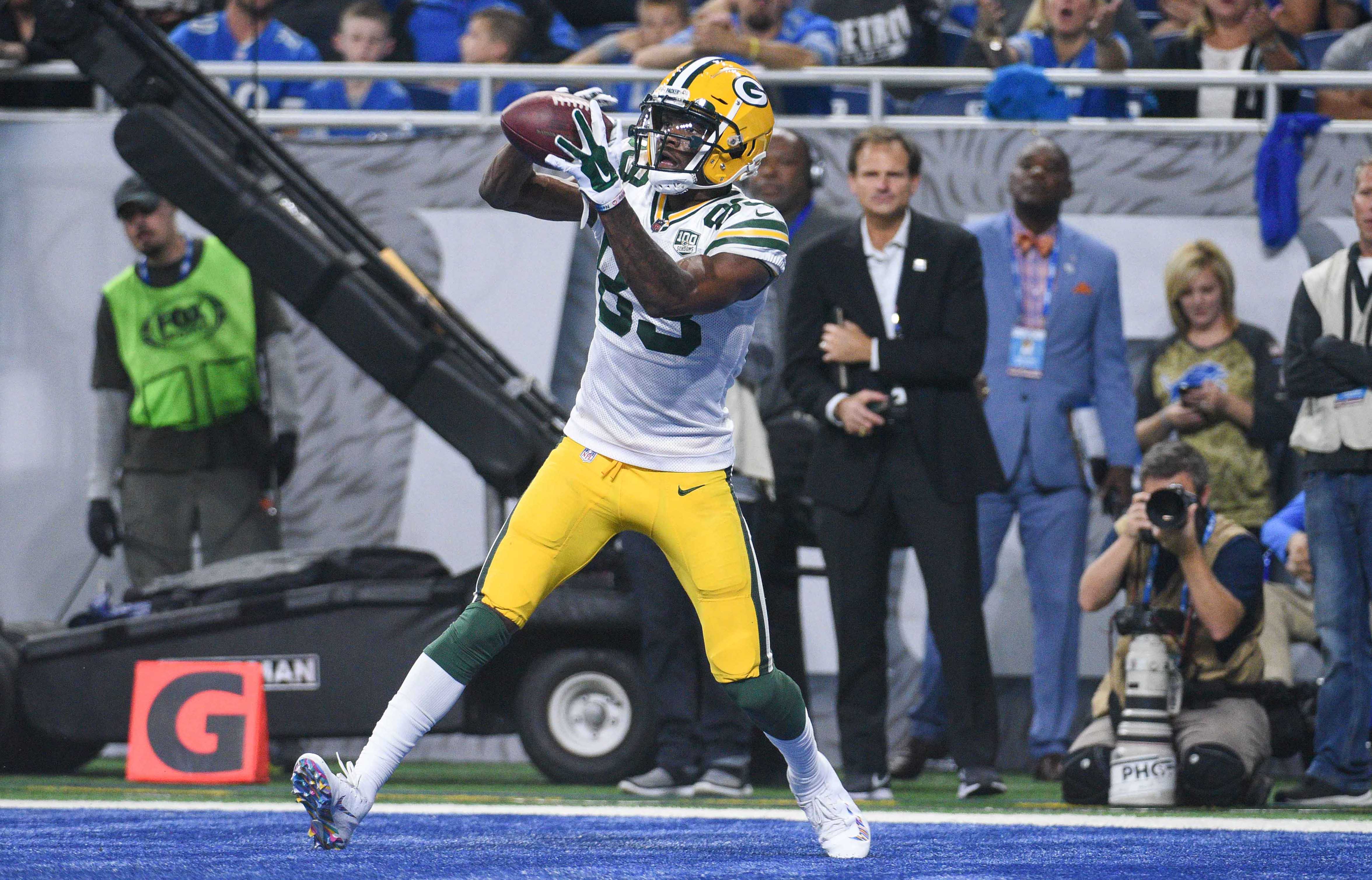 The Green Bay Packers have been very impressed with the play of rookie wide receiver Marquez Valdes-Scantling this season. While he started out the campaign as an unproven rookie, MVS has gradually earned more playing time and the trust of quarterback Aaron Rodgers as the season has progressed. Now, with third receiver Geronimo Allison out for the rest of the regular season, Valdes-Scantling has a chance to make an even greater impact on the Green Bay offense.

Thus far, the fifth-round pick out of South Florida has 17 catches for 358 yards and two touchdowns. Those are good numbers considering the rookie started the season as fourth on the team’s receiving depth chart. His average is a very healthy 21.1-yards per catch and he has gone over the 100-yard mark twice in the team’s last three games.

The Packers drafted three wide receivers on the third day of this year’s draft, J’Mon Moore in the fourth round, Valdes-Scantling in the fifth and then Equanimeous St. Brown in the sixth round. Valdes-Scantling has learned the offense the quickest of the three rookies and has been the biggest contributor by far.

One big reason for that is that MVS has a very strong work ethic. He is determined to continue to improve as a receiver with each passing week. “I’m still learning, still growing,” Valdes-Scantling said after another strong performance. “Every day is a new day to learn something. I’m always going to approach it that way whether I’m a rookie or a 10-year guy. I’m always going to approach it that way. I never want to say I’m done learning or trying to get better.”

Valdes-Scantling is also a smart football player. He understands the offense and realizes that the fact that opposing defenses are going to pay a lot of attention to Davante Adams and Jimmy Graham will only help him get more chances to get open.

“They’re going to draw a lot of double-teams,” Valdes-Scantling said. “You can’t double everybody. You’ve got good players around and it opens up other players, and I just took advantage of my opportunities.”

Those opportunities include plenty of big plays. The 6’4” Florida native has the size and speed necessary to make long receptions and he’s already caught four passes of 30 yards or more on the season.

In addition to his flat-out speed, Valdes-Scantling has the skill set to make big plays. “He’s good at tracking [the ball],” Adams explained. “And obviously Aaron’s placement is going to be where it needs to be.”

Valdes-Scantling knows that if he is going to be a bigger part of this offense going forward, gaining the confidence of his quarterback is vital.

“It’s all about earning trust from everybody in the building. It’s just about having the people around you trust you,” Valdes-Scantling said. “Being in the right place at the right time so you have the opportunity to make the play. That’s what’s going to make me successful in this league, having the trust of the quarterback.”

It’s becoming clear that MVS is earning that trust. Rodgers how Valdes-Scantling made back-to-back long catches against the Patriots after dropping a ball earlier in the game.

“He made two great catches back-to-back plays,” Rogers told reporters after the loss to New England. “An adjustment on the third-and-1 to take it down the sidelines and when the ball left my hand, I thought it was not a great throw and he came down with it, both feet in-bounds, fantastic, moving to the number two spot on the left side. And he made a fingertip catch in tight coverage the next play. So those are plays that you love, and you know, he dropped one early. But I told him at halftime, ‘I’m going to come back to you.’ And sure enough, on that first drive, they brought empty pressure, we picked it up and hit him for a big play that kind of got us back in the game, went on to score a touchdown.”

Valdes-Scantling will have a chance to put up even bigger numbers in the second half of the season since Allison is out of the lineup and he is getting more and more comfortable in the offense. But individual statistics are not as important to the rookie.

Valdes-Scantling has the potential to do a lot in this league. With his work ethic and football intelligence, he has a chance to do that very soon. The Green Bay Packers hope this is just the beginning of a long and productive career for MVS.