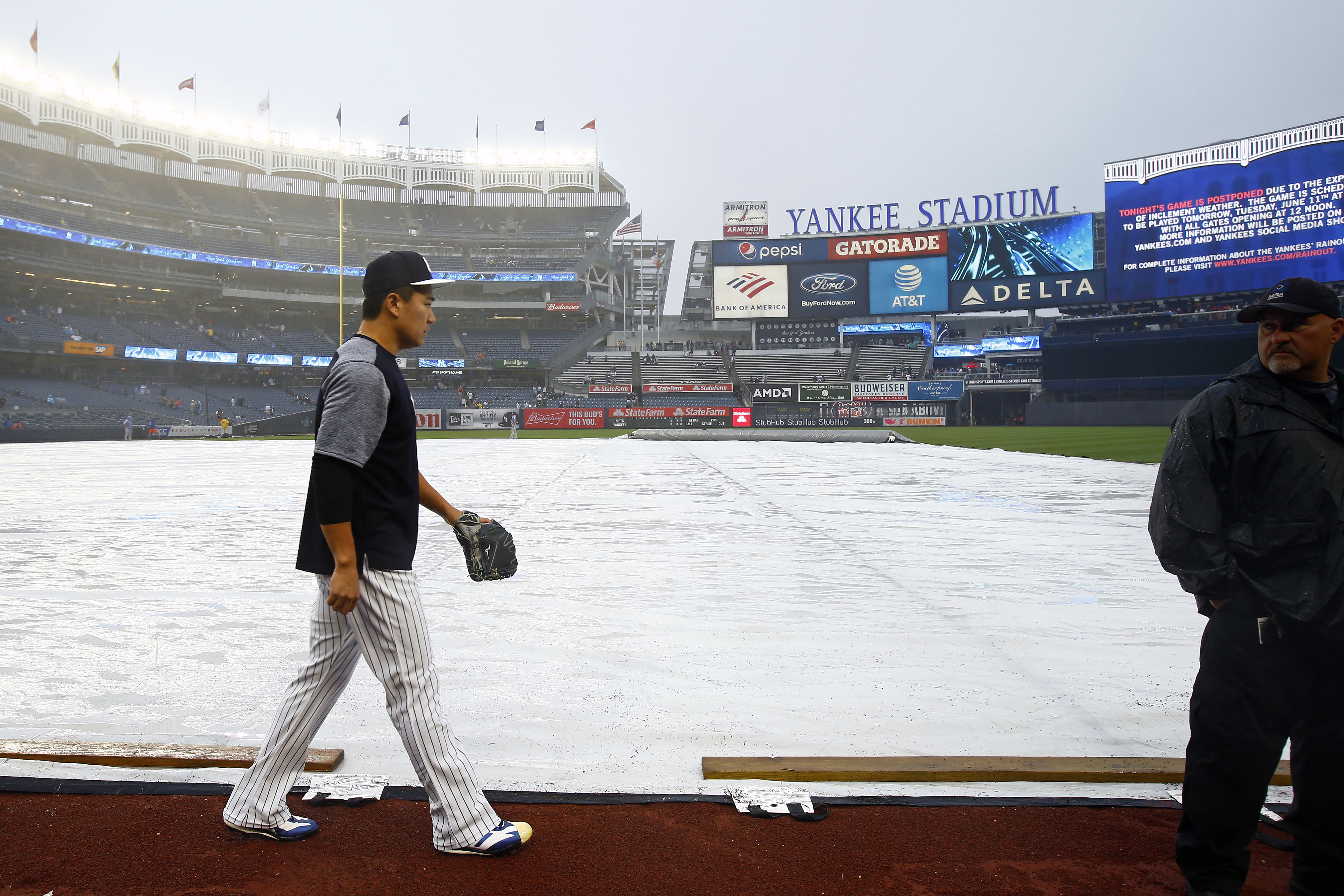 I’m peeved. I bought one of the new Pinstripe Pass tickets (standing-room only admission to a Yankees game with a drink included) for Monday night’s Yankees/Mets game, the first in this year’s Subway Series. The ticket was $35 plus a gazillion in fees, which was still the best deal available for the game.

Anyhow, it rained all day in New York City on Monday, yet the Yankees kept on insisting they would play the game. I feared that I would schlep all the way up to the Bronx for nothing, so I stalled as much as I could before taking the 4 train up there at 6:15 p.m. At that point, the Yankees had opened the gates and were selling food, drinks, and souvenirs. And the parking lots by the ballpark were doing their usual price gouging of customers. ($45 to park? Are you kidding me?)

I got off the subway about a half hour later, only to notice that the other side of the 4 train Yankee Stadium platform was packed with Yankee fans. Uh-oh. Then a helpful MTA employee told us that the game was cancelled and that it would be rescheduled for 1:05 p.m. for a split doubleheader. He was the MVP of this story in saving fans time and money by telling them the news before they left the subway station.

Turns out that the Yankees finally pulled the plug on the game due to inclement weather just a half hour before it started, even though they knew that same weather forecast hours ago. (Of course, they wouldn’t have made any money on the fans on food and booze, though, by not letting them in.) And ironically, when the team brass did cancel the game, it WASN’T EVEN RAINING then! The rain did restart after 9 p.m., though.

This is the third or fourth time just this season that the Yankees have screwed the fans over due to wasting their time (and getting them to spend money) before cancelling. And most of the big tough New York sports media has pretty much ignored this. To my knowledge, only criticism I saw about yesterday came from Andy Martino about the non-refundable parking and Mike Francesa about the team opening the gates at all.

I have yet to hear any real explanation from the Yankees — or anybody in the media ask them — why they couldn’t simply cancel the game hours before and not waste their fans’ time. Ridiculous.

To add insult to injury, the makeup date for the Subway Series game is today at 1:05 p.m., when many fans have to be  at work. I’m only able to go to the ballpark today because I was able to juggle my work schedule.

At any rate, if MLB Commissioner Rob Manfred wonders why baseball attendance is dropping, the way teams (and it’s not just the Yanks who pull this nonense) handle rainouts should be Exhibit A.