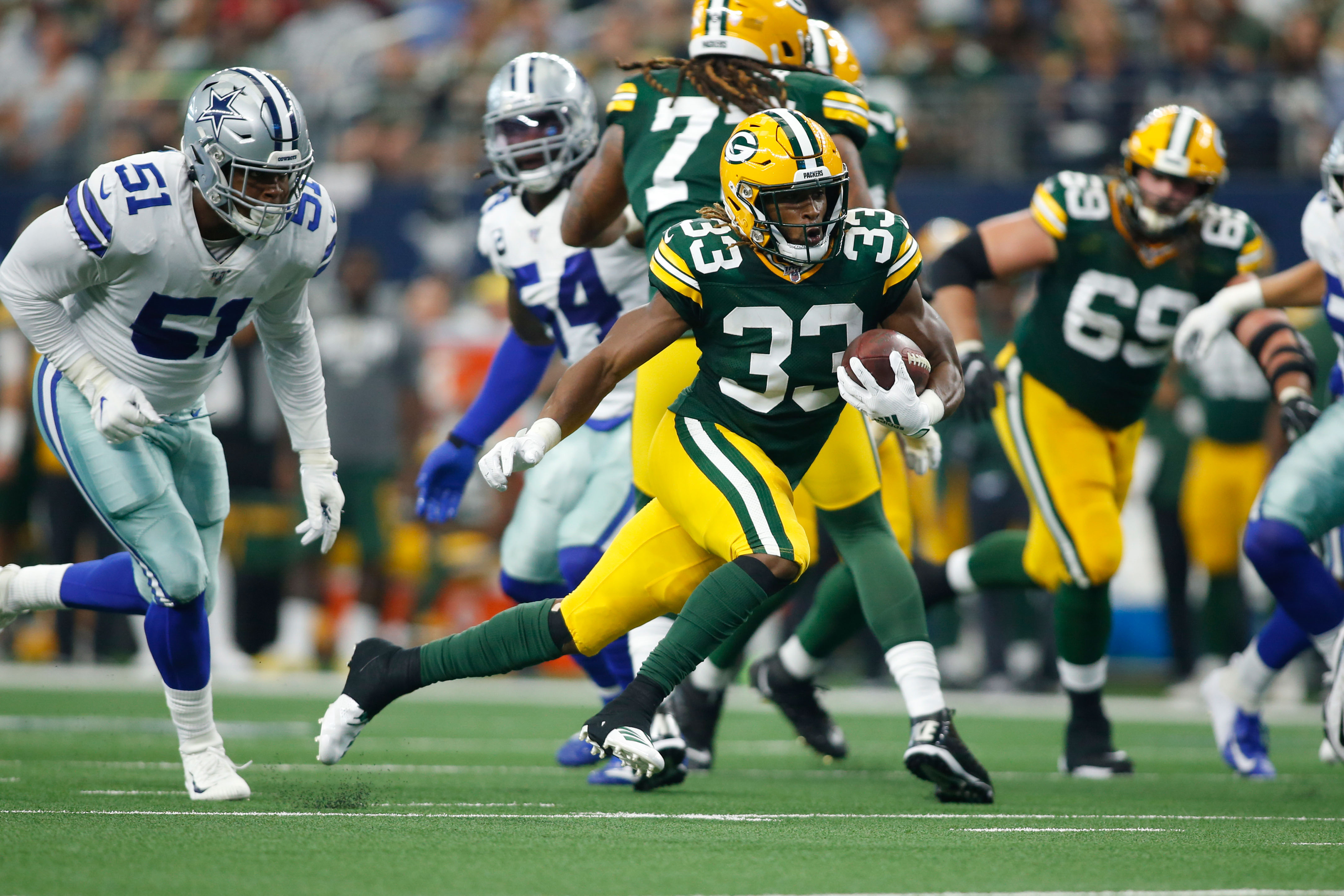 The Green Bay Packers are a storied NFL franchise with more than a century of football behind them. The team’s biggest rivals are their traditional division foes, the Bears, Vikings and Lions each of whom the Packers have played twice a year (except for strike shortened seasons) for more than 50 years.

But who are the Packers biggest rivals outside the NFC North right now? Here are Green Bay’s five biggest non-division rivals. Rankings are based on a combination of present day factors and the history of the series between these teams. Obviously, repeated playoff meetings, controversial finishes, memorable games and facing a team more frequently in factor into this equation.

The Packers and Falcons are scheduled to meet again this year and have played each other nine times in the past decade including two playoff meetings. The Packers blew the Falcons out in the 2010 Divisional Playoffs while Atlanta crushed the Packers in the 2016 NFC Championship Game.

Both teams have been contenders in the NFC for most of the 2010s. Matt LaFleur’s tenure as Falcons quarterbacks coach adds a little spice to the mix as LaFleur coached Matt Ryan during his MVP season.

Most Memorable Packers Win: NFC Divisional Playoffs, January 15, 2011: Aaron Rodgers had one of the best games of his career as he picked apart the Atlanta defense in a 48-21 Packers win. Rodgers completed 31-of-36 passes for 366 yards and three touchdowns while running for another score. Tramon Williams added a 70-yard pick six on the final play of the first half to give the Packers a 28-14 lead.

The Packers and Giants have met 62 times dating back to 1928 with the Packers holding a 29-23-2 edge in the regular season and a 5-3 advantage in eight postseason meetings.

The Packers and Giants share one huge thing in common: Vince Lombardi. The Packers Hall of Fame head coach was the offensive coordinator of the New York Giants before joining the Packers in 1959 and starting the Green Bay dynasty. He defeated his former team in back-to-back NFL title games in 1961 and 1962.

The Packers and Giants also met in the 1938, 1939 and 1944 NFL Championship Games with Green Bay winning the final two after the Giants won the first meeting.

In more recent times, the Packers beat the Giants 38-13 in the 2016 playoffs in a game that included a 42-yard Hail Mary toss from Rodgers to Randall Cobb on the final play of the first half. The Giants beat the Packers in the frigid 2007 NFC Championship Game which turned out to be Brett Favre’s final game as a Packer.

These two teams have played so many memorable games recently it’s hard not to rank the Seahawks among the Packers biggest non-division rivals. Just say phrases like, “We want the ball and we’re going to score” or “Fail Mary” and some of the recent big games between these teams come to mind.

The Packers lead the overall series 11-8-0 in the regular season and 3-1 in the playoffs including last year’s 28-23 playoff win at Lambeau Field. The only Seattle postseason win was Green Bay’s devastating collapse in the 2014 NFC Championship Game that still has Packers fans reeling whenever they think about it.

Overall Record: Packers lead the series 11-8 in regular season and 3-1 in playoffs

Al Harris’ 52-yard interception return for a score in overtime gave the Packers a big playoff win at Lambeau Field. Former Packers backup quarterback Matt Hasselbeck boasted that his team wanted the ball and was going to score at the overtime coin flip and Harris made him eat his words.

Add the fact that former Packers head coach Mike Holmgren was coaching Seattle on this day and former Seahawk Ahman Green was the scored two touchdowns and was the Packers biggest offensive weapon all season and you had the makings of a great rivalry.

The Packers won another famous playoff game four years later when Ryan Grant rushed for a team record 201 yards and three touchdowns in the snow.

The Packers and 49ers have been great rivals since Mike Holmgren became Packers head coach in 1992 after serving as offensive coordinator of the Niners. Holmgren brought the West Coast offense to Green Bay and the Packers have been running some variation of it ever since.

The Packers and 49ers played so many memorable playoff games in the 90s and again more recently with both teams scoring some dramatic wins and enduring crushing defeats.

Packers fans are still angry about the infamous 1998 playoff game that saw Jerry Rice fumble but the officials rule him down by contact which kept the Niners drive alive. A few plays later, Steve Young found Terrell Owens in the end zone in the closing seconds to beat the Packers and end Holmgren’s tenure as head coach in Green Bay.

The Packers announced their arrival as an elite club three years earlier when they thumped the 49ers at Candlestick Park 27-17 in the NFC Divisional Playoffs. Up until then, the Cowboys and 49ers were considered the two best teams in the NFL but the Packers physical beating of the Niners in this game told the league Green Bay was a force to be reckoned with.

Everybody expected the 49ers to win again and face the Cowboys in the NFC title game again, but the Packers set the tone on the first play from scrimmage for San Francisco when linebacker Wayne Simmons forced a fumble and cornerback Craig Newsome ran it back 31 yards for a touchdown to give the Packers an early lead. Brett Favre threw first half scores to tight ends Keith Jackson and Mark Chmura to give the Packers a 21-0 lead they would not relinquish en route to a 27-17 win.

One year later, the Packers would win their first Super Bowl in 29 years after beating the 49ers again in the playoffs, this time at muddy Lambeau Field.

The Packers and Cowboys are two of the most popular and prominent teams in the NFL and they’ve had some of the best playoff matchups in NFL history. The Packers most famous game of all-time, “The Ice Bowl,” came against the Cowboys on December 31, 1967.

The Packers edged the Cowboys in the 1966 and 1967 NFL title games, winning both games by less than one score and in the final minute of the game.

After the Cowboys dominated the playoff meetings in the 90s, the Packers have enjoyed dramatic playoff success against Dallas in recent years including Dez Bryant’s famous no catch in the 2014 playoffs and Mason Crosby’s dramatic 51-yard game winning field goal in the 2016 playoffs that gave the Pack a 34-31 win in Dallas.

There has never been a bigger game than the “Ice Bowl.” The Packers overcame the frigid temperatures (minus-13 at kickoff) and a tough “Doomsday Defense” to march down the field for the winning points. Bart Starr’s one-yard quarterback sneak with 13 seconds left gave the Packers a 21-17 win and won them their third straight NFL title, a mark that has never been matched. The drive personified what Lombardi’s Packers were all about and put the Packers alone as the only team to win three straight titles in the playoff era.