5 rational thoughts about the Celtics shooting the Raptors' lights out 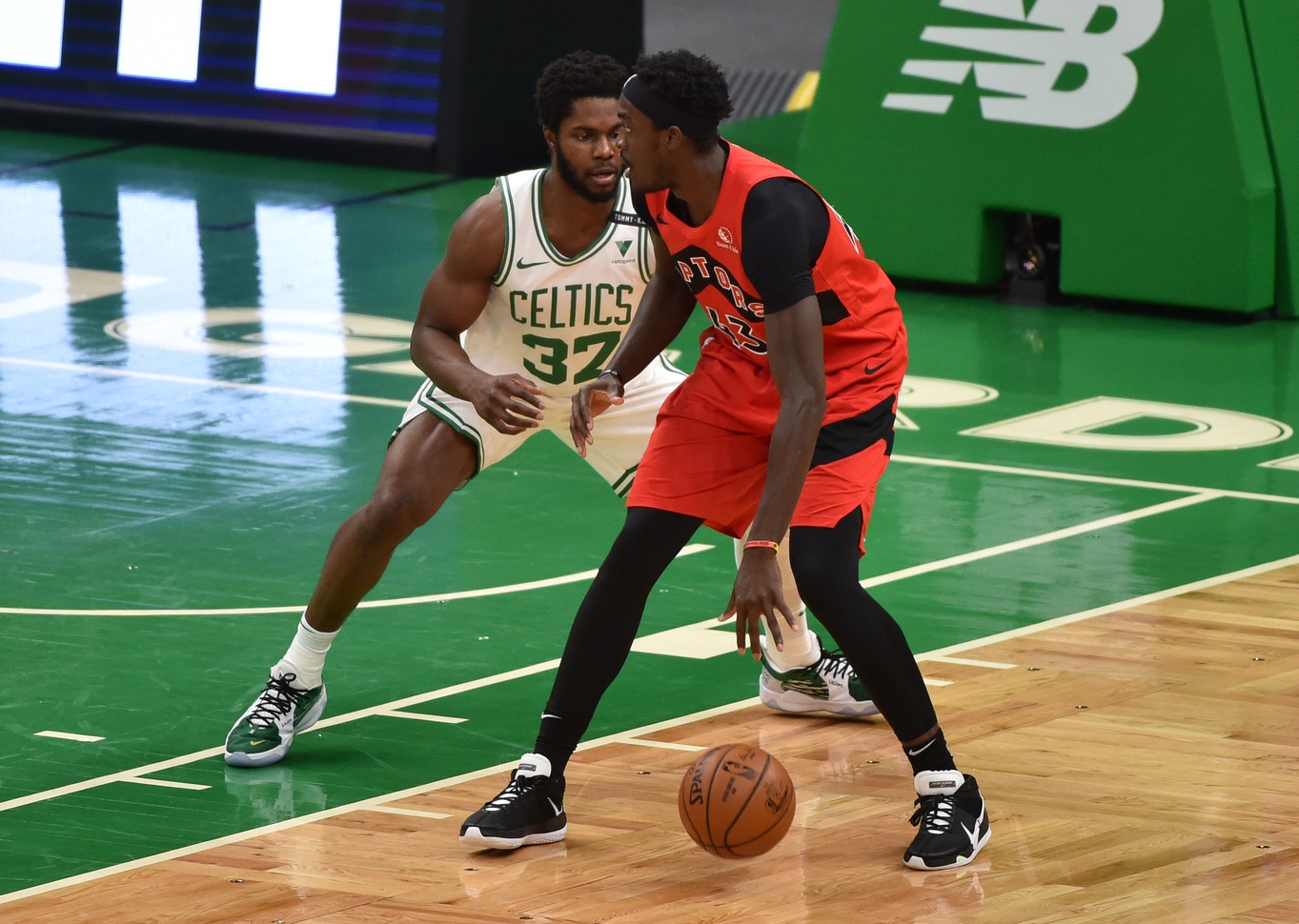 5 rational thoughts about the Celtics shooting the Raptors' lights out

If the Celtics wanted to erase memories of the depressing finale to their West Coast road trip, last night’s victory against the Raptors was a great step in that direction.

This game was a must-win against a semi-surging conference opponent, as opposed to an almost-expected loss to the Western Conference’s best team. Let’s look at the key factors:

The big picture of the Cs victory was, of course, the team’s tremendous three-point shooting—20 long-range makes from deep on 39 attempts, 51.3%—and the main sources of it, most notably Semi Ojeleye.

24 points with 6 made triples (on 8 attempts) in 30 minutes, along with 6 boards and his usual strong defense. It’s a big deal, for sure. Not counting this game, Ojeleye has only three double-digit scoring performances for the season, and one of those was the 18 he dropped in a blowout of the Magic. He has his fair share of goose-egg point totals in 20-21, and throughout his career, and he looked more confident as a shooter than he has in some time.

But is this really that shocking? Semi was drafted as a 3-and-D guy. He’s always tracked as a serviceable shooter from deep; if anything it’s poor shot selection (his fault, but fixable) and inconsistent minutes (not his fault) more than flawed mechanics to blame. Including this game, he’s shooting 38% from deep on the season with 3 attempts per. Do I think he has a long future with this team? No idea. But he certainly took advantage of the opportunity afforded him

Payton Pritchard is just the third Celtics player since the 2000-2001 season to produce at least 20 points, six 3-point field goals, and five rebounds off the bench

He's the first Celtics reserve to accomplish that feat since Rasheed Wallace (Nov. 11, 2009)

Pritch is fundamentally skilled in a way that isn’t even surprising to me anymore. I just expect him to make these triples that, at times, border on Steph Curry range. (Not from-the-logo Steph, but regular Steph, which is still pretty wild for an undersized rookie.) He shows little to no fear and frequently backs up his confidence, in a position where many rookies exhibit either timidity or entirely irrational, unearned confidence.

3. The Jays exploiting the Raptors’ targeting

As I noted in the game recap, Toronto made an obvious and concerted effort to neutralize Jaylen and Jayson’s scoring punch. Doing so did force Jaylen into bad shots that he often missed, and it kept Tatum below 20 points (which is…not a common thing these days). But whoever ordered this gambit, presumably Raptors head coach Nick Nurse, seemed to think that no other Celtics would shoot from the perimeter. This seemed unwise. Christ, I know Boston has been uneven lately, but I mean…even Jeff Teague shoots 41% from deep. Offense has not really been the Cs problem.

Brown and Tatum realized what was happening and exploited it brilliantly, combining for 19 assists in the process. It’s great to see both of the Jays facilitating such effective ball movement, and it also speaks to their ability to stop on a dime and alter their usual approaches as necessary. That’s an underrated but essential skill—one that even some nominal stars never really develop.

4. Kemba thriving in a different role

If we’re noting how Brown and Tatum worked so well as playmakers, it’s only logical to point out how Kemba Walker adapted to being off-ball a fair amount of the time. Two nights removed from a putrid outing in Utah, The Man from UConn took advantage of the defensive inattention Toronto paid him and bombed away from deep, with particular effectiveness during the third quarter. (Also, he racked up free throws on drives to the basket, and though he should be doing that more often, I’d guess he probably will as his injury goes further in the rearview and his confidence grows.)

This is extremely important. Kemba has shown willingness to defer to the Jays, so it’s not a matter of buy-in but of past necessities (his backbreaking usage rate on Hornets teams with zero options) dictating present habits. In this situation he realized what Toronto was doing and deferred not his scoring ability but his position as offensive initiator, functioning instead as a 2-guard ready to pop off when defenders ignored him. If this is a mode Walker can switch to at will, it may be the best possible option for the Celtics moving forward.

5. A big lineup that works?

Some caveats here: Daniel Theis, Tristan Thompson and Grant Williams did not exactly light it up scoring-wise last night. (Theis couldn’t even successfully contribute to the three-point shootout, which is odd given how effective he’s become from deep this year.) Also, early in Q4, a variety of bad shots and mental mistakes, particularly in at-the-rim-defense, by Thompson and Williams combined to let Toronto get within five points of Boston. Pascal Siakam, Chris Boucher and Aron Baynes (miss u buddy) took advantage of the chances given.

That said: The big-man duo with which the Cs started the game (Ojeleye and Theis) were important in dictating the tempo of that first quarter. Even if you think Ojeleye was just thriving in an irregular situation, using Theis as starting center with Grant, Ojeleye or even Tatum at the 4 (when Marcus Smart comes back and plays 2) seems reasonable overall. Thompson doesn’t appear to mind coming off the bench and was, early Q4 issues aside, very good in that spot, with a lot of critical rebounds in the third quarter. This whole issue is very much wait-and-see, but the game we just saw does suggest some viable approaches for the oft-problematic big rotation.