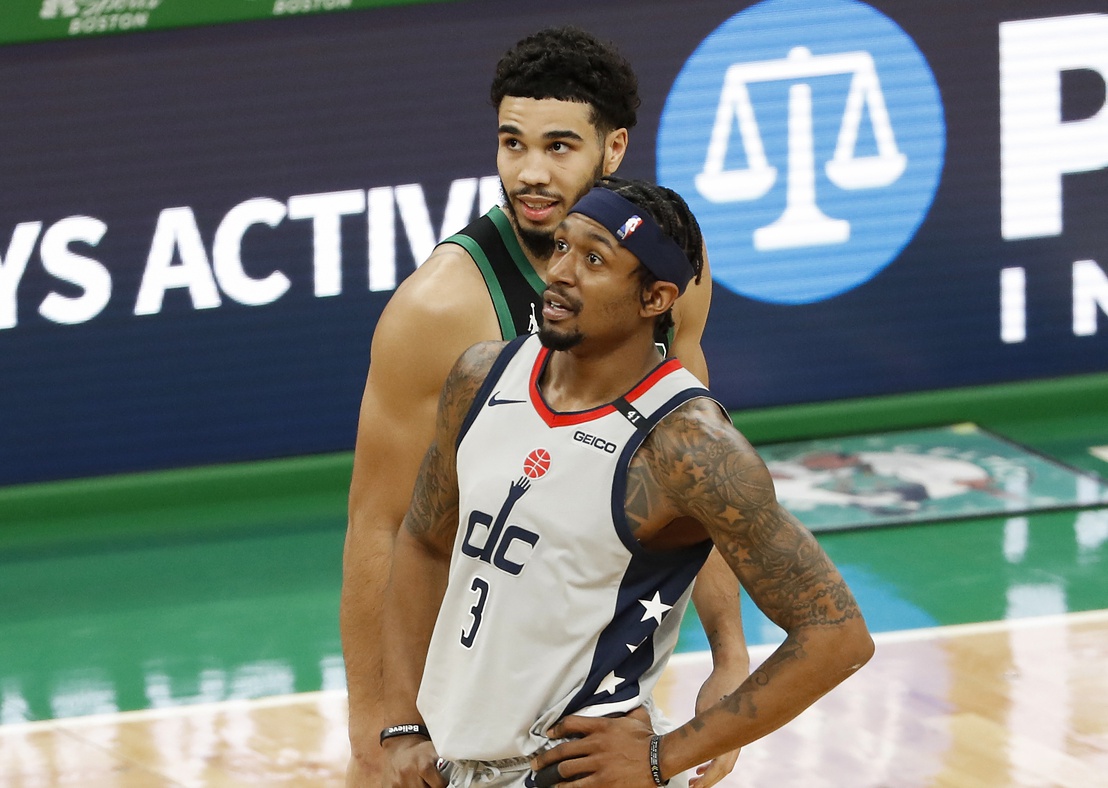 Well. We all thought that Celtics game was gonna slip out of reach—or at least I did—and then it didn’t, and they won. They just might be able to establish that fabled thing called “momentum.” Let’s have a look at what mattered most:

Computer, show me the game-winning basket:

Secured the W with this @JetBlue Play of the Game. pic.twitter.com/i1ORI2Ds9x

Just two nights after what was, for him, a ho-hum scoring performance, Tatum played a masterful game. He was outstanding for just about all of his time in the floor, but he crucially took over in the final minute of a contest that appeared to have collapsed for the Celtics just as so many had in recent weeks. He split up the Wizards’ defense (historically bad under head coach Scott Brooks, but pretty wood in their recent hot streak) as the roll man on simple but excellently executed PNRs to get those shots.

Remember early last season when he was having trouble with his floater? Hard to imagine him missing floaters or layups these days.

No one wanted to hear that Kemba Walker was Starting To Play Well Again, Actually when the Cs were in the serious depths of their funk. (Which, to be clear, they’re not entirely out of, but baby steps.) But he has been, and in the last few games it’s starting to bear real fruit.

In this game, he scored plenty (21), but you can reasonably argue he contributed to the W even more by functioning more as a floor-general point guard than he sometimes does. After Washington took their first lead of the game, Boston had a hard time responding until Kemba came back in and started running some PNR with Daniel Theis and Rob Williams as the roller, which helped stabilize things, and then Tatum made some big jumpers. In the final minute when things looked bleak as f**k, the Cs basically ran the same PNR in rapid succession but did so for Tatum, and it also worked. Kemba is, as we know, an elite PNR player. Sometimes simple is the best possible solution.

There were 40 of them taken in the first half alone, mostly by Bradley Beal, which isn’t surprising given his proclivities as a drive-the-lane kinda guy. The Celtics were concentrating on limiting opportunities for the rest of the Wizards, which they often did successfully, so they weren’t concentrating a lot on defending Beal without fouling. On the other end, the Wiz were hardly trying to defend without fouls at all.

It’s what it is, I suppose. But good God almighty it makes for a disjointed viewing experience. If we were to have so damn many of them, I wish Tatum could’ve gotten a few more than he did, because he was driving through some pretty obstinate defense when he went to the bucket. Like, on the call for the game-winning bucket, Mike Gorman was convinced Tatum got fouled, as was I. (Still kinda am.)

4. Progress toward ending The War on Theis

Speaking of free throws, Daniel Theis shot more of them (6) than any other Celtic! Would’ve been nice if he made more than half of them—given the progress he’s made as a jump-shooter, you’d think those would also get easier too—but c’est la vie. He was getting calls he often doesn’t, and that’s a net good. (Though the refs still can’t resist calling travels on him that don’t get called against plenty of other players.)

Oh, there was also that whole “scoring 20 points” thing, 8 of them during an otherwise bleak stretch for Boston’s offense in Q4. That was pretty cool.

Close as this game was, and undeniable as it is that the Celtics still made some of the mistakes that have crushed them in other situations, it seemed to me like they did a better job adjusting to pressure than they have of late. (The same was true in the Pacers game.) I’ve already noted how they did it offensively, but they also kept themselves together on the other end. Remember that trap Tatum and Javonte Green hit Beal with, successfully getting him to slip out of bounds without fouling him. Or their response on this final Wizards play:

Boston Celtics staff & players recognized and adjusted to the same Wizards play that beat the Nuggets to close out the win: pic.twitter.com/qyO4XgfP38

The guy above breaks it down in super slo-mo if you’re interested. TL;DR of it is, Westbrook manages to get it to Beal who’s like 4 feet from the basket at the time and able to draw contact from Nuggets defenders, whereas here, Beal gets it and is immediately double-teamed at the perimeter. He still almost makes the shot, because he’s extremely good at shooting…but more than a few shooters similarly trapped would’ve airballed that. It’s the stuff you like to see.