5 rational thoughts about the Celtics blocking out the Suns 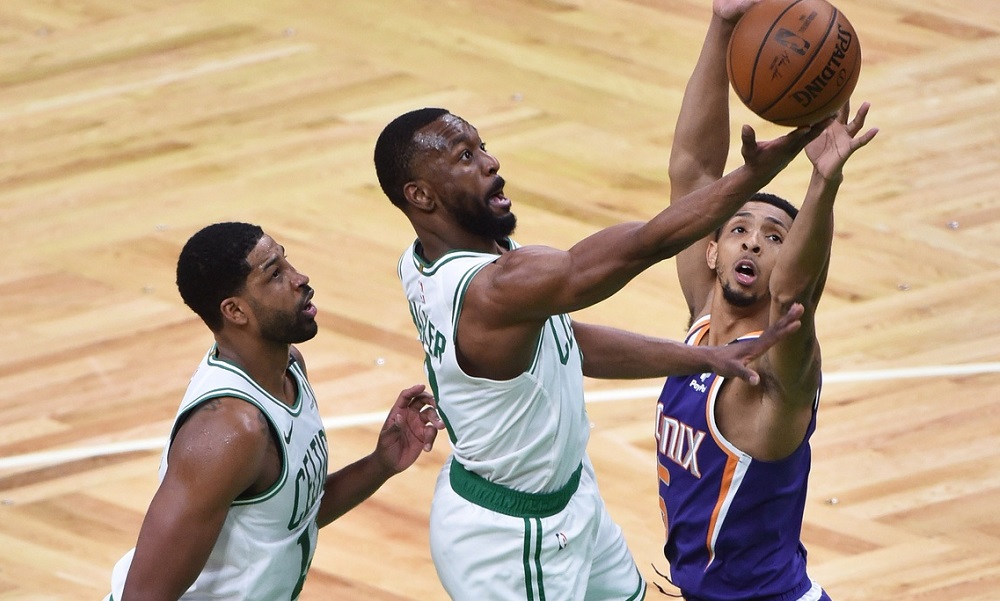 5 rational thoughts about the Celtics blocking out the Suns

Here are some next-day thoughts about the Celtics taking down the Phoenix Suns, 99-86, on Friday night.

To borrow a line from Mark Twain, the reports of Kemba Walker’s demise were greatly exaggerated. He is not too old and too injured. In fact, he was the best player on the floor last night. He had the offense:

What a night for our @Gatorade Player of the Game, Kemba Walker. pic.twitter.com/pKcPItOASS

Kemba Walker (right) hit every shot he took in the paint tonight. Has to be among his 3-5 best games with the #Celtics period. pic.twitter.com/2pD7EhIucV

He also had the defense, taking three charges from Devin Booker, causing the Suns’ leading scorer to foul out with just 15 points, 10 below average. From Celtics.com:

Despite playing in less than two-thirds of his team’s games, Walker is now tied for the league lead in charges drawn, having logged 19 in just 38 appearances.

Who knew Kemba was the Booker stopper??

All of this was a continuation of recent strong play.

The Celtics are 8-1 when he plays in that span. pic.twitter.com/s5SsSdSNn7

If this keeps up, one day Kemba might actually break out a Walker Wiggle.

Is Jayson Tatum hurt, tired, or just in a brief slump? Or some of each?

It’s a measure of how good Tatum has become that we wonder what’s wrong when he doesn’t dominate. With that said, though, two straight 3 of 17 outings are way off. Relevant: In the April 21 injury report, before the Phoenix game, Tatum was questionable with a left ankle impingement.

What about before that? Maybe it’s just this simple.

Assuming the Celtics ever have a chance, Jayson Tatum looks like he could use a night off.

Tatum has played in 53 of Boston’s 59 games, averaging 35.6 minutes – both team highs. His usage rate of 30.4% also leads the team. He’s carrying a heavy load, and now dealing with the ankle, so a drop in scoring perhaps should not be surprising.

The Celts have six more games before they get two straight off days, so there’s no relief coming soon. But Brad Stevens needs to find a way to give Tatum a break.

Before the game, the Celtics made an announcement.

Breaking out the classic home whites for tonight's showdown with Phoenix ☘️ pic.twitter.com/zheSawbNET

This is what it’s come to in the era of multiple alternate uniforms. It’s actually news when the team wears the design that was normal for about 70 years. Fun fact: according to Chris Forsberg, the Cs are now 11-0 when wearing the classic white unis. They’re not above .500 in any other jersey this season.

Ever since the Malice at the Palace happened in 2004, the NBA has done everything possible to legislate all types of confrontation out of the game. But sometimes, getting a technical foul is worth it.

We had a bit of a scuffle here pic.twitter.com/iRIKt7YQ2q

Not sure what Torrey Craig did to piss off Tristan Thompson, but it was good to see TT fired up. Earlier this season, the Celtics were accused of not playing hard, of lacking intensity. We’re not hearing that any longer. The energy has picked up just at the right point of the season, and Thompson’s physical play seems to have inspired that.

The playoffs are four weeks away, and this little skirmish was a reminder that you need to play with an edge to win in the postseason. Here’s a brief reminder of what that’s like.

Throwback to the Punk Rock Celtics of 2016-17 pic.twitter.com/yfQvNcOT55

We considered using this final thought to note Evan Fournier’s impending return to the active roster – looks like tonight’s the night.

But … we have to shout-out Deuce Tatum. It’s impossible to keep him out of the spotlight. Even All-Star opponents know this, and respect it.

Chris Paul just wanted a photo with a legend. pic.twitter.com/QxV7GBHxSu