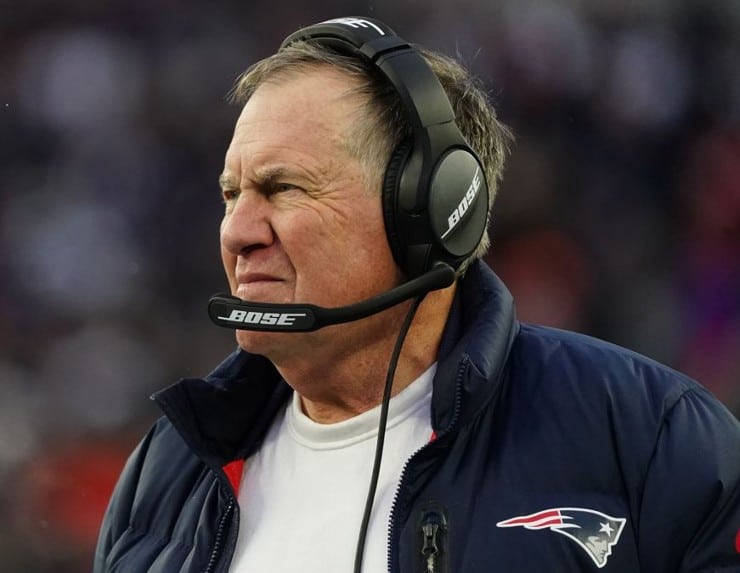 Bill Belichick is one of the greatest coaches in league history, but he’s also an overrated NFL coach. And it’s possible for both claims to be true. After all, Belichick has won eight super bowls in his coaching career, with six won as the head coach of the New England Patriots.

Years ago, Belichick once said, “Football is a player’s game.” The sport is all about teamwork, execution, talent and coaching. The greatest coaches in NFL history have won super bowls with talented quarterbacks.

Vince Lombardi had Bart Starr, Weeb Ewbank had Johnny Unitas, Chuck Noll had Terry Bradshaw, Bill Walsh had Joe Montana and Belichick had Tom Brady. The list goes on and on.

Each of the coaches listed above won championships with a hall of fame quarterback. That’s the common denominator. But in Belichick’s case, Brady is still playing. The Tampa Bay Buccaneers quarterback is 29-10 without his eight-time super bowl champion coach.

Furthermore, Belichick is 71-79 without Brady. These statistics below might also come as a shocker to many Patriots fans. Without the seven-time super bowl champion quarterback, Bill is 29-58 against above-.500 teams, 38-37 at home and 1-2 in the playoffs.

Remember when we all spent a decade or more debating who mattered more to the Patriots dynasty: Tom Brady or Bill Belichick? Boy, that was a really dumb debate. It was Brady. And it wasn’t even close.

Not to mention, under Belichick, the Patriots have never won a playoff game without Brady. To add to that, Belichick has no AFC East division titles without Brady. It’s as if he’s just an ordinary coach, which we all know isn’t true.

Overrated or not, Bill Belichick has accomplished a lot with the Patriots

Belichick’s defense held “The Greatest Show on Turf” to just 17 points in Super Bowl XXXVI. Kurt Warner and the Rams offense led the league in scoring, averaging 31.4 points per game. During the second quarter, Patriots defensive back Ty Law ran back Warner’s pass for a pick-6.

Now, while Super Bowl LIII was arguably the most boring super bowl of all time, it was also Belichick’s defensive masterpiece. The score remained at 3-3 throughout most of the game. Patriots cornerback Stephon Gilmore made the game-winning interception off one of Jared Goff’s late fourth-quarter passes.

Nonetheless, those were Bill’s greatest accomplishments with Brady. Last season, the Patriots finished 10-7 with rookie Alabama quarterback Mac Jones. Then, in the 2022 AFC Wild Card game, the Patriots were pummeled 47-17 against the Buffalo Bills at New Era Field.

This was quite possibly Belichick’s ugliest loss of his head-coaching career. It was a playoff game! This is all the more reason why fans think Bill is overrated. The 2003 Patriots opened up their season with a 31-0 loss to the Bills. Though, it was just a regular season game. So, no harm done.

Tom Brady proved critics wrong after signing with the Buccaneers

But what’s the point of all of this? Brady has won a ring without Bill Belichick. What happened to all the “system quarterback” talk? He threw 40 touchdowns in his first season with the Bucs and finished with 43 touchdowns last season.

During the 2020 playoffs, the three-time MVP had to defeat three hall of fame quarterbacks on the road with the Buccaneers: Drew Brees on the Saints, Aaron Rodgers on the Packers and Patrick Mahomes on the Chiefs.

Belichick turns 71 next April. How many years left does he have to coach the Patriots? That’s the ultimate question. If the Patriots are awful in the upcoming 2022 season, there’s also a chance that owner Robert Kraft will take away Belichick’s title as the team’s general manager. Enough is enough.

Additionally, Bill Belichick is overrated because of Joe Gibbs. While certainly not the greatest coach in the regular season, Gibbs has proven his ability to overcome adversity in the playoffs. That’s the kind of coach you want leading your football team.

As head coach of the Washington Redskins (1981–92), Gibbs became the only coach in NFL history to win three super bowls with three different starting quarterbacks. Talk about giving Belichick a run for his money.

Currently, Belichick has won three more championships than Gibbs as head coach of the Patriots, but he also had Brady as his quarterback for all those super bowl wins.

Without Tom Brady, if Belichick can win just one super bowl as head coach of the Patriots, quite a few NFL analysts and fans will take back a lot of this fair criticism. If a veteran coach can only win playoff games and division titles with a hall of fame quarterback, it will change public opinion.

Some would say that a football coach is only as good as his players. This is true. Then again, Belichick is also the Patriots’ G.M. He is responsible for drafting and developing prospects each football season.

If the Patriots continue to underperform without Brady, Bill Belichick will be to blame. Keep in mind, he’s still a great coach, but he’s overrated without TB12.

The Patriots are entering the 2022 season without Stephon Gilmore and J.C. Jackson, their two great defensive backs. Gilmore was traded to the Panthers last season.

Then, he signed a two-year, $23 million contract with the Indianapolis Colts. During free agency, Jackson signed with the Los Angeles Chargers. Were both moves mistakes? How about re-signing Malcolm Butler? It reeks of desperation.

To many Patriots fans, the team would have won Super Bowl LII had Belichick not benched Butler. The team surrendered a super bowl-high 41 points against the Philadelphia Eagles. A stop on third down or a turnover on downs could have been possible with Butler.

Lastly, when Belichick won his first two rings as defensive coordinator of the New York Giants, he had Lawrence Taylor. Again, evaluating talent is important, and that falls back on Bill Belichick, the G.M.

It should go without saying that it’s harder to win football games with less talented players. Belichick is making himself appear overrated as a coach, when he tries to do everything with dirt-cheap players. He should have given up the G.M. job a long time ago.