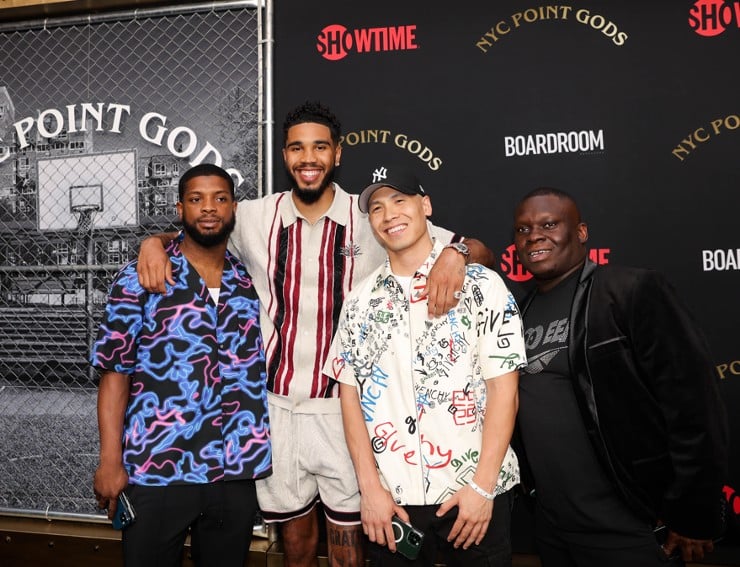 Celtics forward Jayson Tatum was asked about his team’s interest in trading for Kevin Durant, while he was at the premiere of the Showtime documentary “Point Gods.” ESPN’s Nick Friedell talked to the three-time All-Star about the buzzing Durant trade rumors.

“I played with [Durant] during the Olympics,” said Tatum. “Obviously, he’s a great player, but that’s not my decision. I love our team. I love the guys that we got…”

“We got two new pieces [in Malcolm Brogdon and Danilo Gallinari]. I love our team. I just go out there and play with my teammates, and I don’t put that [general manager] hat on to make decisions.”

Of course, Durant is an executive producer of “Point Gods.” However, he refused to talk to the media at the film’s premiere.

Will the Celtics listen to Jayson Tatum?

Days ago, one report leaked suggesting that Celtics G.M. Brad Stevens offered Jaylen Brown, Derrick White and a first-round draft pick for Durant. Though, the Nets were also interested in acquiring Marcus Smart, last season’s Defensive Player of the Year.

By the sounds of it, Brown and Smart are not interested in this trade package. They want to keep playing in Boston. So, Tatum is mimicking their thoughts with his comments to Friedell. If the front office is unwilling to listen to Brown and Smart, maybe Tatum voicing his displeasure for a Durant trade will work.

In the final week of July, Durant trade negotiations are stalled across the league. Deandre Ayton signed a four-year, $133 million offer sheet with the Pacers, and then the Suns matched the offer. He is now signed to a multi-year deal with Phoenix.

Plus, the Heat are not interested in trading away Bam Adebayo for the two-time Finals MVP. In other words, Miami’s trade package is not as appealing to Nets G.M. Sean Marks. Multiple teams have been scratched off the list.

If the Celtics’ roster remains intact for next season, can they return to the NBA Finals with Jayson Tatum? Place a futures bet today.

Durant could stay with Brooklyn for the next couple of months

At this point, it appears Durant will remain in Brooklyn for at least a few more months. In June, Kyrie Irving exercised his $36,503,300 player option with the team for the 2022-23 season. Durant said he asked for a trade from the Nets after how he saw the front office treat Irving last season.

Marks could still move Durant via an in-season trade next season. If not trading the four-time scoring champion, how about Irving? Before last season’s trade deadline, the 76ers traded Ben Simmons, Seth Curry, Andre Drummond, a 2022 first-round draft pick and a 2027 first-round draft pick to the Nets for James Harden.

Other articles related to Jayson Tatum, the Celtics or the Nets are on the main page.