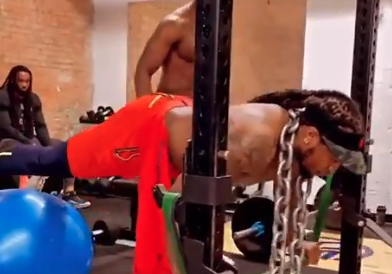 NFL players have been known to push their bodies with arduous workouts, but Titans running back Derrick Henry continuously takes that concept to another level.

We’ve seen him do traditional powerlifting exercises such as deadlifts and squats, but also compound exercises, even in the comfort of his own backyard. He also runs up hills, and even worked out in a vacant parking lot during the height of the pandemic, since gyms and training facilities were closed.

And given that it’s currently the offseason, King Henry is hitting the gym as hard as ever. We know that because a workout video recently surfaced, showing him doing BOSU balance push-ups — a difficult core exercise as is — with chains strapped around his neck for extra resistance.

We couldn’t have done one single rep. Props to Henry for finding new ways to stay jacked.