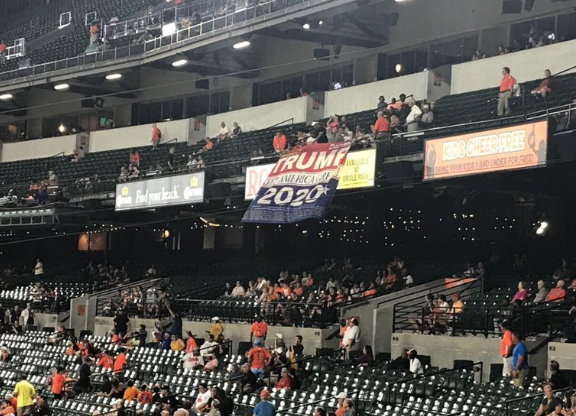 Baltimore is known to be a liberal city, so what happened during the Orioles’ most recent game was quite interesting.

One particular fan attended Thursday’s Blue Jays-Orioles game at Camden Yards, and elected to sit in the outfield. The Orioles got destroyed in the game, 11-2, but that’s not what everyone was talking about.

The fan generated more headlines than the Orioles and Blue Jays combined, as he unfurled a “Trump 2020” banner in the outfield during the game, as you can see below.

A “Take it down” chant broke out at Camden Yards as this was unveiled in the eighth inning tonight. The banner has not been well-received. #Orioles pic.twitter.com/Orr7rqn8im

It didn’t take long for the fan to get removed from his seats, and subsequently ejected from the game.