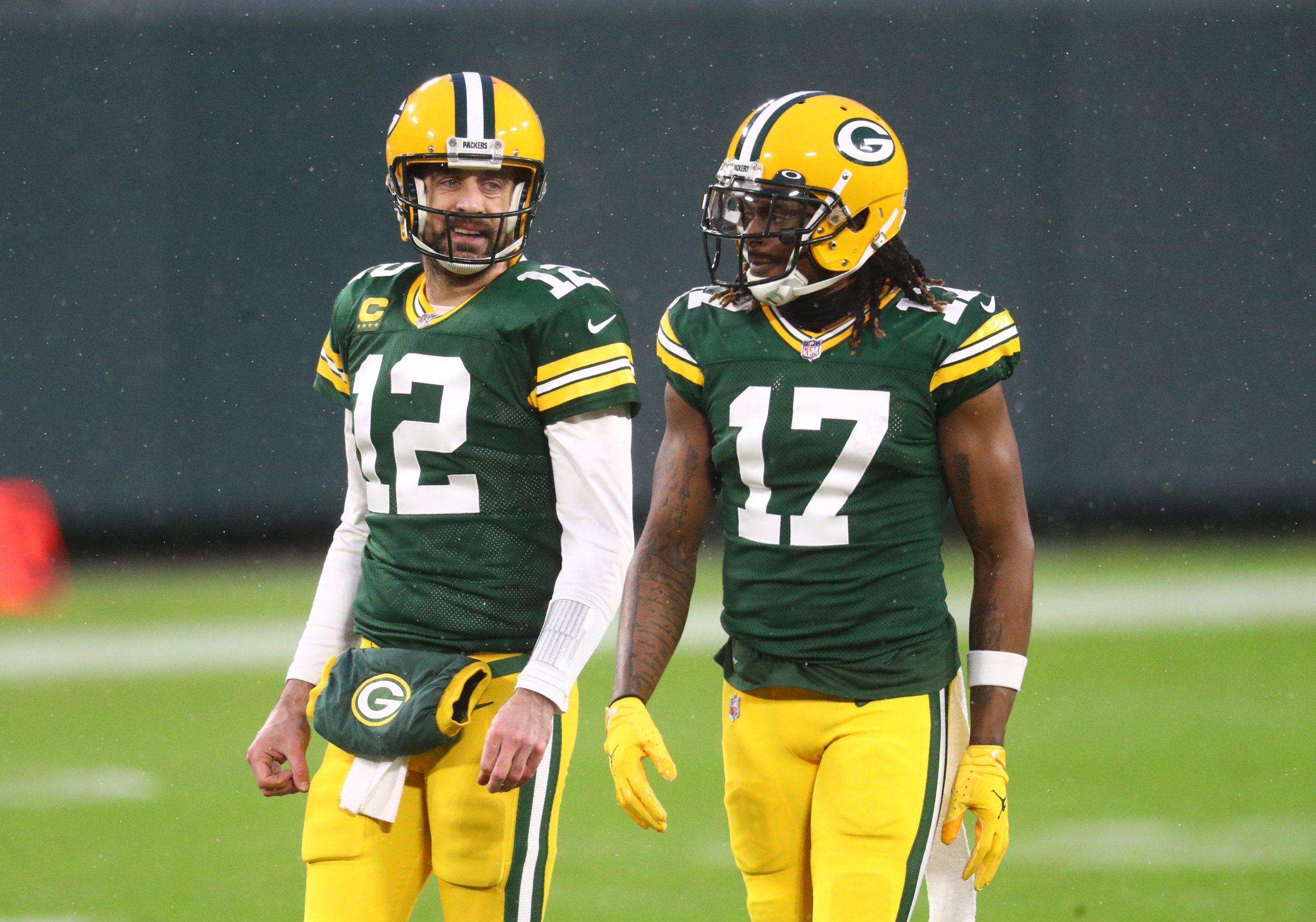 The offense was one of the best in the league at scoring on their opening drive and set a record for points scored in the second quarter. The offense did stall at times, often in the third quarter after they had already taken a lead.

Still, overall, the Packers offense was playing at an elite level. They featured a 4,000-yard passer, a 1,000-yard rusher and a 1,000-yard receiver. In total, six members of the offense were voted to either the Pro Bowl or the All Pro Teams at the conclusion of the season.

Here are the grades for the Packers offense in 2020. The marks are based on a combination of expectations and performance. Grades are listed for each position group with each player’s comments and analysis discussed within the group paragraph.

Aaron Rodgers returned to MVP form and is the favorite to win the award. The future Hall of Famer completed 70.7 percent of his passes and 48 touchdowns, both career highs. As usual, he limited his interceptions, throwing only five all season. His quarterback rating was 121.5, the second highest of his NFL career behind only his 2011 campaign.

Rodgers grew more comfortable in Matt LaFleur’s offense in his second season in the system and LaFleur installed more of his plays this year. Rodgers did a great job of calling audibles and running RPOs. He didn’t hold the ball as long as he did in the past and was generally more willing to take shorter, safer passes when splash plays were not available.

Backup Tim Boyle played in eight games but never threw a pass. He ran 13 times in the victory formation for minus-nine yards. The coaching staff believed that Boyle took a large step forward this season, but he never got a chance to show it on the field.

First round pick Jordan Love was inactive for every game this season. Love was expected to sit and learn in his rookie season anyway, but the lack of preseason games, an offseason program and Rodgers’ outstanding play ensured he wouldn’t see the field at all this season.

Aaron Jones had his second straight thousand-yard season and gained a career-high 1,104 yards in 14 games. He averaged 5.5-yards per rush and earned Pro Bowl honors. He is a threat to score any time he touches the ball and has excellent speed and cutting ability.

Dillon spent time on the Covid-19 reserve list but performed well when he got his big chance against the Titans. He finished the season with 242 yards on 46 carries, a healthy 5.3-yard average. Dillon should get more chances next season with both Jones and Williams about to become UFAs and at least one if not both likely to be elsewhere next season.

Tyler Ervin played only eight games before being placed on the IR. He wasn’t as dynamic as last season but still can be a good fit in this offense going forward if he improves his consistency. Dexter Williams was activated from the practice squad for three games and had two carries for eight yards. It is unclear whether Dexter Williams and Ervin are part of the team’s plans going forward.

Overall, this group was deep and successful.

Davante Adams had a career year and established himself as one of the best receivers in the game today. He set a new franchise single-season record with 115 catches for 1,374 yards and 18 touchdowns and did that despite missing 2 ½ games due to injury.

Adams is a big threat in the red zone and had excellent body control that gives him an advantage against defenders right off the snap of the ball. He is in his prime and is now one of the most dangerous weapons in the league.

Marquez Valdes-Scantling established himself as a big play threat and averaged 20.9-yards per catch on 33 catches. His needs to be more consistent and reduce his drops, but he also showed what he is capable of when his game is on.

Allen Lazard missed six games due to a core muscle injury. He is a great run blocker and a consistent target over the middle. Rodgers likes to find him on third down. He finished with 33 catches for 451 yards and three touchdowns in 10 games.

Equanimeous St. Brown was limited by injuries and struggled with drops at key times. He caught seven passes including his first NFL touchdown. Malik Taylor caught five passes in a limited role but saw more work as a return specialist. Tavon Austin caught five passes when trying to take over for Ervin but had little impact on the offense. Darrius Shepherd also caught five passes in eight games but his inconsistency led to his release mid-season.

Robert Tonyan took over as the starter and developed into an extremely reliable receiver and a willing blocker. He caught 52 passes in 59 targets. Rodgers knew he could count on Tonyan to be in the right place and to make the catch. Tonyan deserved a Pro Bowl berth but was overlooked.

Marcedes Lewis remains a strong blocker and a leader in the locker room. He is a check down receiver at this point in his career and he caught 10 passes this season for 107 yards and three touchdowns. He no longer has the speed to split the seam, but he’s smart and crafty and knows how to create a little space especially when the defense is in zone coverage.

Jace Sternberger was set back by injuries this season. He caught 12 passes for 114 yards and his first career regular season touchdown. He started training camp on the Covid-19 reserve list and was slowed by nagging injuries and concussions throughout the campaign. Next year will be critical for his development.

Josiah Deguara was injured in Week 2. He caught one pass for 12 yards in his two appearances and showed some promise as an H-back/TE. John Lovett was a TE/FB/H-back who also contributed on special teams before he was lost for the season due to injury. Dominique Dafney was signed late in the season and made some positive contributions as a blocker and receiver, catching two passes for 26 yards and a touchdown.

Overall, this position is deep but there are several players attempting to return from injuries.

This unit overcame significant injuries and losses to be one of the top graded lines in the league. Guard Lane Taylor was lost for the year in the season opener and was ably replaced by Lucas Patrick who was steady and consistent except for a couple of rough games.

Center Corey Linsley enjoyed his best season and graded out highest among the league’s centers according to Pro Football Focus. Linsley does a great job of blocking on the second level and he’s a smart and tenacious player. He is due to become an unrestricted free agent this offseason and it remains to be seen if the Packers re-sign him. He also missed three games late in the season due to injury.

Elgton Jenkins made the Pro Bowl after playing every position along the line at one point during the season. The second-year man is versatile, smart and physically gifted as both a pass blocker and a run blocker. He has yet to reach his full potential and could become a perennial Pro Bowler.

Left tackle David Bakhtiari remains one of the best pass blockers in football and he’s a darn good run blocker as well. The Packers signed him to a large new contract midseason but he missed the playoffs due to a knee injury and it’s not clear whether he’ll be ready for training camp in the fall.

Billy Turner filled played both tackles and guard for the Pack. His versatility and ability to fight through injuries made him a valuable part of the offensive line. Turner is a leader in the locker room and involved in the community as well.

Rick Wagner did a good job filling in at right tackle although he struggled with the speed of edge rushers when he was shifted to the left side. Wagner held down the fort well and played through several nagging injuries.

Rookie Jon Runyan Jr. filled in several times mid-game due to injuries and showed a lot of potential. Yosh Nijman played almost exclusively on special teams. The Packers remain high on his physical tools and hope he can develop into a serviceable lineman. Ben Braden played four games also almost exclusively on special teams. Draft picks Jake Hanson and Simon Stepaniak didn’t play this season but they were developmental picks anyway and the coaching staff is eager to see if they can contribute more in 2021.