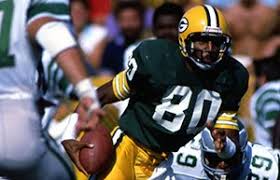 The Green Bay Packers knew they were getting something special when they selected wide receiver James Lofton with the sixth overall pick in the 1978 NFL Draft. The former Stanford star brought a track runner’s speed with soft hands and undeniable talent.

Stanford head coach Bill Walsh, who would soon turn the 49ers into a dynasty, said after the draft, “James will be one of the major factors in the NFL next year. I predict a great rookie year for him. He’ll be outstanding almost immediately.” 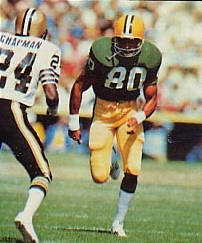 Walsh was dead on accurate. The Packers didn’t throw the ball much in Lofton’s NFL debut, a 13-7 win over the Lions in the Pontiac Silverdome. In fact, quarterback David Whitehurst completed only 3-of-9 passes all game for 31 yards. One was a four-yard toss to fullback Barty Smith, the other was a 17-yard gain on a pass to wideout Aundra Thompson and then Lofton caught his first career pass for 10 yards.

But in Week 2 against the Saints in Milwaukee, Lofton announced to the world that he would be a force to be reckoned with in the NFL.

Lofton opened the scoring in the first quarter when he caught a 42-yard touchdown pass from Whitehurst to give Green Bay a 7-0 lead. Lofton went over the middle, caught the pass between two Saints defenders and sprinted untouched into the end zone.

But Archie Manning led the Saints back and they took a 10-7 lead on a field goal by Rich Szaro and a touchdown pass to Ike Harris.

The Packers didn’t panic, however, and Whitehurst found Lofton a second time on a 47-yard scoring pass. The pass was a wide receiver screen that traveled only a few yards in the air, but Lofton did the rest, getting a good block from guard Leotis Harris and outrunning the other defenders down the right sideline for the score.

In the third quarter, Lofton and Whitehurst connected again, this time on an 18-yard scoring play that saw him dive into the end zone after catching the ball between Saints defenders Ray Brown and Clarence Chapman. That made the score 21-10, Green Bay.

Whitehurst added to the Packers lead with a nine-yard touchdown toss to tight end Rich McGeorge for his fourth TD pass of the day. The Packers cruised to a 28-17 victory.

Lofton finished the day with three catches for 107 yards and three scores. It was the first of a franchise record 32 100-plus yard receiving games for Lofton who still holds the Packers record in that department.

Whitehurst finished the game 10-of-15 for 161 yards and four touchdowns while running back Terdell Middleton gained 114 yards rushing on 19 carries to pace a potent Packers ground game that finished the game with 220 yards gained on 37 carries.

Lofton finished his rookie year with 46 catches for 818 yards and six touchdowns. He caught at least one pass in all 16 games the Packers played and had a healthy 17.8-yard average per catch. He earned the first of what would be eight trips to the Pro Bowl that season.

Despite all he accomplished, Lofton wasn’t pleased with his first season overall. “I was somewhat frustrated in my first year as a pro,” Lofton was quoted in the 1979 Packers Yearbook. “I don’t think I did enough. I appreciate the things I have attained, but I now I could have done better.”

In the early 80s, Lofton teamed with wide receiver John Jefferson, tight end Paul Coffman and quarterback Lynn Dickey to give the Packers one of the most dynamic passing games in the league.

Lofton also earned the respect of Hall of Famer Don Hutson. Hutson told the 1982 Packers Yearbook, “He [Lofton] is one of the finest football players that they have up there and that they have in the league. It’s a pleasure to watch him play.”

Lofton spent nine years with the Packers, catching 530 passes for 9,656 yards and 49 touchdowns while averaging 18.2-yards per catch. He earned Pro Bowl honors seven times in his nine seasons with the Pack and led the league in yards per catch in 1983 and 1984.

Lofton later played for the Raiders, Bills, Eagles and Rams and played on the first three Buffalo teams to go to the Super Bowl. He was inducted into the Pro Football Hall of Fame in 2003.

While Lofton’s speed, intelligence and work ethic helped make him one of the best of all-time, his coming out party happened at Milwaukee County Stadium against the New Orleans Saints. Once he got started, there was no looking back. 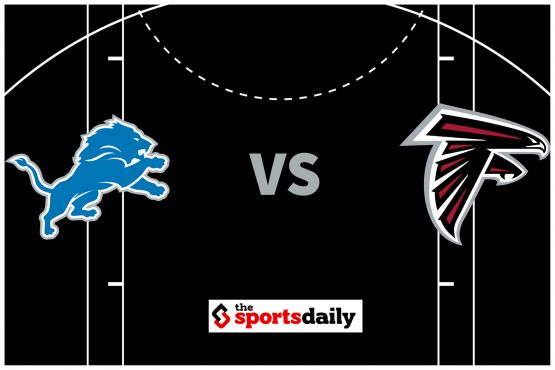