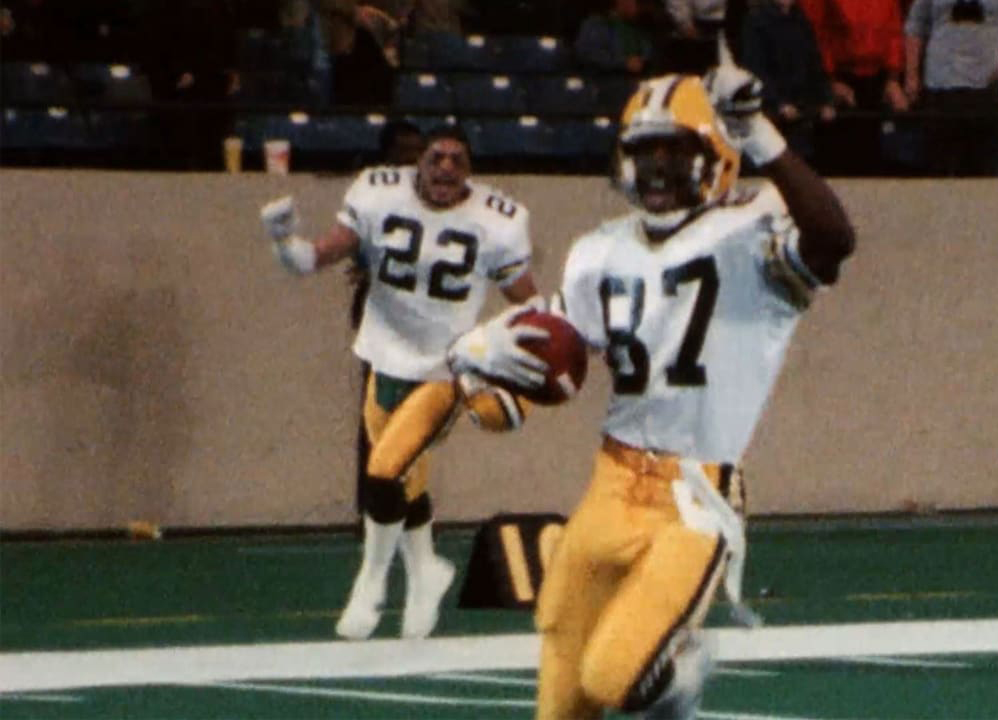 The Green Bay Packers scored their biggest win of the 1986 season on Thanksgiving Day in Detroit and they did it in dramatic fashion. Wide receiver Walter Stanley had a career day, gaining 124 yards receiving and catching two touchdown passes before scoring the winning touchdown on an 83-yard punt return in the final minute of the game. The Packers scored a thrilling 44-40 victory before a national television audience in what was easily the best game in a difficult season for the Green and Gold.

The 1986 season was a tough one for the Packers. Head coach Forrest Gregg was in full rebuild mode after he concluded that the core of the team that Bart Starr had put together was never going to rise above mediocrity. The Pack finished 8-8 in every full NFL season between 1981 and 1985. Before the season started, Gregg released long time mainstays like quarterback Lynn Dickey, offensive tackle Greg Koch, linebacker Mike Douglass and tight end Paul Coffman. They were replaced by young players who struggled to adjust to playing in the NFL.

The results were not great on the field. The Pack entered the Thanksgiving showdown with a 2-10 record and were struggling on both sides of the ball. Just four days earlier, Packers defensive tackle Charles Martin had viciously body slammed Bears quarterback Jim McMahon to the turf after an interception in the Packers 12-10 loss in Chicago. McMahon was lost for the season while Martin was awaiting word on a possible suspension.

The Lions weren’t much better than the Packers. They entered the game at 5-7 and their playoff hopes were more mathematical than realistic. The expectations were not great for this game, but fans were at least hoping to see an entertaining contest. They got that and then some on this Thanksgiving classic that saw 84 points scored, several lead swings and a lot of big plays by both teams.

The Lions jumped out to a quick 10-0 lead on a 44-yard field goal by veteran kicker Eddie Murray and a one-yard touchdown plunge by running back James Jones. The Jones score was set up by a fumble by rookie running back Kenneth Davis on a kick return.

But the Packers rallied. Quarterback Randy Wright got the Packers on the board on a 34-yard field goal by Al Del Greco. Then, the Packers rookie linebacker Tim Harris blocked a punt by Jim Arnold deep in Lions territory and John Simmons fell on it in the end zone to tie the game at 10-10. Two more Del Greco field goals made it 16-10 Packers early in the second quarter and Green Bay seemed to have momentum on their side.

Then, the two teams started trading scores. Detroit added a Murray field goal to make it 16-13. Then, Wright found Stanley for a 21-yard touchdown pass and Green Bay led 23-13. Detroit didn’t quit and pulled to within three just before the half on a 23-yard touchdown toss from Ferguson to wide receiver Jeff Chadwick. At the half, Green Bay led 23-20.

The Lions came out and took over in the third quarter, tying the game on another field goal before taking a 37-23 lead on touchdown passes to tight end Jimmie Giles and future Packers wide receiver Carl Bland.

Late in the third quarter, the Pack answered back with a 36-yard dart from Wright to Stanley to pull Green Bay to within 37-30 after three quarters.

The Packers turned the ball over when Wright was picked off by Duane Galloway but the Packers defense managed to stop Detroit at the Green Bay two and forced the Lions to settle for a 19-yard field goal to make it 40-30 Detroit with just 5:06 left on the clock. Time was starting to run out for the Packers.

To their credit, the Packers didn’t quit. Wright took the Packers 79 yards on just three plays in just 1:35. The drive was capped by an 11-yard touchdown toss to running back Paul Ott Carruth which cut the deficit to 40-37.

The Packers defense forced a punt with 41 seconds left in the game. There wasn’t much time left. The Packers had blocked one punt already in this game so Gregg decided to send everybody to rush the punter to try block another.

Stanley was the punt returner. Gregg told him the punt block was on and instructed him to make a fair catch but Stanley had other ideas. The rush didn’t get there in time and Arnold got the punt away. Stanley fielded it at his own 17 and headed to his left. There were several Lions defenders there so he quickly changed directions and headed for the right sideline. There was room to run. Stanley got key blocks by Eddie Lee Ivery and Mossy Cade. He was gone, 87 yards for the go-ahead touchdown.

“I wasn’t supposed to run,” Stanley said after the game. “It was set up for a block, and I was supposed to fair-catch. But I decided not to because I wanted to get something going.”

“The thing is, I’m expecting to make big plays–not all the time–but if you want to be better than average, you’re going to have to make the big plays, and that’s what I try to do every chance I get,” Stanley added. “I wanted the touchdown because I felt that we needed it. I knew that, hey, this is the time to take chances. You either are going to make it or you’re not going to make it.”

“When the ball came off Jim Arnold’s foot, even though I didn’t have any blocking, I felt like could get around the corner,” Stanley recalled. “I came out at 100 mph and went left, and we were on turf so I was able to stop on a dime, so I spun the other way. When I reversed my field, I placed my hand on the ground, so I came out in more of a track stance. It gave me a fast jump around the corner and I made a few moves to get downfield. There was no possibility for a flag to be thrown because there were no blockers down there with me.”

Even the temperamental Gregg couldn’t be mad at Stanley after that play. “All I know is the guy is a good athlete and has a lot of heart,” Gregg said. “A lot of things can happen, and it did on that. Walter had an outstanding game. I think they probably underestimated his ability a little bit. Nobody will be guilty of that again.”

The Lions hopes ended on their first play after the touchdown when safety Elbert Watts intercepted Ferguson to clinch the win for the Packers.

The Packers finished the season 4-12 but this win was easily the highlight of a difficult season. The Packers had their day in the sun and Walter Stanley had the best game of his NFL career.