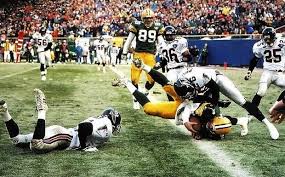 The Green Bay Packers played some of their home games in Milwaukee for more than 60 years between 1933 and 1994. But after 1994, the Packers realized they were losing money by playing in Milwaukee County Stadium and announced that starting in 1995, they would play all their home games at Lambeau Field. It was the end of an era.

The December 18, 1994, game against the Atlanta Falcons would be the Packers final home game at Milwaukee and it was a huge one for the team. The Pack was 7-7 entering this contest and needed to win its final two games to have a chance to qualify for their second consecutive playoff berth under Mike Holmgren. The Falcons entered the game 6-8. A loss would end their slim playoff hopes as well. 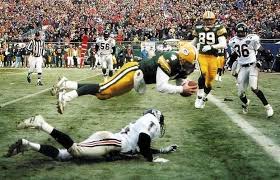 The Packers had a strong first quarter and took an early 14-3 lead on touchdown passes from Brett Favre to wide receivers Sterling Sharpe and Anthony Morgan.

But the Falcons clawed their way back into the game. In the second quarter, Craig “Ironhead” Heyward scored on a two-yard run and in the fourth quarter, Falcons quarterback Bobby Hebert found receiver Terance Mathis for a five-yard touchdown pass. The two point conversion to future Packer Andre Rison gave Atlanta a 17-14 lead with time winding down.

Hebert tried to find Rison for what would have been the game-clinching first down, but cornerback Doug Evans was strong in coverage and Hebert’s pass was off the mark. The Falcons punted and the Packers took over at their own 33 with 1:58 remaining and one timeout left, trailing by three points with the season on the line.

Favre quickly moved the Packers downfield. He connected with tight end Mark Chmura over the middle for 25 yards on the first play of the drive, moving the Packers into Atlanta territory. After a dropped pass by Chmura on the next play, Favre found Robert Brooks for three yards. The clock was still running and the Pack faced a third-and-seven.

Favre found Brooks on an out route for 10 yards and the receiver managed to step out of bounds after picking up a critical first down.

“I threw it as hard as I’ve thrown one all day and Robert made a great catch and stepped out,” Favre told reporters after the game.

Favre stopped the clock with an incompletion then found Morgan for four more yards. Are third and six and the clock continuing to tick down, he found Brooks on a crossing pattern and the star receiver picked up a key first down at the Falcons 17. Then Favre spiked the ball to stop the clock with 19 seconds remaining.

Favre went back to his tight end on the next play and found Chmura for eight more yards to the Atlanta nine-yard line.

On the next play, Favre dropped back and was under pressure by the pass rush of defensive end Chuck Smith. Favre was able to run to his right, barely got past Smith and headed up field. He decided to run for the end zone which was a complete gamble because there wasn’t enough time to get the field goal unit on to try to tie the game if Favre didn’t make it.

Favre tripped a bit at the six, regained his balance a few steps later and leaped into the air for the goal line in a desperate attempt to win the game. He landed just over the goal line just ahead of Falcons cornerback Anthony Phillips for the score.

Holmgren recalled the moment years later. “I told Brett there are two things that can’t happen. You can’t take a sack and you can’t run,” Holmgren recalled. “He runs the play and he doesn’t throw the ball. He starts to run and I go, ‘No! No!’ and he scored by this much. He did not listen to a single thing I said. He said, ‘I knew I could score. I knew I could get in.’ OK. That was one of those games.”

“It’s vintage Brett Favre,” kicker Chris Jacke said after the game. “Dumb and brilliant at the same time. If he doesn’t make the first down or get out of bounds, we’d have been in trouble.”

Instead, the Packers had a memorable, vintage Brett Favre moment and managed to keep their playoff hopes alive.

A week later, the Packers crushed the Buccaneers 34-19 to clinch their second straight playoff berth.

It was a dramatic and fitting finale for the Packers in Milwaukee. “We wanted to come out for the game and give the fans of Milwaukee a little present,” Chmura said. “I’m just glad we were able to do it.”

For Favre and the Packers, it was another magic moment and a special memory.