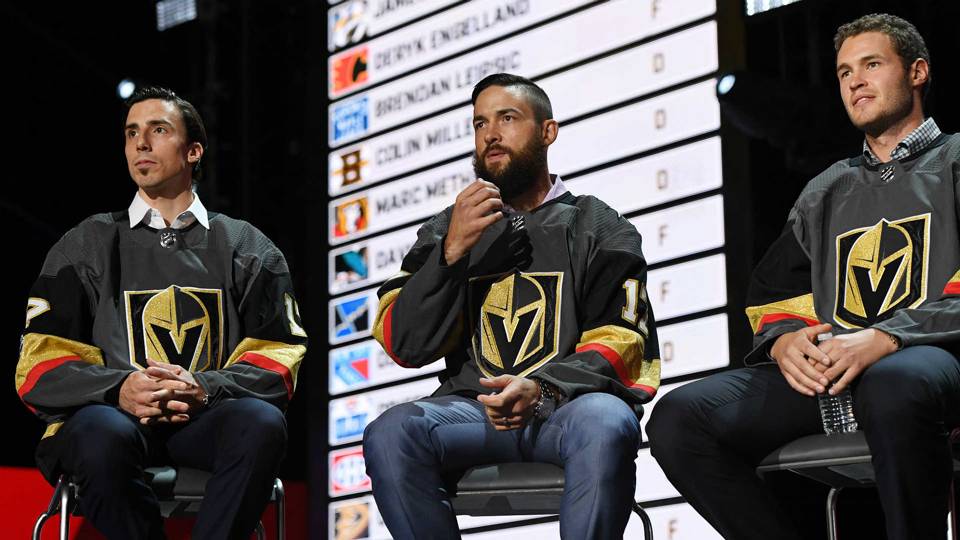 The results of the 2017 NHL Expansion Draft were announced during the NHL Awards ceremony in Las Vegas at The T-Mobile Arena Wednesday night.

While drafting Marc-Andre Fleury and James Neal was expected, there were a few surprises that came from the Golden Knights selections.

It was like a Vegas magic show. POOF! Two prolific goal scorers vanished into thin air.

Not only did the Vegas Golden Knights officially select the Panthers leading scorer Jonathan Marchessault off Florida’s unprotected list, but Florida traded Reilly Smith (a 25-goal scorer in 2015-16) and his $25 million contract to the Golden Knights.

Marchessault had just concluded his first full NHL season with a team-leading 30 goals (51 points) for a franchise that ranked 23rd in goals scored. He led the Panthers with a 15.5 shooting percentage and tied Jaromir Jagr for the team lead with eight power-play goals.

Smith tallied 15 goals and 37 points this past year but is capable of scoring 25 goals and registering 70 points.

Expansion teams almost always have trouble scoring.  In part to Florida’s questionable actions, this won’t be the case with the Golden Knights.

The Minnesota Wild left their young stud defensemen Mathew Dumba and Marco Scandella exposed in the expansion draft. Wild general manager Chuck Fletcher was able to manipulate Vegas GM George McPhee into taking role player Erik Haula in exchange for laying off Dumba and Scandella. Fletcher also had to include a 2014 first-round pick in the deal, Alex Tuch.

McPhee had remarked that he was making defensemen his priority but somehow ignored two of the best defensemen available.

It is a head scratcher for sure.

McPhee had already signed Russian free agent Vadim Shipachyov, one of the KHL’s top centers. Because the Tampa Bay Lightning wanted to protect their young defenseman, the Lightning gave up the rights to one of the KHL’s best scorers, Nikita Gusev. Not only that, GM Steve Yzerman also sent over one of his 2017 second-round draft picks and a fourth-round pick next year.

It’s surprising to see former GM of the year Yzerman give up so much to protect young blueliners Slater Koekkoek and Jake Dotchin.

If Gusev and Dadonov join Shipachyov, Vegas will boast a top line of Russian snipers.

Those picks and prospects.

McPhee picked up 10 draft picks from 2017 to 2020 just to not select players teams wanted to keep. The Vegas GM used the new expansion draft rules to guarantee his team’s future.

Along with picking up the aforementioned Gusev, McPhee wrangled away young defenseman Shea Theodore by staying away from Anaheim’s Josh Manson and Sami Vatanen.

Here are the Las Vegas Golden Knights picks (and players acquired via associated trades) prior to the lifting of the full trade freeze on Thursday morning:

Look closely at the Vegas selections and you’ll see a competitive squad thanks to GM George McPhee’s solid work.