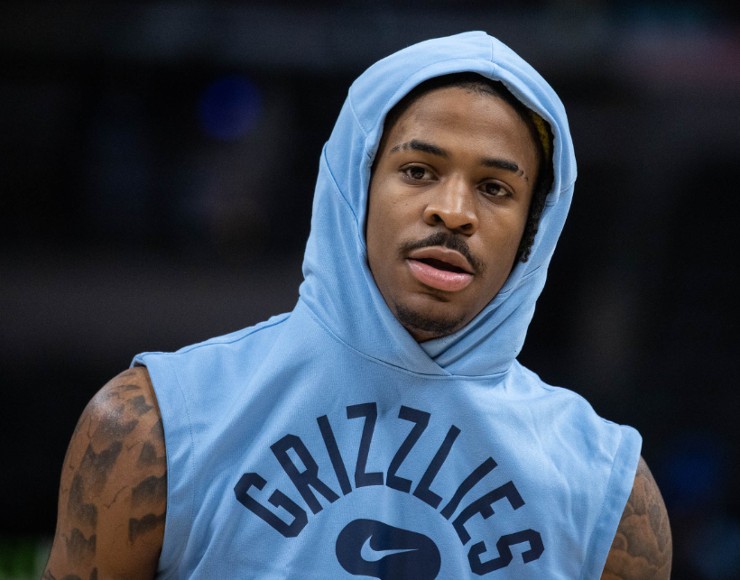 According to Grizzlies’ head coach Taylor Jenkins, guard Ja Morant is not far off from returning to the court. When asked about the current status of his third-year player, Jenkins replied, “He’s doing great. All signs are in a really good direction, but he’s definitely getting close.” On Mar. 24, Morant was ruled out for a couple of weeks after tweaking his right knee against the Hawks.

Needless to say, leading into the postseason, Morant’s absence is a problem for Memphis. Not only has the All-Star guard missed the last eight games, he was having a career season. On Dec. 29, the 22-year-old made a career-high six threes, along with putting up 41 points versus the Lakers.

Grizzlies coach Taylor Jenkins says Ja Morant is doing great and getting close. He said there’s a chance Morant can play in one of the last two games.

Furthermore, Ja Morant is the Grizzlies’ leading scorer. His impact on the court is like none other for the organization. He missed 12 games at the start of the season because of a left knee sprain as well. Athletic trainers have to offer him better tips to protect his knees when he plays.

During rehabilitation, the training staff have been carefully monitoring the guard. After seeing much-needed improvement, Jenkins increased the intensity of Morant’s workouts.

“He did 5-on-5 for the first time today, so that’s really encouraging,” stated Jenkins. “He responded well afterward, and we’ll see how he responds Friday obviously, as we go into this back-to-back back home.”

Memphis locked up the No. 2 seed in the Western Conference. Also, the Grizzlies were 18-2 at the end of March in games played without their star player this season. So, the team has found a way to win games every here and there without Morant. Though, against playoff contenders, the Grizzlies need all the help they can get.

Ja Morant is having a career season

Moreover, if the Grizzlies can win their final two home games of the regular season, the team will set a franchise record for most victories in a single season. The team plays New Orleans on Saturday. Then, the schedule ends against Boston on Sunday.

In the 2012-13 season, Memphis finished with a record of 56-26 (.683). Marc Gasol won Defensive Player of the Year back then. However, the Grizzlies were swept by the Spurs in the Western Conference Finals. Is this the year the team will advance to the NBA Finals?