[youtube https://www.youtube.com/watch?v=-f2ElJSjjSY] Thanks to the guys on the Charged Up Chargers podcast for having me on last Monday.  When we win a game like the one at KC, which hasn’t been often, I find myself in a little more demand to talk about the Chargers.  But when they Tweeted that they wanted a fan to do a guest spot on Monday, I still hadn’t come down from the game.  I figured I might as well put all that Charger thought to good use.  If you hadn’t noticed, FAITHFUL READER, this week’s title is a Rolling Stones quote.  “All Down The Line,” to be exact.  I will actually be in Pittsburgh tomorrow night (my first time back since the ’94 AFC title game) for the show.  Of course, I will also be watching the game on my phone, albeit without sound.  We’ll see how that works out for me, but if they win I’ll be happy.  I will also be AT the game against Cleveland the following week, so I think it’s a fair trade off.  I could easily spend my time here in the Halls of Justice complaining about what we did wrong at KC.  The run defense was suspect, we missed two extra points, and Herbert’s decision to throw on the goal line could have cost us the game.  And yes, Campbell did maul Kelce on the Hail Mary. 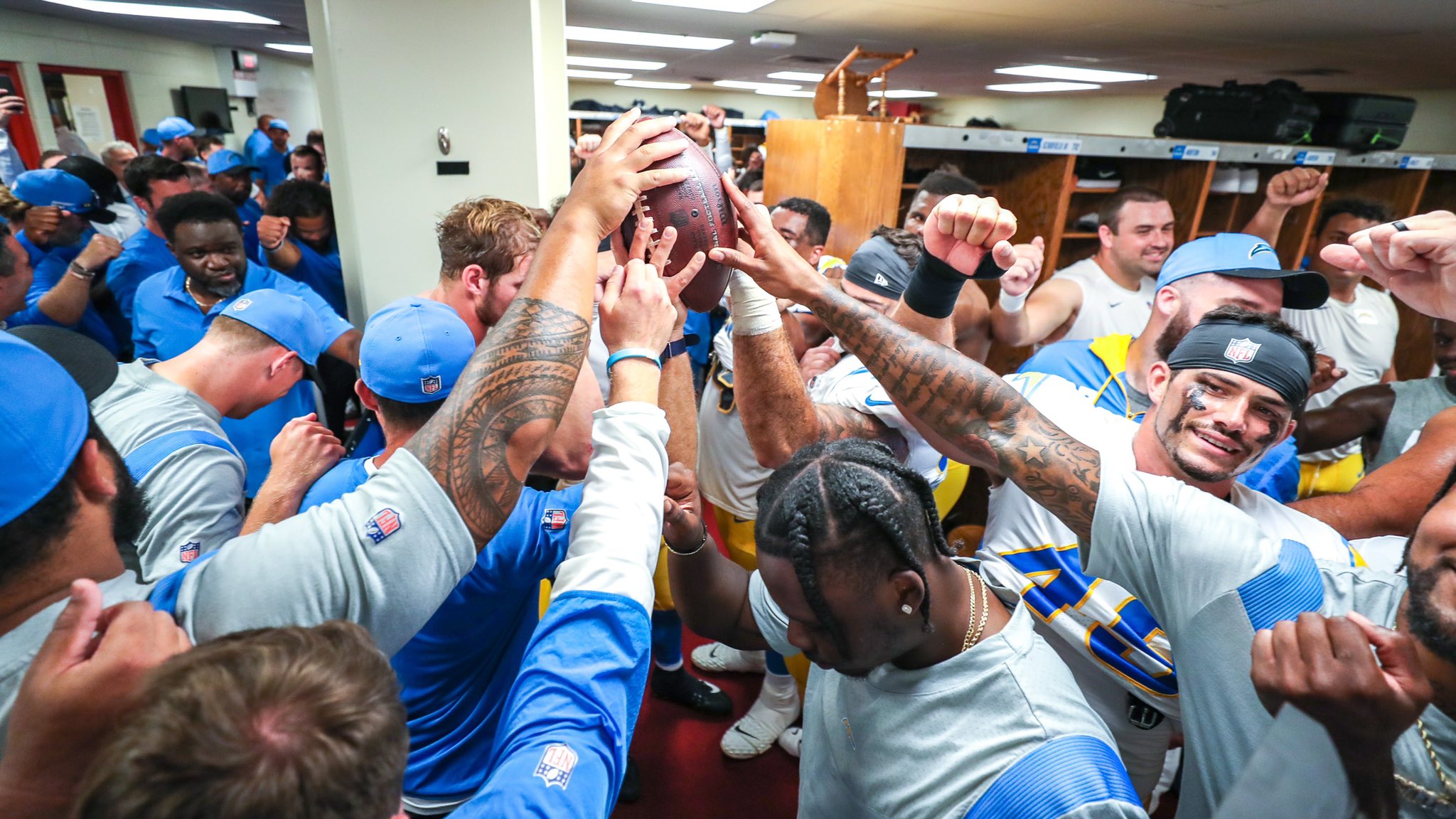 But none of those things resulted in a loss.  Instead, let’s focus on the fact that Herbert threw for 4 touchdowns and had no picks.  Once again, Staley trusted him to win the game for us and he did.  After seeing Philly fall short against the Chiefs today because they settled for field goals, the Chargers’ performance in Arrowhead remains even more impressive.  Bosa played through a sprained ankle and Derwin James popped in his shoulder during the game.  Both of those guys came up huge in the game.  Somehow, they are both not on the injury report this week.  Murray rolled his ankle and Jones’ calf will keep him out tomorrow, but they aren’t the pivotal players that Joey and Pooh Bear are.  I mentioned it on the podcast, but somehow our injuries seem to be worse when they play poorly.  The same goes for our luck in general.  That might be just a rationalization, but when things are going bad on the field it always seems like more guys are getting hurt . 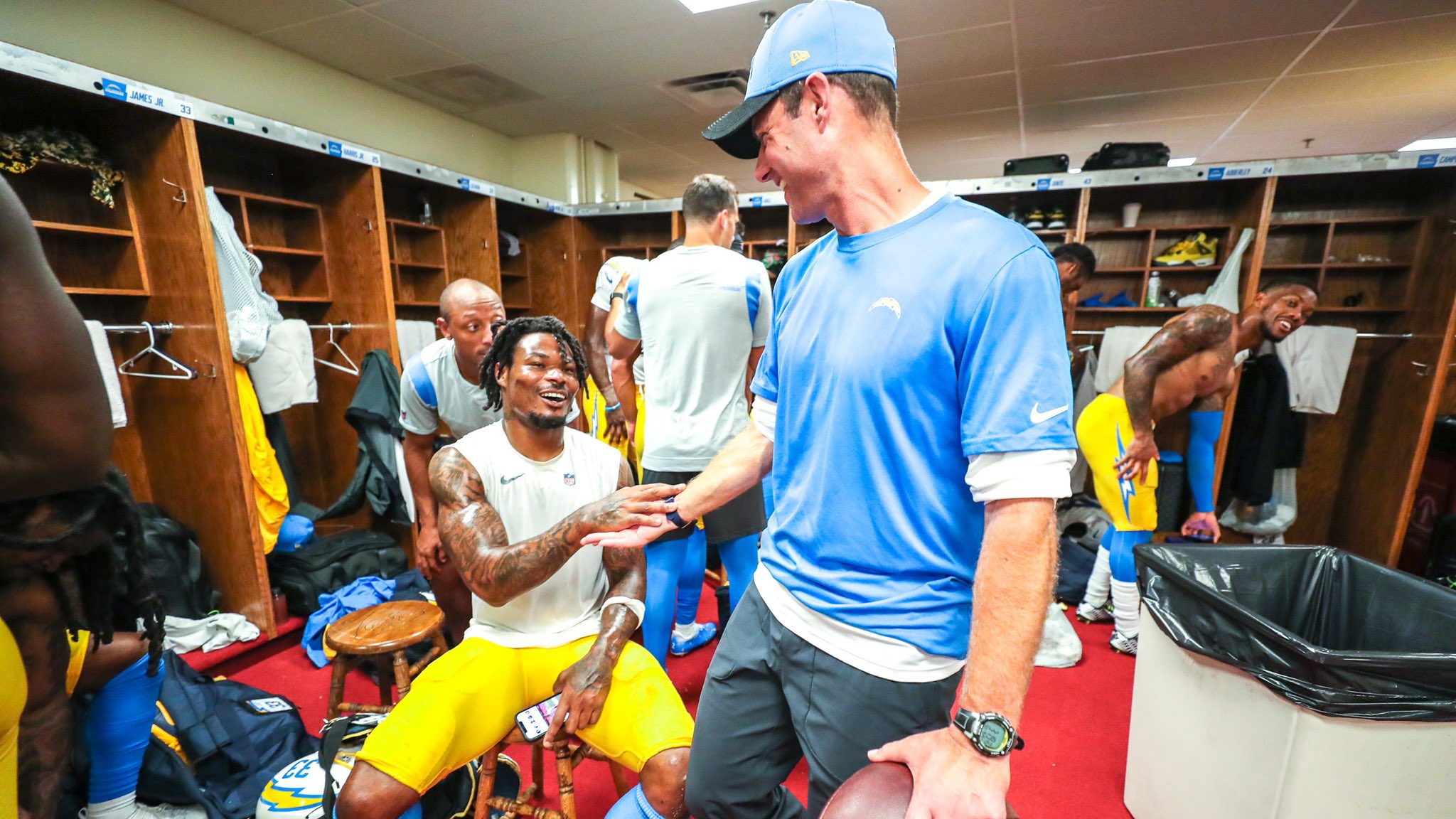 You see Chris Harris sneaking up behind Derwin.  It sounds like he’s got a real chance to play tomorrow night.  The game against the Raiders is of course huge.  As much as I hate them, and that is mostly due to their Qanon-like fan base, we know how well they have played so far.  Gus Bradley may have been a bust for us…Perryman couldn’t stay healthy…Hayward got old real quick…none of that matters tomorrow.  I truly think Staley comes up with a new plan each week, so I don’t think he’ll coach the same way he did in KC.  We can all rip on Carr and his eyeshadow and even his comments about the “Raider nation,” but I know this team is taking this game very seriously.  Yes, there will be a lot of costumed freaks there, just as there were to support the Cowboys.  That doesn’t matter.  I don’t think Gus Bradley knows shit about the offense that Lombardi has been running this year.  In fact, this article showed me how little I understood.  But the Chargers need to protect Herbert, regardless of how little Bradley blitzes.  Before Carr pulled up lame in Vegas, the defense was having a tough time with him.  Of course, that was Bradley’s defense. 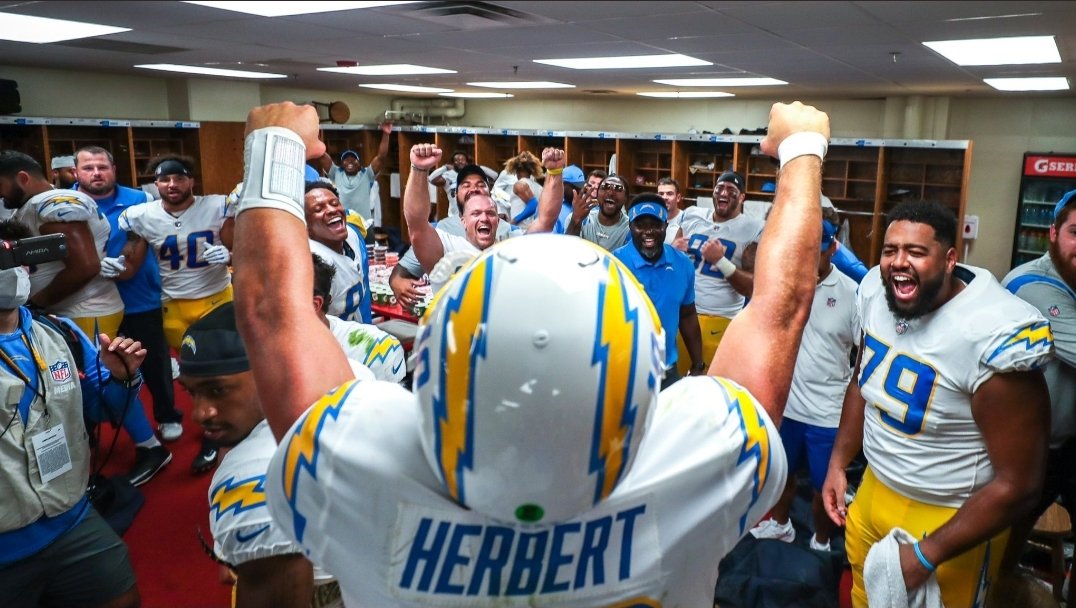 It’s not as if Herbert should have to carry us every week.  But it’s important for us to know he can.  We’ve watched opposing quarterbacks, especially in our division, drive down the field and put us away so many times.  With Herbert, we should truly believe that every game is winnable.  Carr not-so-subtly mentioned the “soccer stadium” the Chargers used to play in.  But in 2018, the team had a chip on its shoulder.  They need to come out pissed tomorrow.  Of course rival fans will be discussed.  It seems like a lot of Chargers fans are selling their tickets because they can get top dollar or because they don’t want to deal with the fights and shit.  I can’t criticize people, since I’ve never been a season ticket holder of anything.  My friend Money sent me this article last week which explains how 60-year olds from the NY suburbs became lifetime Cowboys, Dolphins, and Raiders fans.  Of course, I’m 50 and a Charger fan but it does explain why the local teams lost out on prospective fans.  They both won in OT today, but I don’t think it’s going to bring back any defectors.  It was a really interesting read, nonetheless.[youtube https://www.youtube.com/watch?v=Aib3P5-1hpw]

No, I don’t think the Stones will ever play that one live and not because of it’s non-PC title.  But I still love it.  Anyway, I could go on and on about my lifetime hatred of the Raiders.  I’ve done it in this space many times before.  I know many of you have the same type of stories.  I’m going to sign off now since I have to pack for the trip.  Tomorrow is also the two-year mark since my mom suddenly passed away.  Again, everyone has their own tales of hurt.  But they do remind us that real life is so much more important than the football team we follow.  However, it can bring joy and the moments we share that joy with our loved ones are truly special.  I can proudly say I’ve had my share of those.  So I dedicate this installment of JUSTICE IS COMING to my mom (and dad) and say I love and miss you guys every day and will still try to keep the party going without you.