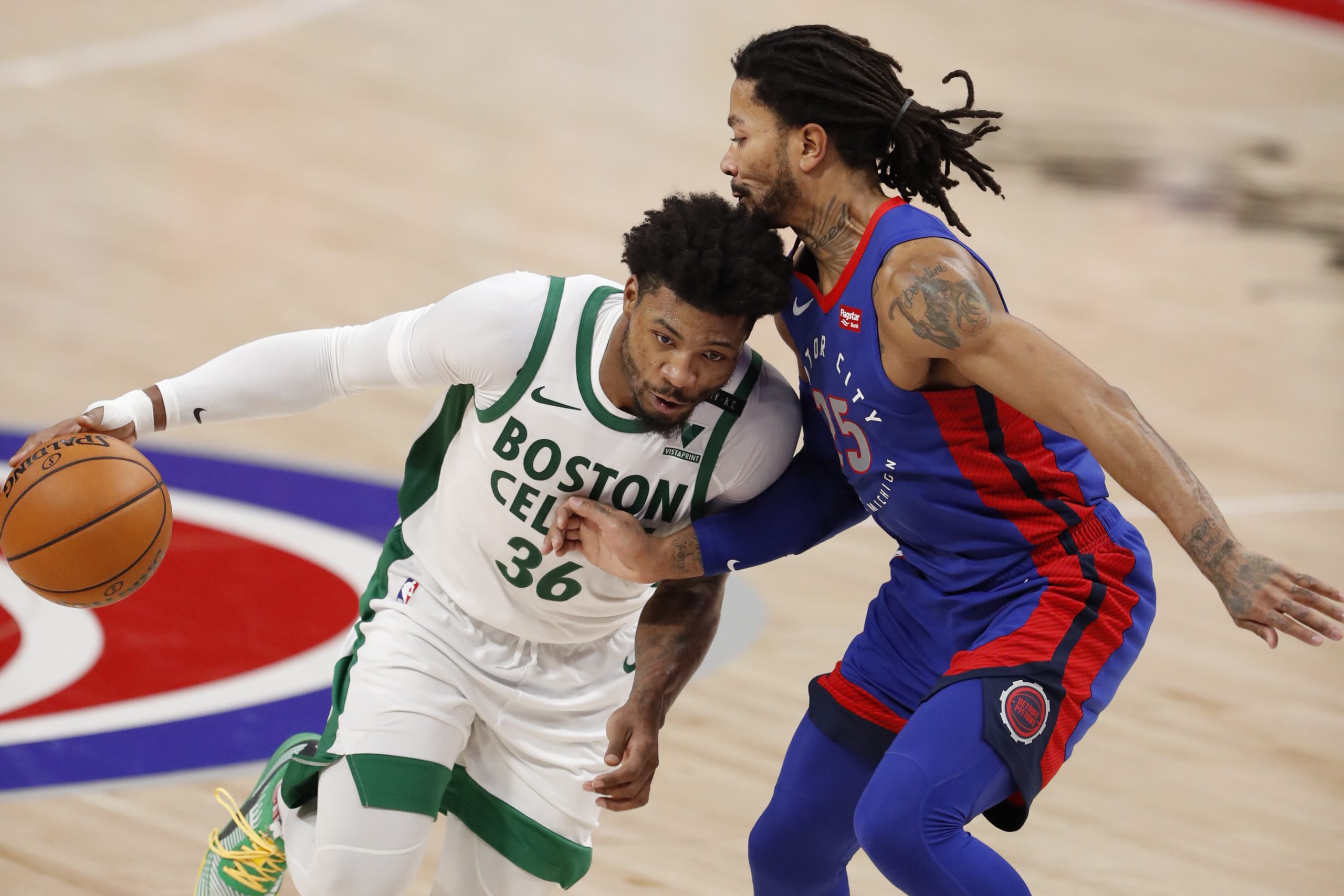 The old Marcus Smart would have shot the ball.

With less than six minutes on the clock and Boston suddenly in a two-point hole, Smart took a kick out from Payton Pritchard and squared up.

Instead of letting it fly, he up-faked. Then, after side-stepping his way back behind the 3-point line he passed up yet another opportunity to shoot, instead leaving two defenders in his wake and draining a nice, easy jumper in the middle of the lane.

It was part of a 6 point, 2 assist stretch over the final 6:31 to help the Celtics hold off the Detroit Pistons. He finished the game with 17 points and 10 assists.

“Marcus Smart is the heart and soul of this team,” Jaylen Brown said after the win. “His energy and his poise on the offensive end have been great for us. We’ve asked him to step up and play the point guard position and he’s matched that. He’s got me easy baskets, he’s gotten Jayson easy baskets and he’s gotten himself even baskets as well. I’m proud to see Marcus Smart’s growth.”

Smart’s shot selection has been a hot topic for his whole career. His early shooting struggles continue to fuel the perception that he’s not a good shooter, even though he’s opened the year shooting 41% from deep. No one is confusing him for Steph Curry, but his percentages have been just fine. What Brad Stevens challenged him to be this year is a more selective, efficient offensive player.

“I think he’s tried, I think he’s really tried,” Stevens said. “He’s trying to get us organized, he’s trying to get us in a place where everybody can be successful… he knew time and score at the end when we were talking in the huddle and when we got the ball to Jason with however many seconds left to shoot it only with enough time that they would have to heave it. And so his thoughtfulness in that moment is huge.”

Smart is obviously one of the league’s best perimeter defenders, but this year the Celtics need him running the team. His focus has to be on more than just him finding his own shot. Smart has already shown that he’s an exceptional passer, but what he’s proving is that he’s a pretty good point guard, too.

“He’s been running the team,” Jayson Tatum said. Smart’s final assist of the night came on Tatum’s game-winning shot. “Making sure that we’re in our spots and just making sure we organize and he’s been doing a really good job at it.”

Smart passed up other opportunities to shoot 3’s in the fourth quarter and each paid off with something positive for the Celtics. That’s not to say Smart is always passing up shooting opportunities, but the team needs more from him and he’s trying to deliver.

“If I’m open, I’m shooting,” Smart said. “If the guy’s closing out, I’ve gotta be able to do what I’ve been doing my whole career and that’s getting to the rim, playmaking for not just myself but for others. So that’s it, just making the read. They did a good job of closing out on me and not allowing me to get those attempts off, so I just took the easy play and took what the defense gave me.”