Maybe I Asked For Too Much 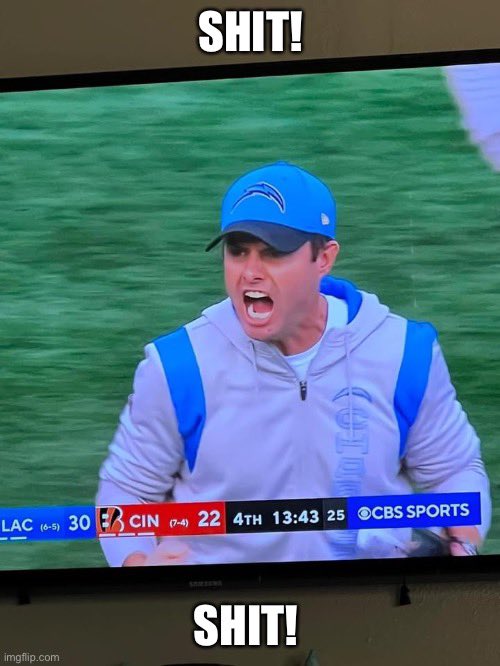 I loved how angry he got over the inability to get a two-point conversion ready after the Campbell return.  And yes, FAITHFUL READER, I am sticking with the Taylor Swift reference for the title.  We’re 2-0 when I do so.  I will absolutely admit that before the aforementioned fumble, I thought the Bolts were going full Charger.  I was ready for them to lose after jumping out to the 24-0 lead.  I have no idea what changed, but suddenly they started playing great again.  Obviously, three turnovers let the Bengals back into that game.  Ekeler almost got called with a fumble early in the game, but you could argue that his first official turnover of the day could have been overturned.  It seemed like his butt was on the ground, but when you have a habit of letting teams back into the game as we have against the Raiders and Steelers, refs are not going to give you the benefit of the doubt.  After getting both hands on what became a pick six the game before, Ekeler has not had a good stretch.  The Chargers didn’t go away from him, however.  I know a lot has been made of him wearing down this season.  No one has been able to provide any help at the #2 back position.  Jackson is brittle and Kelley can’t block.  Not sure what Roundtree is up to.  The most active he’s been is on his touchdown celebration. 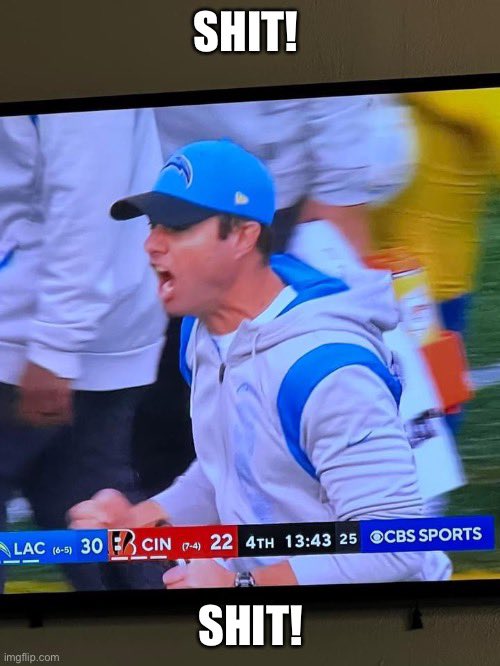 Apparently Staley has been in contact with the league about how long it takes before the clock starts on a touchdown.  The story of the game was obviously the Chargers getting four turnovers themselves.  If you had told me that Chris Harris would seal the game with a pick in the end zone, I wouldn’t have believed you.  If you had told me that he’d be a close contact for COVID the following day, I would have been more likely to buy in.

I don’t have the time or strength to talk about why Bosa, Joseph, or Mike Williams should be vaccinated.  Internet researchers will claim that I don’t care about them as people or else I would respect “their choice.”  Actually, getting a shot like you do for polio or smallpox would be an example of me caring.  You’re also talking about a contagious disease, but people who refuse to listen will refuse to listen.  I assume Keenan can play on Thursday against KC.

After everything we’ve seen, do I think we could lose at home to the Giants and end our season?  Of course.  We lost in 2014 in KC and 2005 against Miami.  We went out and won the following week after the Dolphins against a previously unbeaten team.  I spent almost the entire second half last week with that awful feeling in my stomach that said “we’re gonna blow this.”  At this point, we just have to accept that we have no effect on what happens on the field.  I don’t think Staley will let this team overlook the Giants.  I don’t trust us to be 11-point favorites against anybody, although that line may move with guys questionable.  Derwin was just added to the list with a hamstring.  I wrote last week about how surprising it is that Pooh Bear has made it this far.  I know how much Staley values him and truly believe this is precautionary.  He’s stressed all year the physical and mental preservation of our players.  Refusing to let Bosa go back into the game is a great example.  The players and scheme came to the rescue for sure, but we sure needed him.  Staley made the right call, clearly.  We always fear the worst every time anything happens to the Chargers, whether it be on the field, with injuries, or with COVID.  For me, that will always be the case.  It would take winning a Super Bowl for me not to fear the worst.  But you have just leave it up to chance at this point.  I do trust Staley even if I don’t always trust the guys on the field. 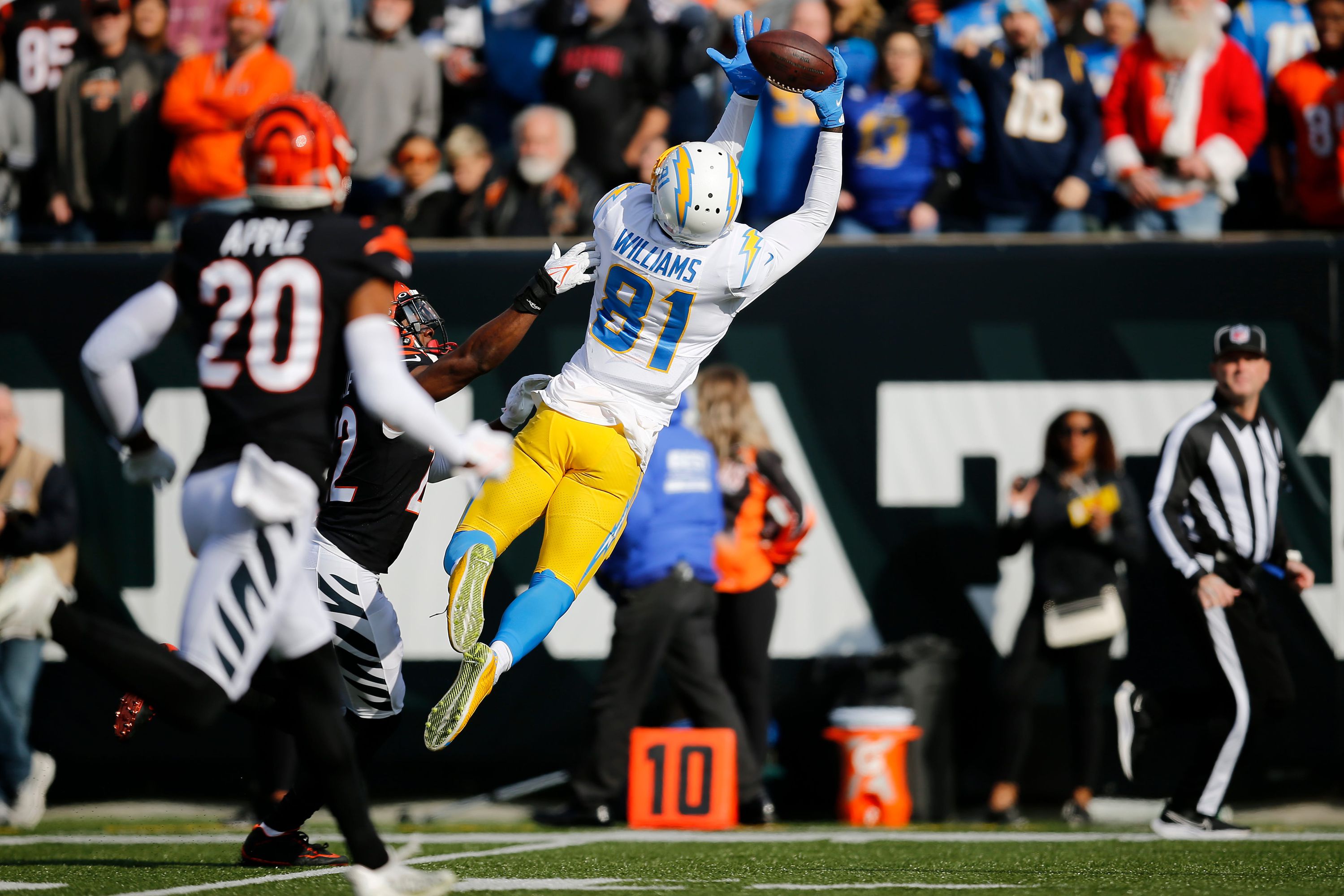 The Chargers are far from the most complete team in football.  The right side of the line will never not be a weakness.  Last week even Slater gave up a sack.  Even when Samuel comes back, which will hopefully be against KC, the secondary won’t be all that trustworthy.  Davis got beat but was able to grab the ball for an interception in the first half.  Hopkins missed an extra point, but made the kicks that mattered.  I don’t care if Money Bungler is doing OK in Indy, though I would like to see Hopkins kick better beyond the 50.  The Colts did destroy the Texans last week.  That’s what I think everyone needs to see from the Chargers tomorrow.

I honestly don’t know if the Giants are that bad.  I know that Giants fans would rather have seen Fromm start.  He’s at least part of their possible future.  I think Glennon would be easier to shut down since we at least have some tape on him.  Under Lynn we destroyed the Bills with Peterman under center.  Of course, we missed the playoffs and that very team beat us out because we went 0-4 and lost the games at Foxboro and KC that would have mattered.  I am not in any way shape or form suggesting that we can’t lose tomorrow.  That’s impossible given all that we’ve seen.  Before the New England game I said that we needed to play them like they played the Jets.  They said they needed to “take care of business” at home before playing us.  The Pats appear to be a good team, obviously, but the Chargers need to make this their “signature game” so they have an opportunity to beat KC.  A loss ends all hope and then they are the same choking squad everyone makes fun of us for. 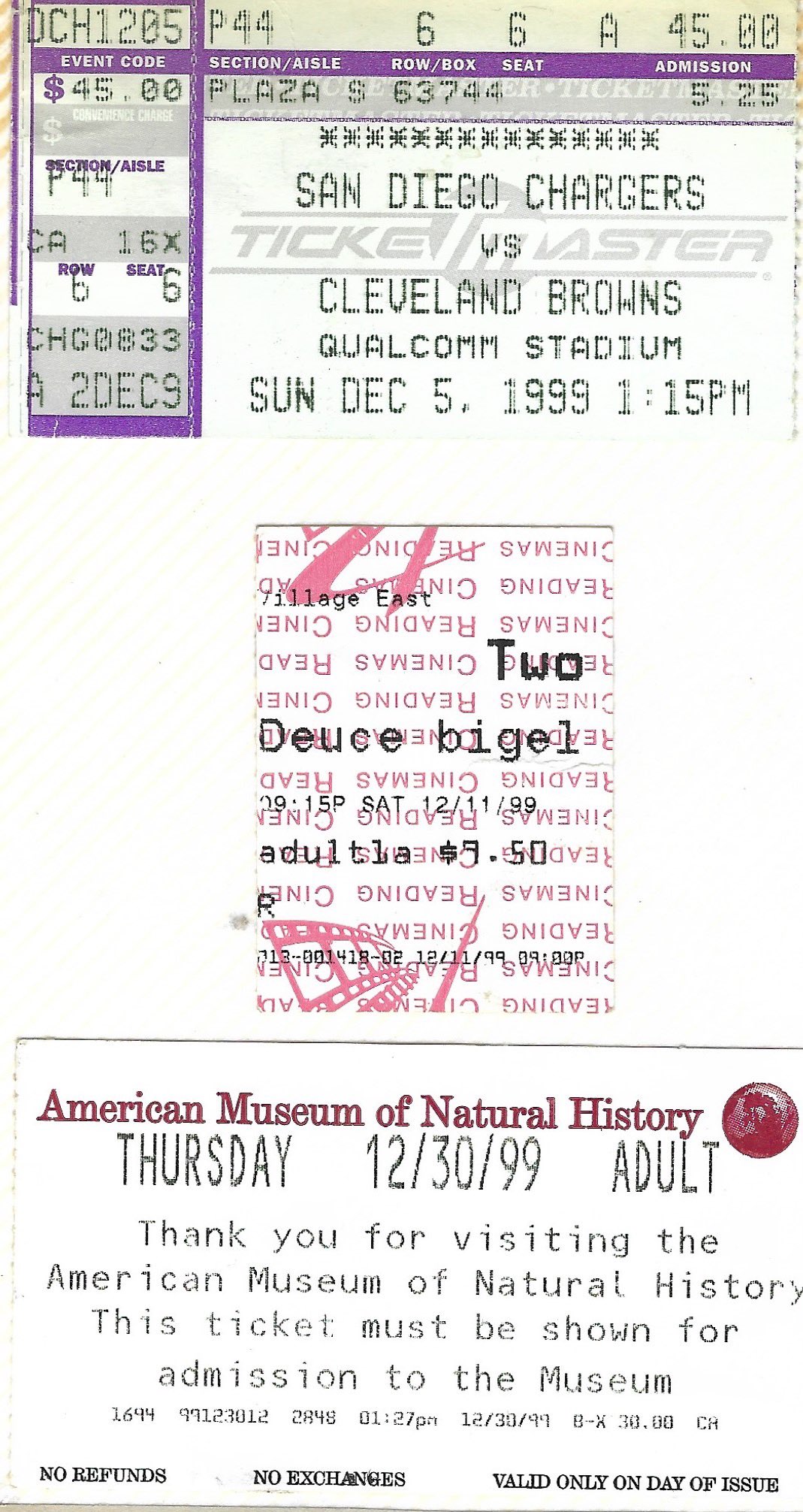 That’s all for now.  We’ll touch base mid week to talk about the demise of the 2021 Chargers or the game against KC on Thursday.  It’s just that simple.  Today is December 11, which is exactly 22 years from the night I met my wife.  Sammy had a birthday on the 3rd, but I didn’t mention it.  I thought she’d prefer I didn’t.  Add that to the things I don’t know.  But it was after the 9:15 showing of Deuce Bigelow: Male Gigolo that my life changed in the best possible way.  As you can see, I went to San Diego the week before and on a day date almost twenty days after.  By that point, the Chargers had missed the playoffs due to a missed John Carney field goal in Miami.  I watched a meaningless finale win in Denver and went on with the rest of my life.

Sammy, I couldn’t be happier.

Chargers, you’ve got some catching up to do.