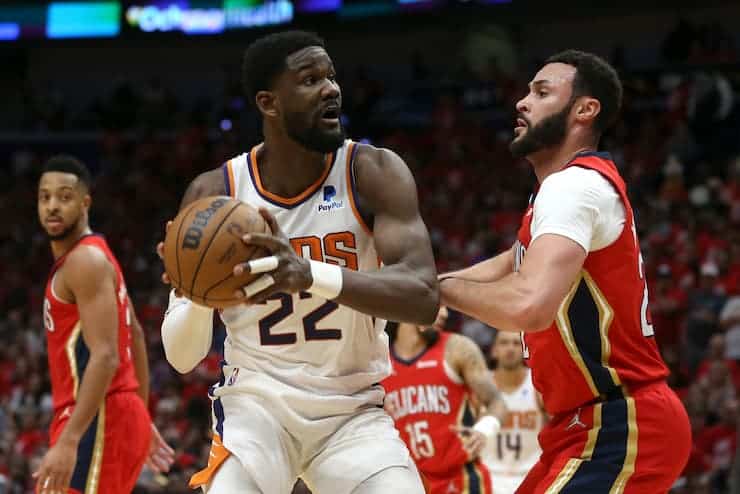 NBA free agency 2022 has already been one for the books. We are still just at the beginning and the entire landscape of the league looks different. Multiple players have already signed and/or been traded. Whether it is Kevin Durant demanding a trade from the Brooklyn Nets, the Hawks trading for Dejounte Murray, or stars such as Bradley Beal, Nikola Jokic, and Devin signing super-max deals, the news has been endless. Despite many of the top players already finding new homes, there are still a handful of quality free agents on the market. With that in mind, here are the top 10 remaining free agents as of July 2nd, 2022.

Despite a rough second-round series, there is still a good market for the former MVP. It is looking more likely that he will return to the 76ers, but nothing has been set in stone yet. He may not be the player he once was, but Harden was still an easy 20-point per game player and made the All-Star Team last season. Harden is easily the best available free agent remaining.

No one really knows what is going on between Ayton and the Suns’ front office. The Suns could easily offer him a max deal, but there is possible dissention between him and head coach, Monte Williams, as we saw in the post season. Phoenix is also the most likely to land Kevin Durant so Phoenix could be saving him in order to offer a massive package for the two-time Finals MVP. Ayton is also a restricted free agent, meaning the Suns can match whatever offer comes his way. However, all signs seem to be pointing to Phoenix letting him go for the right price. Ayton is an easy 20-10 per night player and can be an above average defender when he wants. He could benefit many teams looking to solidify their center position making him the second-most valuable free agent on the market right now.

Sexton is coming off a major injury. However, when healthy, he is one of the more explosive guards in the league. He plays more like a combo-guard with his score-first mentality, but with the right fit, Sexton could be an extremely valuable piece on a team on the brink of playoff contention. Cleveland would love to have him back to pair with Darius Garland in the backcourt, but the bidding war that may ensue may scare them away. With Sexton still young, he is going to want to get paid as he enters his prime.

One of the major trade pieces in the Dejounte Murray deal, the San Antonio Spurs bought out the small forward as they go into a full-rebuild. Gallinari is a savvy veteran who can still stretch defenses with his solid perimeter shooting. With him on the back-end of his career, look for him to sign with a contender, especially one in need of depth at the wing position.

Like Collin Sexton, Warren is also coming off an injury. When healthy though, he is one of the most valuable role players in the league. Solid 3 and D guys are becoming a must-have in today’s NBA and Warren fits that bill. He has the potential to go off for 40 as we saw in the Bubble, but would also be a valuable contributor to any team in the league. Look for Warren to ink a pretty big deal with a team who has the cap space.

Ibaka is no longer the athletic freak of nature he once was, but he is still a savvy rim-protector. Not to mention, he is still useful in screen and roll situations. Look for a contender in need of a backup big to cash in on the veteran.  A team like the 76ers would be a nice fit for the former block champion. Like Gallinari, the only offers Ibaka will most likely entertain will be ones from teams with title aspirations.

Some say Harrell’s style of play is not conducive to today’s league which puts a heavy emphasis on stretching the floor. However, an energy guy who can get offensive rebounds can be a massive momentum-shifter as well. Remember, he is just a couple seasons removed from winning Sixth Man of the Year. While he may not have the same value as he did during his Clippers days, Harrell still has a place in this league as an energy guy off the bench.

Rondo has one of, if not, the highest IQ in the entire NBA. Even if he doesn’t play much, whoever lands the veteran point guard would essentially be getting a player-coach. Many forget how valuable Rondo was during the Lakers’ championship run in the Bubble. Rondo will be a welcome asset almost anywhere he goes. If it is one a young team, he will be a solid mentor. If it is on another contender, he will be a savvy and scrappy veteran who will be ready to step up when called upon come winning time.

With the Denver Nuggets, Cousins had a bit of a re-vitalization. Even in the first-round loss to the eventual champion, Golden State Warriors, Cousins was able to provide valuable minutes off the bench. When on the floor, he also gave Denver some much-needed grit. He is no longer an All-Star, but Cousins is still valuable enough to land a backup center job on any team in the league.

Now 38 years of age, Melo’s days of being a top-50 player are behind him. Rumors are circulating about a potential reunion with the New York Knicks for his final season. However, Anthony has also proven the past couple of seasons to be a valuable bench piece who can give you a quality 10-15 minutes per night, especially on a contender. A contender could use his services off the bench, but the most likely scenario right now seems to be a return to the Big Apple for one final season.