New Browns’ Contract Could Save Deshaun Watson $15M If Suspended 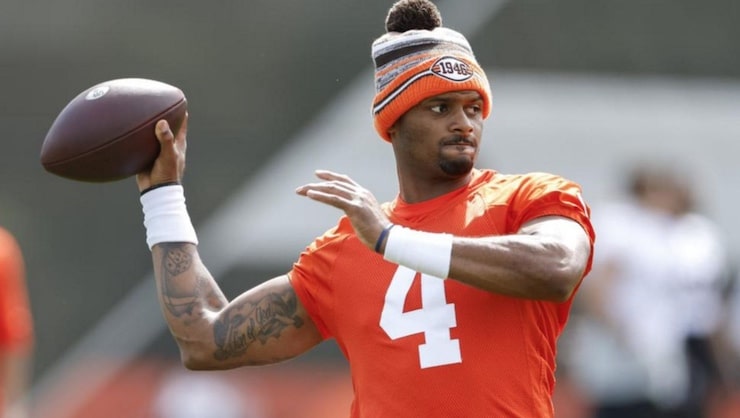 The Cleveland Browns will prepare for the start of the 2022 NFL season without franchise quarterback DeShaun Watson. The Browns’ quarterback is set to face a 2-8 game suspension stemming from his sexual harassment and assault accusations. While he faces a potential eight-game suspension, Watson is only going to lose $460,000 in fines, thanks to the Browns’ favorable contract.

After sitting out all of last year, it doesn’t look like Watson will be stepping onto the gridiron to begin the 2022-2023 NFL season.

The league is deliberating on the next steps to take with Watson after coming down hard on Calvin Ridley.

Watson has had more than 25 claims of sexual harrassment and assault made against him. While he already sat out for a full NFL season, more allegations have started to resurface.

Now, it appears increasingly likely that the NFL will take action.

According to reports, the Browns’ franchise quarterback could be facing a suspension of between two and eight games.

New Contract Will Save DeShaun Watson $15 Million If Suspended

Thanks to his new deal with the Cleveland Browns, if Watson is suspended for eight games, it will only cost the quarterback $460,000 in 2022.

That’s quite a bargain compared to the $15.5 Million penalty that he would have incurred had he stayed with the Houston Texans.

Watson’s previous contract was for 4 years, $136 million, so sitting out half the NFL season would have cost him $15.5M.

Instead, the structure of his deal with the Browns will help him save 97% of the cost of a potential eight-game suspension this year.

That’s because the Browns’ deal is set to only pay him just over $1 million in Year 1 and $46M in each year after.

After trading former No. 1 overall pick Baker Mayfield to the Carolina Panthers, the Cleveland Browns may have to go to the drawing board again without a franchise quarterback.

Entering into training camp, there are legitimate concerns about whether veteran Jacoby Brissett can keep the Browns in contention for half of a season.

Cleveland broke a 17-season playoff drought under Mayfield but after a hot start last year, the Browns struggled during the final stretch and missed the playoffs.

With the starting quarterback job essentially up for grabs, has been chatter with the possibility of adding Josh Rosen to the roster ahead of Week 1.

According to BetOnline, the Browns enter the season with a 2.78% chance of winning Super Bowl 2023.

Breaking Down DeShaun Watson’s Contract with the Cleveland Browns

Most NFL teams were aware about the risks that they would take when acquiring Watson and the fact that he would be suspended for part of the 2022-2023 season.

While Watson was almost traded to the Atlanta Falcons, he signed with the Browns, who had a more favorable deal to the superstar quarterback.

However, he ultimately agreed to go to Cleveland, in part because of the way that the organization agreed to structure his deal.

The Browns agreed to pay the vast majority of Watson’s deal in Years 2-5 with his base salary only $1.035 Million in Year 1. This helped minimize the financial impact of a potential suspension on Watson, which is now projected at only $460k in the event of an eight-game suspension.

The Browns won’t be able to recoup the signing bonus and no futures guarantees will be voided but Watson will still lose game checks for any games that he misses due to suspension.