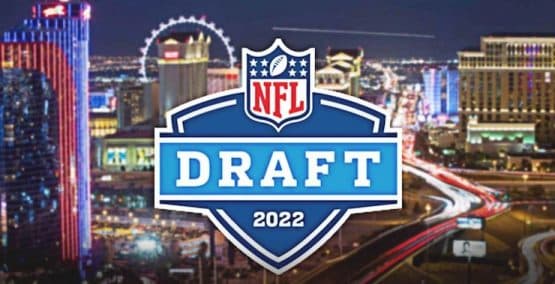 Welcome to our 2022 NFL Draft live coverage article! We will be providing live updates and analyses throughout the first round.

The best sports betting sites are giving away free bets and sports betting offers for the 2022 NFL Draft. With up to $6,375 in free bonus cash up for grabs, football fans can cash in on NFL Draft day.

Check out the best NFL Draft betting offers below.

The draft, which starts at 8 pm on Thursday, April 28th, is set to begin shortly.

Check our live coverage, updates, and reactions for each pick in the NFL Draft First Round.

The Jags took Walker here, a hit or miss pick that can add value as a run-stopper but has almost no current ability as a pass-rusher. Bad move.

A great pick here for the Lions, taking advantage of the Jaguars missing with the first pick and picking the sure-fire great player that is Hutchinson.

The Texans take the most-sound corner in this draft. He hits all of the fundamental boxes, allowing them to add a great piece to the back of their defense.

The Jets take the playmaking corner here at 4. They probably would’ve gone Stingley if he wasn’t available. Robert Saleh needs this corner to help out his defense.

The Giants shoot for the stars here, hoping to land on the moon. Many thought they would go OL, but they couldn’t turn down this talent.

The Panthers take the most versatile OL in this draft as they address their horrendous play from last season.

Neal played a lot of spots along the offensive-line throughout his college career (including RT), so he’s the perfect pick here to protect Danny Dimes.

London is just phenomenal in contested situations, making him a quarterback’s best friend. No matter who their QB is going forward, they needed to give him a WR.

Cross is the third of the top 3 tackles in this draft to come off the board. They desperately needed it, and based on how this draft is going, they could still take a QB.

The Jets addressed defense at 4, and now they take a WR to help Zach Wilson. Wilson (Garrett) has a great catch radius and is an all-around phenomenal talent.

The Saints seemed to feel the need to trade up for Olave, a speedster that can play in the slot between Callaway and Thomas.

It is unclear as to why the Lions traded up so much just to get a WR, even if he is a great one. I guess we will find out what their plan is soon.

The Eagles jumped up two spots to take the playmaking albeit two-down DT to improve the middle of their defense.

The Ravens just go with the best talent available, as an upgrade anywhere on defense was much needed in Baltimore.

The Texans address their offensive-line here with the best proper guard in the draft. Simply addressing a need.

Dotson is the most polished WR in the draft class and a great pick here for the Commanders. Regardless of their QB situation in the near future, that guy will have great WRs to throw to.

Johnson moved around the offensive-line a bit, and though he has some struggles, the Chargers are taking a much-needed shot at protecting Justin Herbert.

The Titans receive the 18th and 101st pick for AJ Brown.

Burks is a WR version of Kyle Pitts. He’s a versatile player who is good in space- a perfect fit for this PA-boot system.

Whether Penning or Raimann was the better tackle left on the board is team-dependent. There is a reason why these guys weren’t around the top 10, but he is a strong player.

Simply put, Pickett is the most pro-ready QB in this draft class and the only QB that will definitely be competitive in the NFL.

McDuffie played a lot of zone in college and can be a great piece for this defense. A bit of surprise pick, but much needed talent on the back-end.

Walker is good against the run but has a poor feel for zone. Not just a bad pick that has Rodgers reaching for tequila, but a bad pick.

The Ravens traded Hollywood Brown and the 100th pick for this pick from the Cardinals.

Elam can over-rely on his help sometimes, but he knows where his help is and can get handsy and physical. A great corner here opposite Tre’Davious White.

Smith has late hands, boom or bust power, and is prone to penalties. Suffice it to say that I think Raimann would’ve been a better choice.

The Ravens can now move Mekari to guard and have a long-term answer at center. A great pick to help the offense execute.

The Jets add a great edge rusher here, though sometimes he freezes and is essentially out of the play. However, when he is in the flow state, he is a beast.

Lloyd is a top 10 talent in any draft. STEAL. The full package at any LB spot.

A lean guy with bad hands and poor play on the move, the Patriots add a thinker here.

Hill’s muscles clearly work differently, making him move across the field in a unique way. I don’t think that plays into his favor.

Sine could fill a safety spot or move to the nickel corner, adding a nice piece to the Vikings secondary.