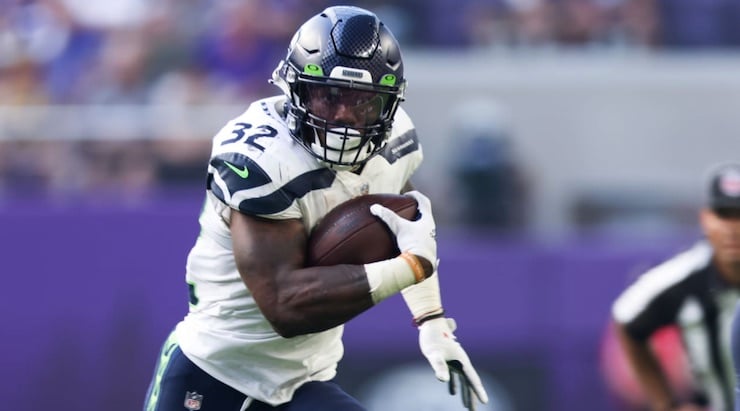 Chris Carson, a Seattle Seahawks’ running back, retired from the NFL after five seasons due to a serious neck injury on Tuesday.

Carson suffered a neck injury early last season and had to undergo fusion surgery on his neck. Seattle released him after he failed his physical, allowing him to collect millions in injury protection benefits, according to NFL insider Ian Rapoport.

While the outcome may not be surprising, Carson has not officially decided to hang it up, just in case his neck makes a dramatic improvement.

#Seahawks star RB Chris Carson is retiring from the NFL due to a neck injury, sources say.

SEA will officially release him with a failed physical designation. Under the CBA, that allows Carson to receive several million in injury protection benefits. Seattle does right by him.

One of the biggest impact players left on the Seattle Seahawks, Chris Carson will retire from the NFL after suffering a career ending neck injury last season.

The Seahawks released the running back after failing his physical, which will allow him to recoup some funds in his contract and continue his recovery.

Many fans and teammates took to Twitter to share the news, well wishes and of course, their favorite Chris Carson highlight reels.

Check out some of Twitter’s top reactions to the Seahawks running back’s retirement.

Chris Carson is a Seahawks legend. So good, unfortunately, injuries ended his career. Officially retired today, but we thank you for your time in Seattle! pic.twitter.com/Fpm6crHsz3

Memories. You were always a Winner. You will keep winning in whatever is next. Love you bro. #ChrisCarson pic.twitter.com/W1grjQKJlW

Chris Carson was a beast and I hope he has a happy and healthy retirement. I will never forget when he flipped over this guy. pic.twitter.com/JNzFE1vNOz

Since we are all sharing some Chris Carson highlights – this was one of my favorites! One of those moments you jump off the couch and are screaming, “OHHHHHHH Damnnnn! What did he just do?! Let’s see that again!” #Seahawks #GoHawks

Chris Carson will likely be forced to retire from football after five NFL seasons due to a neck injury that he sustained last season.

He suffered a neck injury in Week 4 against the San Francisco 49ers on October 3, 2021 and was placed on injury reserve for the rest of the season.

It wasn’t until later on Tuesday that the Seahawks released Carson with a failed physical designation, which allows the running back to receive injury protection benefits.

A fan-favorite for his overall work ethic and running style, Carson was a seventh-round draft pick out of Oklahoma State before earning the starting job in the Seahawks’ backfield.

At the young age of 27, Carson had only been in the league for five years before suffering a career-ending injury.

Carson was Seattle’s starter in all five seasons. He beat out more highly-touted running backs like Eddie Lacy as a rookie and the Seahawks first-round pick the following year, Rashaad Penny.

He was the first Seahawks back to post consecutive seasons of at least 1,000 rushing yards since Marshawn Lynch in 2013-2014.

Chris Carson will walk away from the game of football with $9.4M in career earnings, not bad for a seventh-round pick.

However, he did miss out on a payday as a result of his injury.

Carson was slated to earn $4.6M in 2022 but will see some of that cash per an injury settlement after the Seahawks terminated his contract due to a failed physical.