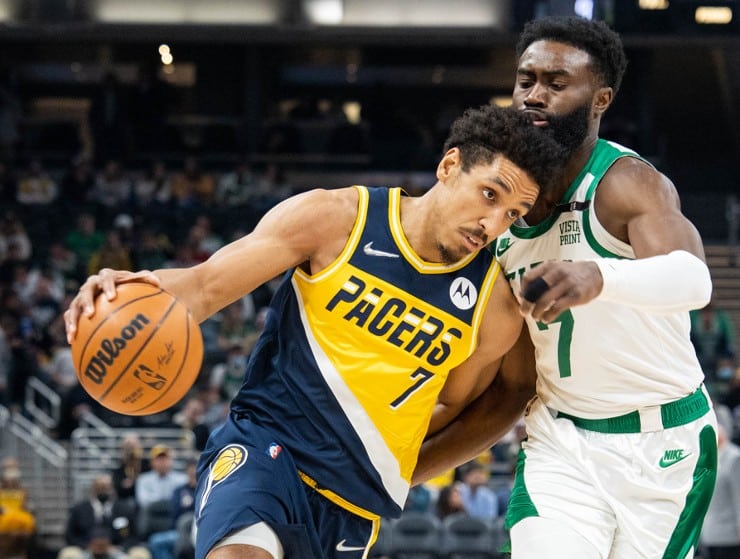 The Pacers are trading Malcolm Brogdon to the Celtics for Daniel Theis, Aaron Nesmith and a 2023 first-round draft pick. According to ESPN’s Adrian Wojnarowski, the Celtics front office are also packaging Nik Stauskas, Malik Fitts and Juwan Morgan together in this trade as well.

Celtics G.M. Brad Stevens decided to add Malcolm Brogdon to his team’s already dominant defense. Now, not only does Boston have another top defender, but the team also has one more offensive playmaker. Even if this trade appears to benefit the C’s more, make no mistake, this is a solid trade for both teams.

In the 2021-22 NBA regular season, Brogdon averaged 19.1 points, 5.1 rebounds and 5.9 assists per game in a total of 36 games played. Also, he shot 44.8% from the field. The only downside to this trade for Boston is Brogdon’s health status. The guard missed over 40 games last season due to an Achilles injury.

Celtics trade Daniel Theis and Aaron Nesmith to the Pacers

Meanwhile, Daniel Theis has had more success playing European basketball. He is a three-time German League champion and four-time German League All-Star. But the center is great for adding depth to a team’s roster. In the Celtics’ 127-117 win over the Timberwolves on Feb. 21, 2020, Theis scored a career-high 25 points, in addition to finishing with 16 rebounds.

Last season, Theis averaged 8.2 points, 4.9 rebounds and almost 1.0 assist per game with the Rockets and Celtics. On Feb. 10, the Rockets traded him to the Celtics for Bruno Fernando, Enes Freedom and Dennis Schroder. He is projected to make $8,694,369 next season. He is guaranteed a total of $17,802,755 over the next few years.

As for Aaron Nesmith, the forward was selected 14th overall by the Celtics in the 2020 NBA Draft. In the 2021-22 season, Nesmith averaged 3.8 points and 1.7 rebounds per game in 52 games played. While he has yet to discover his offensive identity in the NBA, the forward is only 22 years old.

And Nesmith appeared in the 2021 Summer League. During the competition, he averaged 17.4 points, 6.2 rebounds and 1.2 assists per game. The forward ranked 22nd overall in scoring. It will only benefit his professional playing career moving forward if he decides to play in this year’s Summer League. Other articles related to the Celtics’ trade for Malcolm Brogdon are on the main page.