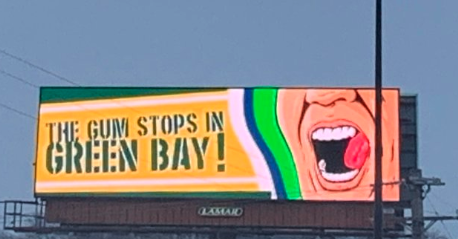 The Packers and Seahawks are preparing for what should be an epic showdown in Lambeau Field on Sunday, in a game that oddsmakers believe will be the closest of NFL Divisional Weekend.

Green Bay is only a four-point favorite over Seattle in Sunday’s game, which is essentially just factors in home-field advantage. If these two teams were to meet on a neutral field, oddsmakers apparently believe it would be a completely even matchup.

Packers fans are already doing whatever they can to give their team an advantage, and a group of them even put up a billboard, mocking Seahawks head coach Pete Carroll for his incessant gum chewing.