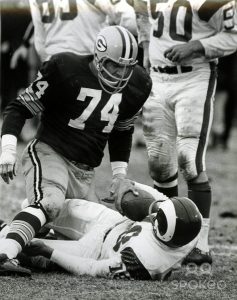 The Packers road to their third straight championship in 1967 started with a playoff game against the Los Angeles Rams at Milwaukee County Stadium. Vince Lombardi’s Packers entered the game with a 9-4-1 record and had dropped their last two contests after clinching their division title. Meanwhile, the Rams, coached by Hall of Famer George Allen, finished the season with an 11-1-2 record and were on a 10-game winning streak.

The Rams were led by quarterback Roman Gabriel and a fierce defense headed by one of the greatest defensive lines of all time. Merlin Olsen, Lamar Lundy, Roger Brown and Deacon Jones were dubbed “The Fearsome Foursome” and spent the season decimating opposing quarterbacks. The Rams were a powerhouse and led the league with the most points scored (398 in 14 games) and the fewest points allowed (196).

The 1967 Packers were an aging group of veterans hoping to win an unprecedented third straight championship despite an injury-plagued season. Bart Starr was banged up for most of the season. While he missed only two games, he played through some tough injuries and threw only nine touchdown passes and an uncharacteristic 17 interceptions.

Both Hall of Fame running backs Jim Taylor and Paul Hornung left the team before the season started and injuries decimated the position over the course of the campaign. Both Elijah Pitts and Jim Grabowski missed almost half the season. The Pack was forced to rely on backups like Ben Wilson, rookie Travis Williams and newly signed journeyman Chuck Mercein to compliment Donny Anderson at the position.

Few people expected the Packers to beat the Rams. In fact, a fan poll in the Green Bay Press-Gazette during the week leading up to the game showed that most local fans had picked the visitors to end the Packers title defense. It angered a proud group of veterans. “They had picked us to lose,” linebacker Dave Robinson recalled. “These were out local people. Our slogan in our meeting was ‘How can they expect to be a lion in the lion’s den?’”

Lombardi also found a dramatic way to motivate his players. Before the game, he gave one of his most famous pregame speeches. Hall of Fame guard Jerry Kramer remembered it well. “He gave us this wonderful speech of St. Paul’s epistle, about when all the runners are running the race, only one can win, and we run, not just to be in the race, but we run to win. That got us pumped up pretty good.”

Despite the inspiration, it was the Rams who got off to an early lead. The Packers turned the ball over and Gabriel made it 7-0 Los Angeles on a 29-yard touchdown pass to Bernie Casey.

The Rams put together another drive and tried a field goal, but Robinson blocked the kick and the game’s momentum turned.

Rookie RB Travis Williams was pressed into a starting role due to injury. He was nicknamed “The Roadrunner” for his speed and like many of Lombardi’s veterans, he came through with a pair of touchdowns. The first was a 46-yard dash in the second quarter that tied the game at 7-7.

Kramer recalled the play. “I remember blocking Merlin Olsen and he was starting to slip away to the outside in pursuit and I look outside, and Travis was about even with us, but near the sideline running towards the end zone. And I knew the play was over. He’s gone.”

Starr found wide receiver Carroll Dale for a 17-yard touchdown to give the Pack a 14-7 halftime lead. Dale finished the game with six catches for 109 yards while Starr was an impressive 17-of-23 for 222 yards and a touchdown. Williams led all rushers with 88 yards on 18 carries and a pair of scores.

Defensively, the proud veteran Packers defenders harassed Gabriel for the rest of the contest. They sacked the Rams quarterback five times including 3.5 by future Hall of Famer Henry Jordan.

In the second half, the Packers scored twice more. Mercein ran one in from six yards out in the third quarter to give the Packers a 21-7 lead and Williams scored the final touchdown of the game in the fourth quarter to put the game out of reach for the Rams.

Lombardi was thrilled with his club’s performance. “We were magnificent today,” he said after the game. “We rose to the occasion. A lot of people said the Packers were dead, but we still have a great nucleus.”

One week later, that nucleus played the biggest game in the franchise’s history when they defeated the Dallas Cowboys in the “Ice Bowl.” But none of that would have happened if Lombardi and his wily veterans hadn’t played better than anybody thought they could to defeat an outstanding Rams team against all odds.

In his book, “Instant Replay,” Kramer summed up what the win over the Rams meant to him at the time.

“I was misty-eyed myself I felt so good. I felt so proud, proud of myself and proud of my teammates and proud of my coaches. I felt like I was part of something special. I guess it’s the way a group of scientists feel when they make a big breakthrough, though, of course, we aren’t that important. It’s a feeling of being together, completely together, a singleness of purpose, accomplishing something that is very difficult to accomplish, accomplishing something that a lot of people thought you couldn’t accomplish. It sent a beautiful shiver up my back.”