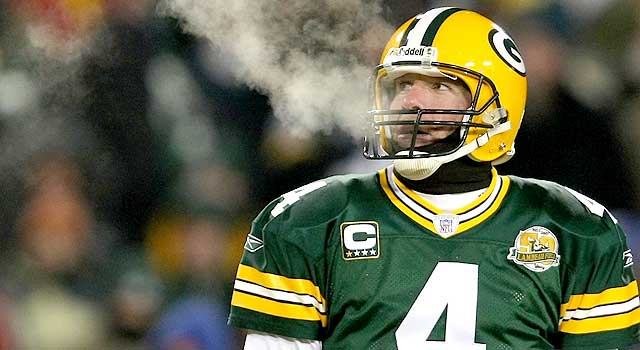 As we reach mid-December, it’s time to reflect on some of the coldest games played on “The Frozen Tundra” of Green Bay. The Packers are famous for playing in the cold at Lambeau Field (and formerly in Milwaukee) and the frigid weather often gives the Pack a distinct advantage, especially when playing warm-weather opponents or teams that play their home games in a dome.

Here is a look back at the six coldest home games in Packers history:

The Packers played their first championship game at Lambeau Field in 29 years when they faced the Panthers in the 1996 NFC title game.

The atmosphere at Lambeau Field was electric as Packers fans awaited their first trip to the Super Bowl since the Lombardi Era.

The Packers fell behind early after Brett Favre was intercepted by Sam Mills, but they came back to win the game convincingly 30-13.

Favre threw for 292 yards and a pair of touchdowns including an incredible leaping touchdown grab by running back Dorsey Levens in the second quarter that tied the score.

The Packers defense clamped down in the second half and held Carolina to just 206 total yards and 12 first downs for the entire game.

The Packers advanced to the Super Bowl where they defeated the New England Patriots 35-21 to win their first championship in nearly three decades.

The Packers had a rough season in 1990 and were unable to follow up on their 10-6 record of the previous campaign. The quarterback position was a problem throughout the year with starter Don Majkowski first holding out and then getting hurt. Backup Anthony Dilweg was also injured so the Packers turned to third-string quarterback Blair Kiel in this game.

Kiel got the Pack off to a strong start, running for a three-yard touchdown to give the Pack an early 7-0 lead. Former first-round pick Darrell Thompson ran back the second half kickoff 76-yards for a touchdown. The Packers led 17-10 entering the third quarter, but they couldn’t hold on.

Lions cornerback Ray Crockett returned a fumble 22 yards for a touchdown that tied the game at 17-17 and then Barry Sanders scored on a six-yard run with 3:37 left in the game to give Detroit a lead.

The Packers started a potential game-tying drive, but Kiel was picked off by Crockett at the Lions 14 with just 1:51 left to ice the win for the Lions.

The Packers couldn’t stop Sanders, who ran for 133 yards on 19 carries. Kiel finished 20-of-36 for 239 yards while tight end Ed West led the Packers with seven catches for 103 yards.

The Packers finished the season a disappointing 6-10-0 under head coach Lindy Infante after losing their final five games of the season.

The Packers and Bears met in the frigid cold of Lambeau Field and neither team had much offense. The Packers were without starting quarterback Lynn Dickey, who was injured, so they turned to backup Carlos Brown. The second-year quarterback was making only his second NFL start and he struggled, completing just 5-of-17 passes for 125 yards and two interceptions.

The Bears led 10-0 in the first quarter after a Bob Thomas field goal and a 49-yard pass from Bob Avellini to James Scott but the Packers answered back. After a second quarter field goal by Chester Marcol, Brown found wide receiver Ken Payne for an 11-yard touchdown pass in the third quarter and the game was all even at 10-10.

The Packers offense struggled to move the football, especially on the ground. Brown was their leading rusher with 22 yards on four carries. John Brockington gained 15 yards in 13 carries and Eric Torkelson had 19 yards in eight attempts. The Bears had Walter Payton who gained 110 yards on 27 carries. Ollie Smith had a productive game for the Packers, gaining 121 yards on four catches including a 47-yard connection with Brown.

The Bears took the lead 16-10 on two more Thomas field goals. Coach Bart Starr replaced Brown with veteran Randy Johnson and he led the Pack downfield for the potential winning score, but the last ditch drive stalled at the Chicago 39 in the final minute and Chicago hung on for the win.

By the way, Carlos Brown played in only one more game in the NFL after this, but he went on to a prominent acting career under the name Alan Autry. He is best known for starring opposite Carroll O’Connor in the show “The Heat of the Night” and later became mayor of Fresno, California.

This cold, wind-swept day at Lambeau Field was historical for several reasons, the least of which was the zero degree temperature at kickoff.

The Packers clinched their first playoff berth in 11 years and their first in a non-strike season in 21 years with a convincing 28-0 win over the Los Angeles Raiders.

Brett Favre threw for 190 yards in the cold and threw a touchdown pass to Sterling Sharpe while running back Darrell Thompson ran for 101 yards including a 60-yard touchdown dash in the fourth quarter that rounded out the scoring. Sharpe had a good day as well, catching seven passes for 119 yards and a touchdown.

But this game is also famous for the invention of the Lambeau Leap. Reggie White recovered a Raiders fumble and lateraled to LeRoy Butler who ran it back 25 yards for a touchdown that gave the Packers a 21-0 lead in the fourth quarter.

After scoring, Butler leaped into the first row of the stands in the end zone and the Lambeau Leap was born. “I know a lot of people say, ‘Well, act like you’ve been there before,’” Butler said in 2015. “I’m a defensive guy. I may not ever get back there again. So, I was going to make the most of it.”

Butler did manage two more regular-season touchdowns in his NFL career, but his actions started a tradition at Lambeau Field that continues to this day and has become an indelible part of the fan experience at Packers games.

The Packers hosted the NFC Championship Game for the first time in 11 years as they faced the upstart New York Giants with a Super Bowl bid on the line.

Unfortunately, the cold temperatures that included a wind chill of minus-23 ended up hurting the home team more than the visitors.

The Packers gained only 264 total yards in this game and 90 of them came on one play, a bomb from Favre to Donald Driver that gave the Pack a 7-6 lead early in the second quarter.

In what would be his final game in a Packers uniform, Favre completed 19-of-35 passes for 236 yards and two touchdowns despite the horrible weather conditions.

Mason Crosby’s 37-yard field goal in the fourth quarter tied the game. The Giants had a chance to win it on the final play of regulation but Lawrence Tines missed a 36-yard field goal because of a bad snap and the game headed to overtime.

The Packers won the toss in overtime and started with the ball but on the second play from scrimmage, Favre was intercepted by Corey Webster who returned the ball to the Green Bay 34. Three plays later, Tines booted a 47-yard field goal and the game was over.

Favre announced his retirement shortly after the season but then unretired again during training camp. The Packers then traded him to the New York Jets and committed themselves to Aaron Rodgers at quarterback.

If there was one game that captured the greatness of Vince Lombardi’s Packers, this was it. The game-time temperature was minus-13 degrees with wind chills as low as minus-48. The Packers were looking to win their third straight NFL title, something no team had accomplished in the NFL since a championship game was introduced in 1933. It was so cold that the referees couldn’t use their whistles because they would stick to their lips.

The Packers went on top early on a pair of touchdown passes from Bart Starr to Boyd Dowler, but the Cowboys chipped away at that lead when defensive end George Andrie recovered a Starr fumble and ran it in for a seven-yard touchdown. A Danny Villanueva field goal pulled Dallas to within 14-10 at the half.

In the second half, the Cowboys defense shut down the Green Bay offense. Dallas took the lead early in the fourth quarter on a 50-yard halfback option pass by from Dan Reeves to Lance Rentzel. The Packers trailed 17-14 and time was running out on the Packers dreams of a third straight championship.

The Packers got the ball back at their own 32 with just 4:50 left in the fourth quarter. Starr utilized short passes to running backs Donny Anderson and Chuck Mercein to move the ball down the field. Three running plays by Anderson failed to get the ball across the goal line as Anderson slipped on the icy turf twice.

Starr called his final timeout with 16 seconds left on the clock. The Packers called a wedge play with guard Jerry Kramer and center Ken Bowman teaming up to block Dallas defensive tackle Jethro Pugh. Starr kept the ball himself and snuck into the end zone behind the block by Kramer and Bowman and the Packers had won their third straight title, something no other team has done before or since.

The aging Packers overcame the elements, a legendary Dallas defense and the odds to win a third straight NFL title. This win gave the Packers an accomplishment that has never been matched and made Lombardi’s teams the stuff of legend.