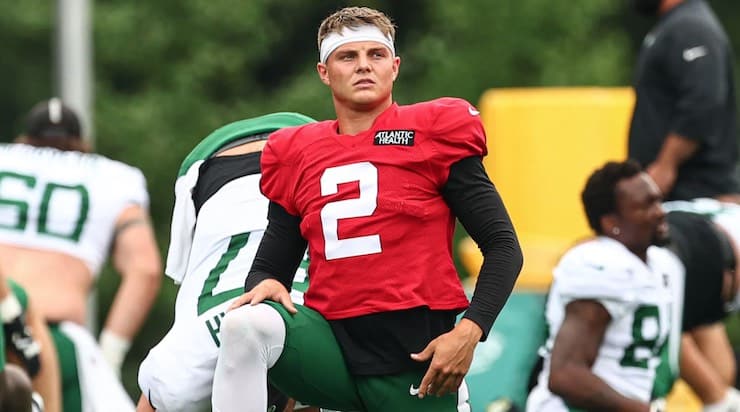 After reports surfaced that he was being outplayed by veteran Joe Flacco, the second-year quarterback had his best day at Jets’ training camp on his 23rd birthday.

Wilson led several touchdown drives on the day, including a score on a drive-the-field drill that started at his own 10-yard line.

He started his first drive 8-for-8, finishing it off with a touchdown to Ty Conklin and a two-point conversion to Elijah Moore.

Read on to find out more about Wilson’s performance at Jets’ training camp on Wednesday.

While there had been reports that Flacco had been outperforming him in the early part of camp, Wilson was already starting to show signs of the potential that made him the No. 2 overall pick.

Check out this amazing throw he made while on the run during Tuesday’s session.

The Jets’ franchise quarterback used that throw to build some confidence, which he clearly rode into Wednesday’s session.

Check out some of the top Twitter reactions for Zach Wilson’s best day at Jets’ training camp.

Zach Wilson, on his birthday, off to a hot start. Completes 4 straight in one period. Conklin, Berrios, Smith and Uzomah. Pass to Conklin a nice, second-read throw. #Jets

Nice pass from Zach Wilson. He found Conklin deep down the seam, splitting the safeties. Big gainer. Hit him in stride #Jets

Zach Wilson is having his best day of camp. Looks very comfortable today.

Reports Surface that Flacco Is Outplaying Wilson at Jets’ Camp

Prior to Wednesday, there had been several reports that Wilson was struggling during camp.

In fact, multiple observers have dubbed 37-year-old Joe Flacco as the Jets’ best quarterback over the last week.

Check out some of the reports below.

Joe Flacco throws the tightest spiral in the NFL pic.twitter.com/w3voG8IWXh

A former Super Bowl champion, Flacco has thrown for more than 40,000 yards during his NFL career.

The veteran played well in relief of Wilson last season, completing 64.7 percent of his passes for 333 yards with three touchdowns and no interceptions.

This will be Flacco’s third season with the Jets.

Zach Wilson Turns 23 Today, Has Some Birthday As Tom Brady

Wilson turned in his impressive performance on his 23rd birthday.

Wilson was in elementary school when he learned he shared the special day with Brady.