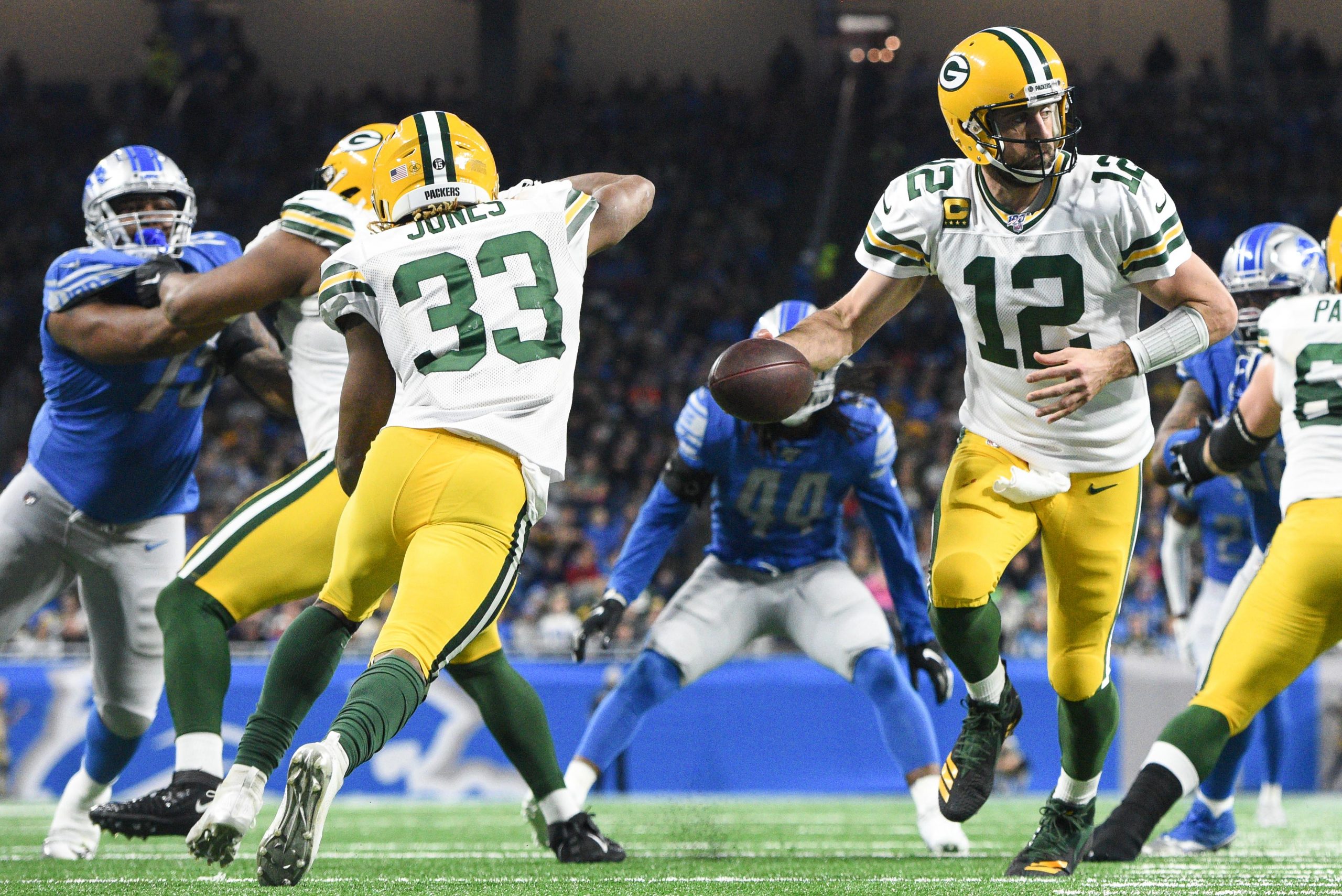 The Green Bay Packers travel to the Motor City on Sunday to take on the Detroit Lions in an NFC North clash. The Packers are 9-3 after last week’s 30-16 victory over the Eagles. The Lions are now 5-7-0 after their 34-30 win over Chicago last week under interim coach Darrell Bevell. Green Bay can clinch their second consecutive NFC North crown with a win on Sunday and a Minnesota loss to the Bucs in Tampa.

The Lions are a good passing team, but they have struggled to run the football all season, ranking 28th in the league with a mere 93.6-yards per game on the ground. D’Andre Swift is their most dangerous runner but he is recovering from what the Lions are officially calling an illness and was only a limited participant in practice this week. If they get Swift back, he makes the Detroit running game more dangerous.

If Swift cannot go, the Lions will once again turn to Adrian Peterson. The veteran is no longer the breakaway threat he was earlier in his career, but he remains a steady and smart runner who can keep the chains moving. He has a history of big games against Green Bay.

The Packers defense has struggled against the run all season. They presently rank 25th in the league by allowing 4.6-yards per rush.

The Packers need to prevent the Lions from running the football effectively to keep their offense one-dimensional. They will have to do that without Raven Greene, the hybrid S/ILB who was placed on the injured reserve this week and may be done for the season.

Green Bay will need strong games from Tyler Lancaster, Kenny Clark, Christian Kirksey and Kamal Martin if they hope to limit the Detroit rushing game. Or the Packers could use their usual strategy of taking a lead and forcing the other team to pass to catch up.

The Packers running game will be an important factor on Sunday in Detroit. Aaron Jones had a field day against Detroit in Week 2, gaining a season high 168 yards on 18 carries and scoring two rushing touchdowns. As a team, the Packers gained 259 yards on the ground against the Lions in the first meeting and if they can repeat that, they could also put up similar point totals.

Detroit’s run defense has struggled all season. They are 28th in the league while allowing 133.9-yards per game on the ground. The Packers banged up offensive line has continued to thrive despite constant reshuffling and they should be able to open holes for the running backs.

Look for both Jones and Jamaal Williams to have productive games on Sunday. If they do, the Packers should put up plenty of points and set things up for Aaron Rodgers and the passing game.

The Packers got seven sacks against the Eagles last week and put constant pressure on both Carson Wentz and Jalen Hurts. The Lions offensive line isn’t playing as bad as the banged up Eagles unit, but they have struggled for most of the season. Detroit has permitted 33 sacks in 12 games, hardly solid numbers.

The Lions may also be without starting right tackle Tyrell Crosby who hasn’t practiced yet this week due to an ankle injury. The Lions lack of depth should make things even easier for Za’Darius Smith, Rashan Gary and Preston Smith coming off the edge.

Kingsley Keke had another strong game against Philadelphia. He and Kenny Clark can get extra pressure up the middle.

Stafford is a dangerous quarterback but he is much less effective when he’s being harassed and rushed. If the Packers can get pressure on Stafford, the Lions offense will struggle to score points.

The Packers offensive line keeps adjusting to injuries but they continue to do a good job of both blocking for the run and protecting the quarterback.

If Rodgers has time to throw, he should be able to pick apart the vulnerable Detroit secondary which may without rookie CB Jeff Okudah who is nursing a groin injury and has been kept out of practice.

Elgton Jenkins did a good job filling in at center for the injured Corey Linsley while the versatile Billy Turner moved to guard while Rick Wagner got the start at right tackle.

Romeo Okwara leads Detroit with seven sacks, but no other Lions player has more than 2.5. Wagner will likely be blocking Okwara and the matchup between the former teammates should be an interesting one.

If Rodgers has time to throw, the Lions are likely in for a long afternoon.

The Lions top receiver this season has been tight end T.J. Hockenson. The former Iowa star has great size and hands and already has a team-leading 52 catches and five touchdown catches.

The Packers have had issues covering tight ends this season and will need to contain Hockenson on Sunday.

Safeties Adrian Amos and Darnell Savage have picked up their games in recent weeks and both will need to play well to help contain Hockenson and the other Lions receivers.

The Packers have been struggling on special teams all season but particularly the past four games. The problem has been felt on punt and kick coverage and in the return game.

With Tyler Ervin on IR, Tavon Austin is likely going to take over on punt and kick returns when he makes his Packers debut Sunday. Hopefully, he can add a little bit of consistency to the return game.

Punter J.K. Scott has struggled with his kicking and the team has also had issues covering punt returns. The Pack has allowed two returns for touchdowns in the last four games with Scott making a laughable effort to tackle the return man on both occasions.

Mason Crosby has also missed three extra points this season and that is something that needs to be corrected.

The Packers cannot afford to give up points and field position because of poor play on special teams.

The Packers handled the Lions easily after a rough start in Week 2. The Packers tend to play close games in Detroit, but Green Bay is stronger on both sides of the ball and should find a way to win the game and clinch a playoff berth with a little help.

The only way the Packers lose this game is if they beat themselves with penalties, turnovers and sloppy play.