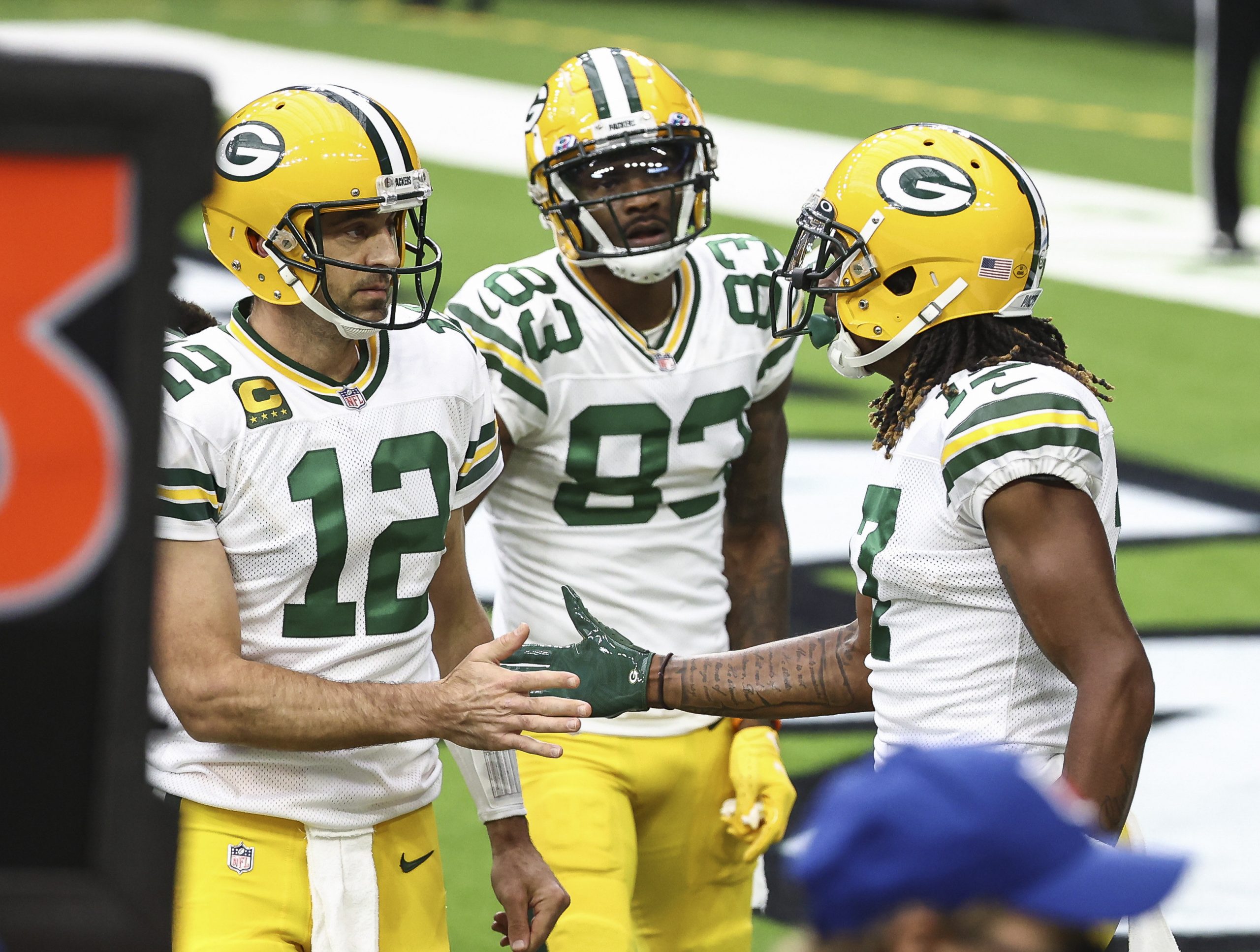 The Green Bay Packers bounced back from last week’s poor overall performance to defeat the Houston Texans 35-20. The victory improved the Packers record to 5-1-0 which includes a 3-1 road mark.

Davante Adams set a new career-high with 196 receiving yards while Aaron Rodgers threw for 283 yards and tossed four touchdown passes as the offense returned to its earlier season form.

Here are 10 things we learned from the Packers win in Houston:

Rodgers looked demoralized and out of synch last week against Tampa Bay, but he got his rhythm and confidence back against the Texans.

A-Rod completed 23-of-34 passes for 283 yards and four touchdowns. He did not throw an interception and finished the game with a quarterback rating of 132.4.

Rodgers’ decision making was solid and he did not throw an interception. The Packers also converted on 7-of-12 third-down attempts which helped keep the chains moving and put points on the board.

2. Davante Adams Is Back

Davante Adams wasn’t his usual dominant self against Tampa Bay, but he had his best game since Week 1 against a porous Houston secondary.

Adams made 13 grabs for a career-high 196 yards and a pair of touchdowns. He was truly dominant for long stretches of this game and literally turned a defender around at the line of scrimmage on one play.

The chemistry between Rodgers and Adams is remarkable to watch and when he plays like this, he shows why one of the game’s elite receivers.

3. Jamaal Williams Got the Job Done

With Aaron Jones inactive due to injury, Jamaal Williams got most of the work at running back. The fourth-year man out of BYU gained 77 yards on 19 carries and scored a touchdown. He also caught four passes for another 37 yards.

Williams is not as much of a big-play threat as Jones, but he is tough, determined and consistent. The Packers needed consistent production from Williams today and he more than came through.

Meanwhile, A.J. Dillon still didn’t play a major role in the offense even without Jones in the lineup. Dillon rushed only five times for just 11 yards. At this point, the coaching staff is still not confident in Dillon’s ability to pass protect and run routes or he would have seen the field more in this game.

4. There Were Some Great Firsts

Several Packers had good firsts in this game. Jace Sternberger and Malik Taylor each caught their first career NFL touchdowns (Sternberger had one in the playoffs last year but this was his first regular season TD catch).

On defense, rookie linebacker Krys Barnes recorded his first NFL sack and rookie defensive back Henry Black played in his first NFL game and forced a fumble with a big hit late in the game.

Rookie inside linebacker Kamal Martin also made his NFL debut and made a solid showing with six total tackles including one tackle for loss.

The Packers were unable to get any pressure on Tom Brady a week ago against Tampa Bay, but this week against Houston, they were able to pressure the more mobile Deshaun Watson.

The Packers sacked Watson three times with Za’Darius Smith, Adrian Amos and Barnes each recording one sack. The Packers also recorded four quarterback hits in this game and seven total tackles for loss.

Defensive coordinator Mike Pettine blitzed on several key plays and it paid dividends such as the key sack by Amos that forced the Texans to settle for a field goal.

Green Bay’s special teams had an uneven game at best. The big issue was the blocked punt suffered by J.K. Scott which helped give the Texans a chance to get back in the game in the second half. On that play, running back Dexter Williams whiffed on a block that would have given Scott time to get that kick away. The defense bailed out the special teams by holding the Texans to a field goal after the blocked punt.

The return game was nothing special as Darrius Shepherd had one punt return for six yards and two kick returns for an average of 18.0-yards per runback. The dynamic presence of Tyler Ervin was clearly missed.

7. The Offensive Line Got the Job Done

With All Pro left tackle David Bakhtiari out with an injury, the offensive line managed to prevent the Texans defense from sacking Rodgers. In fact, the Houston defense only had one quarterback hit in the entire game.

The Packers moved Billy Turner to left tackle and slid Rick Wagner over to the right side which was a smart move after Wagner struggled at times on the left side subbing for Bakhtiari last week. The lineup worked well.

Rodgers also did a good job of eluding the rush when he needed to and that certainly helped the offensive line’s numbers.

The run blocking was also good enough and the Packers averaged 3.9-yards per attempt if you don’t include Tim Boyle’s two kneel downs at the end of the game.

Randall Cobb reminded the Packers why he was such a good player in Green Bay for nearly a decade. The ex-Packer led the Texans with eight catches for 95 yards.

Even at this stage in his career, Cobb is a reliable and productive slot receiver, something the Packers have been lacking for most of this season.

9. The Defense Was Effective

Green Bay’s run defense was good enough. The Texans are not a good running team, but the Packers run defense held them to just 79 yards on the ground in 22 carries, a 3.6-yard average.

When you consider that Watson scrambled for 38 of those yards on seven carries, the Texans running backs gained just 41 yards all game and averaged less than three-yards per rush.

Some of those yards came after the Packers had a big lead which limited what Houston could do on the ground.

Overall, the defense also came up big when it had to. The offense struggled for three straight drives late in the third quarter through the middle of the fourth quarter. They had three straight three-and-outs and a blocked punt, but the defense held the Texans to field goals on two of those drives and forced a turnover on downs on the third. That preserved the Green Bay lead.

The Texans are not a big test, but the run defense got the job done.

The Packers have yet to lose two games in a row under Matt LaFleur. Last season, Green Bay followed each of their three losses with victories.

After the Eagles loss, the Packers won their next four games. They beat the Panthers after losing to the Chargers in Los Angeles last season. And then they won their final five regular-season games after the loss to the 49ers on November 24.

Even good teams will have bad games, but the Packers don’t allow bad performances to become a consistent occurrence and they respond well after losses.