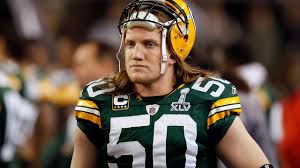 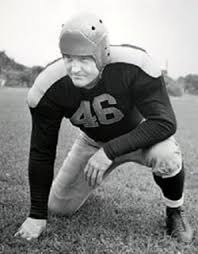 Russ Letlow was the very first draft choice of the Green Bay Packers in the first NFL Draft back in 1936. The former University of San Francisco star played both guard and tackle for the Packers for seven straight seasons and then again in 1946.

Letlow was a part of the Packers championship team in 1936, his rookie season and he contributed to another title in 1939. Like most players of his era, the 6’0”, 214-pound Letlow played both ways for the Packers. His quickness was his biggest asset.

Letlow was voted to the Pro Bowl after the 1938 and 1939 seasons and was named to the Pro Football Hall of Fame’s All-Decade Team of the 1930s.

During World War II, Letlow served in the navy for three years, which kept him away from Green Bay. He retired after the 1946 season.

Other notable Packers to wear number 46 include defensive back Hank Gremminger (1956-65) who played on three championship teams with the Packers, hard-hitting safety Steve Luke (1975-80) and versatile running back Vince Workman (1989-92). 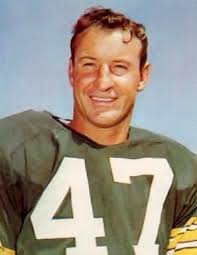 The Packers signed cornerback Jesse Whittenton as a free agent during the 1958 season after he spent two years playing for the Los Angeles Rams. The former Texas Western star finished the season on the Packers 1-10-1 squad of 1958 before Vince Lombardi arrived the following season.

Whittenton liked to gamble and used his speed and ability to read offenses to get himself in position to make big plays. He led the Packers in interceptions in 1960 with six. He was an All Pro in 1961 and named to the Pro Bowl after the 1961 and 1963 seasons.

Whittenton played his best in big games. He intercepted a pass in the 1961 NFL Championship Game against the New York Giants and helped shut down receiver Del Shofner of the Giants in both the 1961 and 1962 title games.

Vince Lombardi had high praise for Whittenton in his famous book, “Run to Daylight” which was published in 1963. He called his cornerback “as close to being a perfect defensive back as anyone in the league.”

Whittenton retired after the 1964 season at the age of 30. He later played professional golf on the Senior PGA Tour and purchased part of a country club.

Other prominent Packers to wear 47 include Paul Lipscomb T (1945-49) who spent five seasons with the Pack before becoming a four-time Pro Bowler with the Redskins. 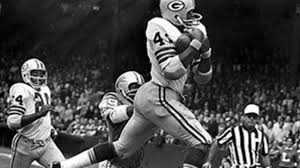 The Packers selected Ken Ellis in the fourth round of the 1970 NFL Draft. The former Southern University star became an immediate starter for the Packers on defense and also served as a return specialist. Ellis spent six seasons with the Packers and was a major reason for the team’s outstanding secondary throughout the early 70s.

In 1972, Ellis teamed with rookie Willie Buchanon to give the Packers one of the best cornerback duos in the league. The Packers allowed only seven touchdown passes all season as they finished a surprising 10-4-0 and made their only playoff appearance of the decade.

Ellis made a key play during that 1972 season. In a Week 5 game against Detroit on Monday Night Football, Ellis returned a punt 80 yards to help spur a 24-23 comeback win that served as the catalyst for that successful year.

The Packers dealt Ellis to the Houston Oilers along with quarterback John Hadl after the 1975 season in the trade that brought Lynn Dickey to Green Bay. He later played on the Los Angeles Rams team that went to Super Bowl XIV against the Steelers.

Ellis was inducted into the Packers Hall of Fame in 1998.

Other prominent Packers to wear 48 include end Harry Jacunski (1939-44) and talented halfback Al Carmichael (1955-58) who spent six seasons with the Packers before scoring the first touchdown in AFL history. 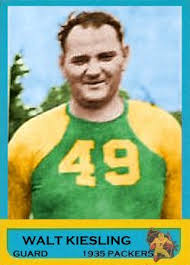 The Packers signed guard Walt Kiesling in 1935. The former St. Thomas star had already played for the Duluth Eskimos, Pottsville Maroons, Chicago Cardinals and Chicago Bears before joining the Pack.

Kiesling was a key contributor to the Packers 1936 championship team, playing both ways for the team. He was credited with a sack in the 1936 NFL Championship Game against the Boston Redskins which Green Bay won 21-6.

Kiesling was big for his era, standing 6’3” and weighing 260 pounds. He was an excellent two-way player for Green Bay and was inducted into the Pro Football Hall of Fame in 1966 and was named to the NFL’s All-Decade Team of the 1920s.

After retiring, Kiesling became a coach and was head coach of the Steelers from 1939-44. He later served as line coach for the Packers from 1945-48 under Curly Lambeau.

Other prominent Packers to wear 49 include linebacker Robert Francois (2010-13) who played on the Packers team that won Super Bowl XLV. 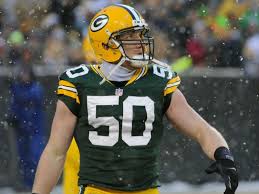 The Packers selected linebacker A.J. Hawk with the fifth overall pick in the 2006 NFL Draft. The former Ohio State star had an immediate impact and was named to the NFL’s All-Rookie Team after making 121 tackles and two interceptions in his first season.

In 2009, Hawk switched from outside linebacker to inside linebacker. He was very successful at the new position and was a big part of the Green Bay defense that won Super Bowl XLV.

He retired from football in 2017 after spending time with the Bengals and Falcons after leaving Green Bay.