The Greatest Packers Ever to Wear Numbers 26-30

The Greatest Packers Ever to Wear Numbers 26-30

The Packers drafted Herb Adderley as a halfback in the first round of the 1961 NFL Draft. When defensive back Hank Gremminger was injured, Adderley was converted to cornerback and he became one of the best of all-time.

Adderley was named to five straight Pro Bowls from 1963-1967 and was a four-time All-Pro. In nine seasons with the Packers, he intercepted 39 passes and returned seven of them for touchdowns including three in 1965 alone.

His athleticism and intelligence made him an elite cover corner. Adderley also had great anticipation to the ball in part because he was a former offensive player.

Adderley’s most famous interception came in Super Bowl II when he picked off Oakland’s Daryle Lamonica and returned it 60 yards for a touchdown to record the first pick-six in Super Bowl history.

Adderley played in four of the first six Super Bowls, two with the Packers and then two with the Dallas Cowboys in 1970 and 1971.

He was inducted into the Pro Football Hall of fame in 1980 and the Packers Hall of Fame in 1981. 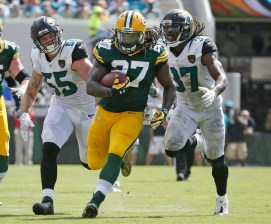 The Packers drafted Eddie Lacy in the second round of the 2013 NFL Draft. The former Alabama star made an immediate impact in Green Bay, rushing for 1,178 yards and 11 touchdowns in his rookie year. He was voted to the Pro Bowl for his efforts.

He followed that up with another strong effort in 2014 gaining 1,139 yards and nine scores in his second season.

Unfortunately, Lacy had trouble maintaining his weight and his productivity dropped in each of the following two campaigns. In 2016, Lacy gained 360 yards in five games before injuries ended his season.

The Packers let him go as a free agent the following season and he played one more year in Seattle before his NFL career ended.

Other prominent Packers to wear number 27 include CB Terrell Buckley (1992-94), a first-round pick out of Florida State who never quite lived up to expectations with Green Bay.

Willie Buchanon was the Packers first-round pick, seventh overall out of San Diego State in 1972. He made an immediate impact, intercepting a pass in his very first game and finishing his rookie season with four interceptions and three fumble recoveries. Two of his picks came in the Packers division clinching victory over the Vikings in Minnesota in Week 13. He was named the NFL’s Defensive Rookie of the Year.

In 1978, Buchanon intercepted nine passes including four in one game against the San Diego Chargers. He was a leader on the defense and in the locker room during his tenure in Green Bay.

Buchanon was an elite cover corner and one of the best players on some mediocre Packers teams in the 1970s. The Packers had only two winning seasons and one playoff appearance during his seven years in Green Bay. He finished his career with four seasons with the Chargers.

Buchanon was inducted into the Packers Hall of Fame in 1993.

Other prominent Packers to wear 28 include DB Ron Pitts 1988-90. His father Elijah Pitts also played for the Packers during the Lombardi Era.

Defensive back Mike McCoy was selected by the Packers in the third round of the 1976 NFL Draft. The former Colorado star became a starter by his second season with the team and went on to start for his remaining seven years with the club.

McCoy intercepted 13 passes during his time with Green Bay including a career best four in 1977. He also recovered five fumbles.

In addition to playing cornerback, McCoy returned kicks for the Packers during the early part of his career. His best season came in 1976 when he averaged 25.4 yards per return on 18 runbacks.

McCoy died in 2016 at the age of 62. He suffered from dementia and spent the last four years of his life in a nursing home.

The Packers acquired Green in a trade with the Seahawks in 2000. Green Bay sent cornerback Fred Vinson to Seattle for Green, but the Packers clearly got the better of the deal.

He was named to four consecutive Pro Bowls from 2001-2004 and his strong running helped keep the Packers offense strong while Brett Favre was aging.

Green became a free agent and signed with the Texans in 2007 but returned to Green Bay midway through the 2009 season. He is the Packers all-time leading rusher with 8,322 yards, just 115 ahead of Hall of Famer Jim Taylor.

Green was inducted into the Packers Hall of Fame in 2014.

Other prominent Packers to wear 30 include running back Clarke Hinkle who wore the number proudly in 1933, 35, 37-41. Hinkle was a three-time Pro Bowler and a four-time All Pro who was inducted into the Pro Football Hall of Fame in 1964.