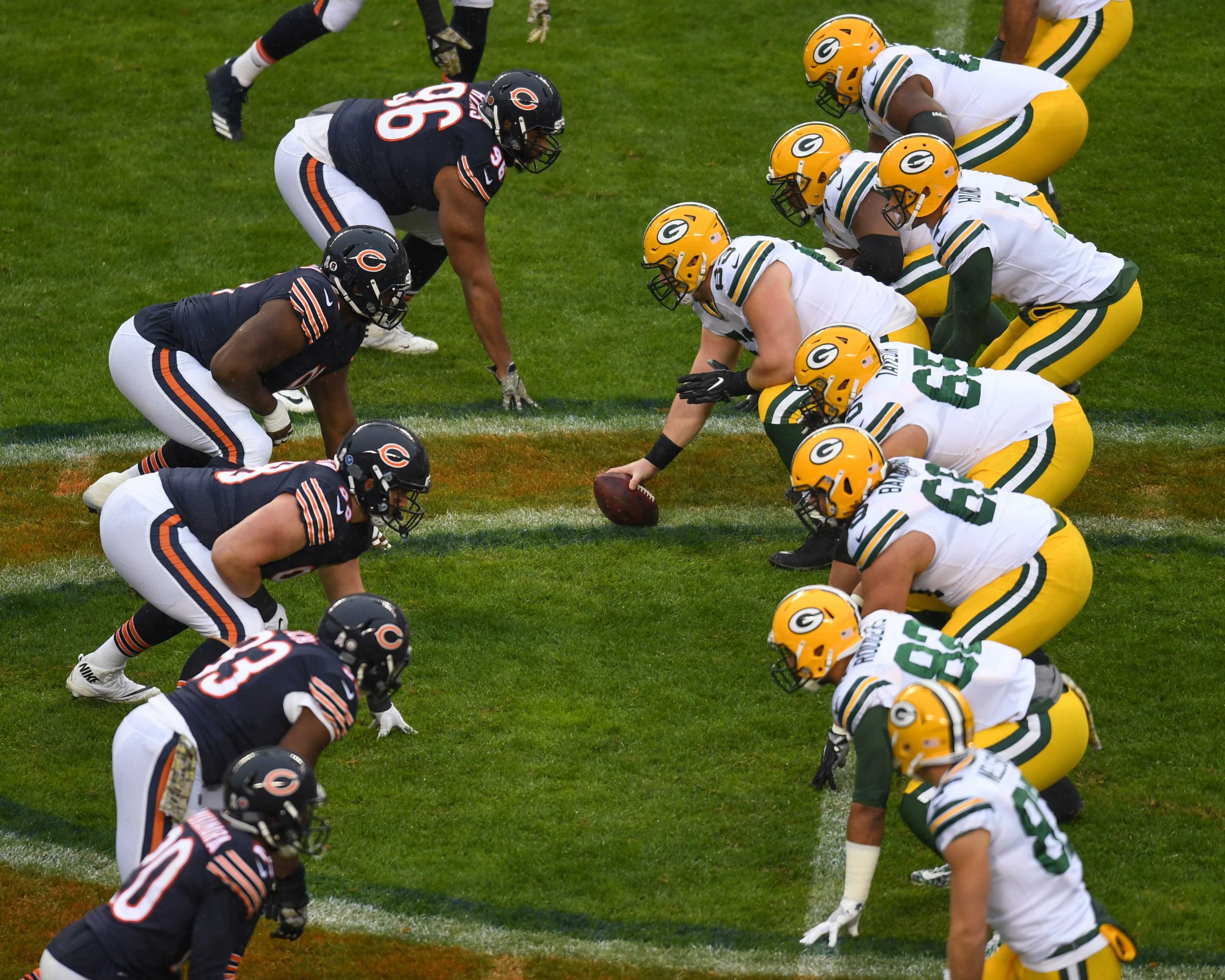 There is no rivalry in the NFL older and more intense than the Green Bay Packers and the Chicago Bears. These two teams first met in 1921. OK, the Bears were then known as the Chicago Staleys, but each team’s Hall of Fame founder and coach, Curly Lambeau and George Halas, were already in place.

These two storied teams have met 195 times during the regular season and twice in the playoffs, more than any other NFL franchises. The Packers hold a 96-93-6 advantage all-time. Since 1994, the Packers are on an impressive 36-12 run not including the victory in the 2010 NFC Championship Game.

Here is a look back at some of the Packers most memorable moments in the NFL’s oldest rivalry with video clips included when possible:

The Packers beat the Bears for the first time ever before a large paid crowd of 5,389 in Green Bay. Curly Lambeau’s players earned the win on a four-yard touchdown pass from Charlie Mathys to Verne Lewellen in the fourth quarter. Moose Gardner scored the other Green Bay touchdown on a blocked punt in the second quarter.

This game marked the coming out party for rookie wide receiver Don Hutson. “The Alabama Antelope” made an immediate impact for the Packers, scoring on the first play of the game on an 83-yard touchdown pass from Arnie Herber. It was the only score by either team in the game.

Hutson went on to become the most dominant receiver of the NFL’s first 50 years and helped lead the Packers to three NFL titles over his decade-long career.

Here is a clip of Hutson talking about the first of 99 career touchdown receptions.

Vince Lombardi made his NFL head coaching debut a successful one with a 9-6 win over the rival Bears. With the victory, the Packers matched their win total for the previous season which saw them go 1-10-1.

The Bears led 6-0 in the fourth quarter when the Packers came to life. Jim Ringo recovered a fumbled punt at the Chicago 27 and five plays later, fullback Jim Taylor scored from five yards out to even the score. Paul Hornung kicked the extra point to give the Packers a 7-6 lead with 7:45 left.

Dave “Hog” Hanner tackled Chicago’s Ed Brown in the end zone for a safety in the final minute and the Packers won 9-6.

In celebration, the Packers lifted Lombardi on the shoulders and carried him off the football field. Nobody knew it at the time, but the Packers had just started of one of the greatest dynasties in NFL history.

Kicker Chester Marcol led the league in scoring in 1972 and 1974, but he never scored a touchdown over the course of his NFL career until opening day of the 1980 season.

The two teams engaged in an old-fashioned defensive struggle with the Packers holding Walter Payton to just 65 yards on 31 carries. Neither team was able to find the end zone and the game was even 6-6 after 60 minutes of play.

Marcol lined up to kick a 35-yard field goal in overtime to win the game. Bears lineman Alan Page blocked the kick which bounded right back into Marcol’s arms. The shocked kicker ran the ball around the left side and into the end zone for the game-winning score.

Later, it was learned Marcol was under the influence of cocaine that day and the Packers cut him a few weeks later. Marcol eventually straightened out his life and is now a drug counselor and speaker.

The Bears had won eight straight games over the Packers during Mike Ditka’s coaching heyday and of course they won Super Bowl XX with a dominant defense in 1985. Meanwhile, the Packers had struggled through the mid-80s and although they played them tough, they couldn’t find a way to beat the Bears.

But in 1989, quarterback Don Majkowski and the cardiac Pack found ways to win close football games. “Majik” found Sterling Sharpe on a fourth down play with just 32 seconds left on the clock to tie the football game and Lambeau Field went crazy.

But a penalty flag called the play back after an official ruled Majkowski was over the line of scrimmage when he threw the ball. The replay officials overturned the call and Lambeau Field erupted when it was announced the game was tied. Chris Jacke’s extra point gave the Packers a 14-13 win over their hated rivals for the first time since 1984.

Brett Favre threw three early touchdown passes to lead the Packers to a 27-24 win over Chicago on Monday Night Football. The highlight of the game was a 99-yard touchdown pass from Favre to Robert Brooks which gave the Packers a 21-0 lead early in the second quarter.

Favre finished the game 21-for-37 for 312 yards and three touchdowns. Brooks had eight catches for 161 yard and two scores.

Favre’s consecutive game streak was in jeopardy due to an injured ankle and he was a game-time decision for the Packers. The Gunslinger managed to play and responded in Hall of Fame fashion, tossing a career-best five touchdown passes and leading the Packers to a 35-28 comeback win over the Bears.

Favre finished the game 25-of-33 for 336 yards and threw two touchdown passes to Edgar Bennett, two to Robert Brooks and one to Dorsey Levens.

Reggie White also played through a tough knee injury and recorded half a sack and tipped a pass to lead the Green Bay defense.

The Packers needed a win to clinch a playoff berth in the 2010 season finale and they had to go to Solider Field to get it.

On a cold day, defenses dominated. The game was tied 3-3 in the fourth quarter when Aaron Rodgers put the Packers ahead on a one-yard touchdown pass to tight end Donald Lee.

The Bears drove down the field in the final minutes and attempted to tie the game, but cornerback Nick Collins intercepted Jay Cutler’s pass to seal the victory and send the Pack to the playoffs.

The Packers and Bears met for the right to go to Super Bowl XLV. Green Bay led early on a one-yard touchdown run by Rodgers and a four-yard scoring dash by James Starks.

But in the fourth quarter, the Bears rallied behind third-string quarterback Caleb Hanie who led a drive that pulled Chicago to within a touchdown.

Then, the Green Bay defense came through. Big nose tackle B.J. Raji intercepted Hanie and returned the ball 18 yards for a touchdown.

The Packers clinched the win in the final minute when Sam Shields ended Chicago’s last gasp drive with an interception deep in Green Bay territory. Green Bay was heading back to the Super Bowl.

The Packers needed a win to clinch the NFC North and reach the playoffs after Rodgers missed seven games due to injury, slowing down the team’s progress. Rodgers returned in time for the season finale and led the Packers to a thrilling 33-28 win in Chicago.

The Pack trailed 28-27 with 38 seconds left and faced a fourth and eight from the Chicago 48 when Rodgers avoided a strong rush from Julius Peppers, rolled out and found Randall Cobb open downfield for the winning score.

Aaron Rodgers was at his finest on this night before a national television audience. Rodgers threw six touchdown passes in the first half as the Pack rolled up a 42-0 halftime lead en route to a 55-14 win.

The six first half touchdowns passes tied a record set by Oakland’s Daryle Lamonica in 1969.

Aaron Rodgers overcame a serious knee injury and a 20-0 halftime deficit to lead Green Bay to a 24-23 opening night win over the Bears.

Rodgers was knocked out of the game in the second quarter and carted off to the locker room. By the time he returned for the third quarter, the Packers trailed 20-0.

Rodgers hit Geronimo Allison and Davante Adams for touchdowns to pull the Pack close and then hit Randall Cobb for a 75-yard touchdown pass to put Green Bay ahead to stay, 24-23.